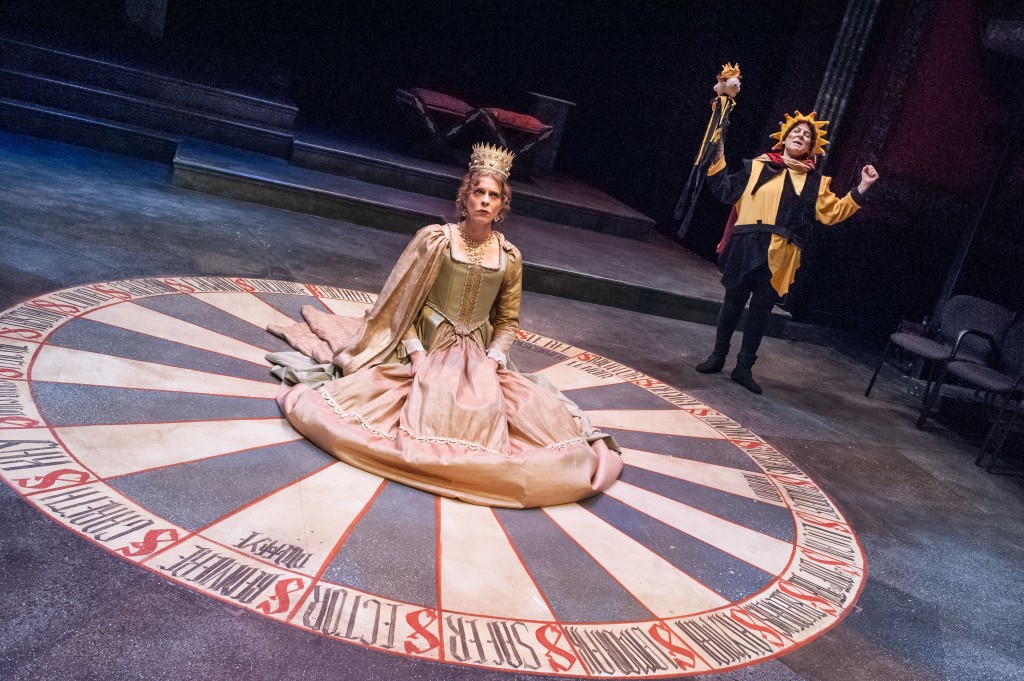 I was pleasantly surprised to find a new Shakespeare play to enjoy on a chilly December night. Actors’ Shakespeare Project tackles the rarely-produced Henry VIII by the famous bard. This play is one of his later plays but without much of the memorable depth of King Lear or Winter’s Tale. In fact, I was surprised to find much of the play to be a mere homage to Queen Elizabeth (and her ancestors). Actors’ Shakespeare Project, lead by the knowledgeable Tina Packer, carries the show, however, to great success.

Packer chose the beautiful Modern Theatre at Suffolk University, and I can’t praise her decision enough. The space is adaptable and perfect for this intimate performance. Honestly, if every Shakespeare can be staged in such a space (and with such success), then I would be a very, very happy man. The set is simple in design but widely versatile with a heavy emphasis on the “wheel of fortune” on the floor and a giant cross in the background. I always appreciate Shakespearean actors and directors who can perform a show with limited assistance from technical elements, but allow their designers to flex their artistic muscles with such skill. With a heavy emphasis on fate and the rise and fall of multiple fortunes, the designers and director do a superb job of uniting forces to achieve a unified concept for their production of Henry VIII.

At first glance, this production seems like a star-vehicle kind of show for Allyn Burrows, a company founder and general “play every Shakespeare man,” who plays the famous womanizer but troubled King Henry VIII. Yet, Burrows failed to keep my focus. Maybe I watch too much The Tudors and I am accustomed to a younger Henry; in fact, as one of my fellow reviewers informed me, Burrows may be an appropriate age for the chronology of Henry’s story for Shakespeare’s play. Still, I had a hard time imagining that Henry still had four or five more wives to go. While this particular play highlights one of the more tumultuous times in Henry’s life, Burrows seemed too worn, too beaten by life’s misfortunes, especially in the beginning and middle of the play. Burrows never felt like he had anywhere to go, though he did try with some success to show the anguish and pain of the tormented King without a male heir. Of course, I also realized that Shakespeare’s (and Packer’s) Henry VIII is more than Henry.

What should be no surprise is that Bobbie Steinbach is genius as The Fool. Steinbach is another company regular and founder, an actress who has spanned the range of Shakespearean roles with success. The surprise for me, however, is that I would enjoy a Fool. I’m not a fan of most Shakespearean Fools (with the marked exception of King Lear’s). Yet, Steinbach manages to find the perfect balance of humor and despair, lightness and depth, joy and mirth. In a word, she is brilliant. My colleague said that she was his favorite part of the play with her perfect use of her puppet-on-a-stick. I appreciated her skillful use of the language and her appropriate physicality for a female Fool. Go see the play, if only for her splendid performance.

For me, the hidden gem is the production is Robert Walsh’s Cardinal Wolsey. Walsh is a seasoned performer. He knows his way around a Shakespearean text like the comfort of a well-worn book. He makes his mark in this production, however, by telling a man’s journey with such ease and respect. Wolsey has an oft-overlooked tragedy in King Henry VIII’s story, and Walsh could find the man’s story and show the audience. As anyone who knows me, I love an actor who can make a play his or her character’s story, not stealing the show, but emphasizing that more stories than just the linear and title plot deserve our recognition. Walsh tells a brilliant and subtle story of one man’s fall from grace with astonishing success. Act I ends with an unsteady uneasiness about Walsh’s Wolsey, a man so soft-spoken, some good-graced that you worry about his Act II. Without divulging his brilliant acting in Act II, let me just say that it is breath-taking. Walsh made it the Cardinal Wolsey show, and made the play more than the typical story of one man’s temper tantrum to annul his first marriage. For that, I have a heightened respect for Actors’ Shakespeare Project.

Unfortunately, I cannot sing the same praises for the supporting female characters. Tamara Hickey’s Queen Katherine is a quiet force for much of the show with some good energy and purpose after intermission. Yet, first, she never feels the gravity of the consequences of her actions until it’s too late. I never felt like King Henry was a power to be reckoned. Additionally, and maybe it’s too much The Tudors, but I missed the Spanish accent and influence in Queen Katherine; I also missed the religious strength, zealousness, and quiet strength with growing isolationism within Henry’s court. All in all, I found her underwhelming, despite some strong directorial choices by Packer. Additionally, Kathryn Myles’ Anne Boleyn lacks some of her more interesting qualities too. Myles never has the school-girl charm, the conniving nature, and the tragic fall from grace (again) that I associate with Anne Boleyn. Her first scene with Burrows’ Henry is, dare I say, boring. Nothing excited me about their interactions and I saw history before my eyes, rather than a story spark with purpose and excitement. Myles’ Anne felt like a plot device rather than a fully-realized character. Despite my criticisms, the actresses manage the language with some success. I think my biggest concern is how Packer seems to emphasize the women in her production, when, in fact, they may be her weakest parts, despite some wonderful directing choices.

I need to mention Tyler Kinney’s gorgeous, flattering, and stunning costumes. It’s rare to see Shakespearean garb so tastefully and excellently done. While I hated Queen Katherine’s costumes (which I’ll chalk-up to a disagreement regarding the character), most of the other costumes are spot-on and brilliant. From the fabric to the colors to the cut, everything accentuates Packer’s beautiful production in the intimate Modern Theatre. Also, Daniel H. Jentzen’s lighting was a spectacle itself; with strong transitions, color palettes, and ingenious projections, Jentzen makes his work an artful touch to this play’s story and moments. Finally, despite my bias as a fellow alum, Alexander Sovronsky’s orchestrations are perfect. From the moment the play begins, Sovronsky’s music transports and elevates the play with his soaring original compositions with recurring themes and motifs worthy of a soundtrack. The work perfectly transitions and accents the majestic and turbulent times of King Henry VIII’s court.

Overall, Actors’ Shakespeare Project’s King Henry VIII surprises for its fresh takes, brilliant supporting characters, and genius technical elements. This rarely-produced work won’t last long; the play runs at the Modern Theatre at Suffolk University only until January 5, unfortunately. However, the troupe still has two more exciting works on the horizon: Anton Chekhov’s The Cherry Orchard and Shakespeare’s As You Like It round out this company’s stellar tenth season.

A Craigslist Cantata
This Is The End
FringeNYC: From Possums to Chupacabras