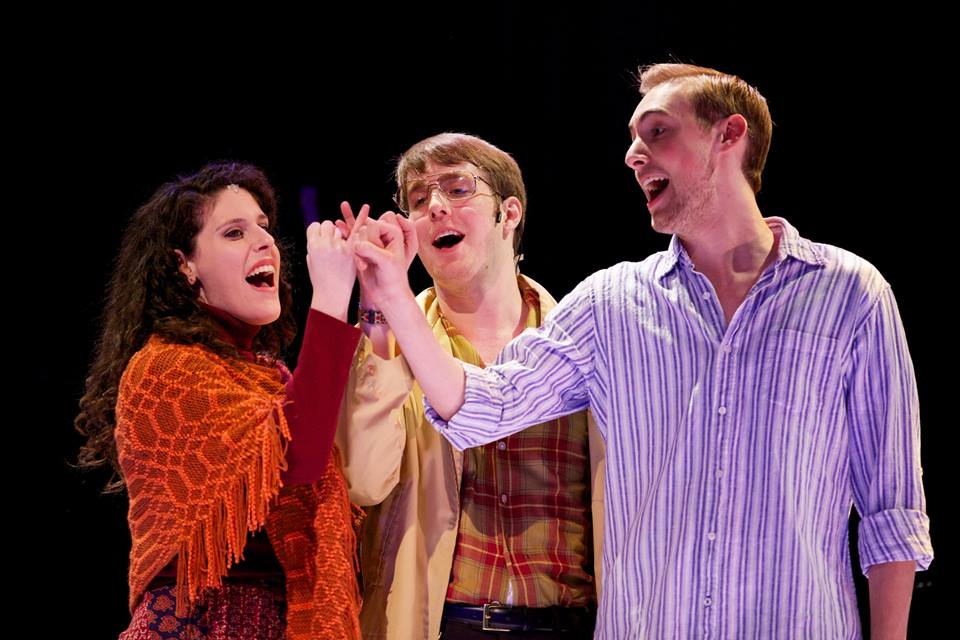 Characters in theatre almost always know more about themselves than audience members; the characters have lived in a fictional world before the play’s action. However, it’s a rare treat when an audience knows more about the play’s world and characters than the characters themselves. Such is Sondheim’s Merrily We Roll Along, an innovative musical (for its time) which is told in reverse chronological order. Before Last Five Years, Sondheim played with time by asking how we move along, the possibility (and destruction) of our dreams, and the winding story of our lives. Yes, the musical is a wonderfully simple re-telling of the play of the same name by George S. Kaufman and Moss Hart, but updated to 1957 to 1976. The book by George Furth, however, is clunky at best, and downright confusing at best. Interestingly, some of the original productions were so confusing and off-putting to audiences that the characters (famously) donned sweatshirts with their characters’ names to help the audience understand the plot. Perhaps we’ve come a long way in our appreciation for non-linear plots, or perhaps the Boston Conservatory production casts strong and memorable performers to make the characters come to life. The show is not without faults, both on the fault of the shoddy book and structure, and some lackluster and uninspired moments in the directing and acting. However, it’s such a fun ride that you can’t help rolling along with them.

The musical focuses on three friends: Franklin Shepard, the now rich and famous songwriter and film producer; the plucky but love-sick, turned-bitter Mary Flynn; and the quiet and inspired Charles Kringas, Frank’s best friend and lyricist. A quick note: any synopsis may be more confusing than seeing the play itself; all of the spoilers are given for you, but, like the musical, the journey is more important than most of the plot points. And watching these characters’ journeys is spellbinding. Easily one of the best performances of the evening is given by Paige Berkovitz as Mary Flynn. Berkovitz throws herself into Mary’s story, knocking back a few tall ones like a pro in the opening scene. But it’s her evolution as a person, as we see Berkovitz shed layer after layer of this complex character before our eyes in each scene. In each moment, we see Mary react to some new piece of information and the audience responds with her, understanding more and more how she ended up as a bitter and jaded woman. It’s truly astounding that Berkovitz rebounds with seemingly more energy in each scene, showing the once happy and optimistic Mary, leading to the trio of the iconic song, “Our Time,” in the musical’s closing moments. It’s also her ability to build outstanding and individualized chemistry with each of the other characters which makes her Mary Flynn that much more memorable and interesting. Not only do her relationships tell you something more about Mary Flynn, but Berkovitz also helps explain the other characters through her Mary Flynn’s reactions to and interactions with them.

Few actors can match Connor Baty’s fire within him. The passionate young man lights up the stage with his electric presence. You know how sometimes your eyes are drawn to a performer and you can’t quite discover why? Well, that’s what I like to call the “It” factor, and Baty has it in spades. Charley Kringas is a tough role to play; he’s entirely absent from the opening scene (just a touch of foreshadowing there) and his most emotional moment is in his first scene. From there, we get to see the slow evolution of a man who has lost all of his dreams. Baty’s finest moment is his dynamite performance of “Franklin Shepard, Inc.,” where he makes the audience almost rise to their feet. It takes a talented performer of any age to act and sing Sondheim; even as a young adult, Baty understands and works Sondheim’s lyrics and melodies to his full advantage, showing that he has much promise as a musical theatre performer. While he shines in his biting cynicisms of his former best friend, Baty dazzles again and again as the evening goes on because his relationship with Berkovitz’s Mary feels so real and truthful. You can almost feel how the characters instinctively understand each other, with Berkovitz and Baty sharing side glances, knowing nods of comfort, and gentle touches and embraces that perfectly define best friends. This dynamic is incredibly hard to master as you can look disinterested and indeed only together for the circumstances of the show’s plot, or you can look so interested that it borders on romantic (or creepy and fake). Berkovitz and Baty walk the line of intimate with boundaries, exactly how I imaged these best friends interacting with each other after all of these years gone by.

And at the center of the action is the charming Franklin (Frank) Shepard, played with equal charm by Andrew Tighe. Is Tighe the best actor? Not yet (his performance grew on me but the opening scenes were painfully stilted and artificial). Is he the best singer? Not for Boston Conservatory, though warms up nicely especially by “Good Thing Going” with Baty’s Charley. Tighe has charisma and presence to last hours. You never get bored watching him. Acting and singing you can teach with time, patience, and the right teachers. Stage presence? No, sir. Tighe easily carries the show on his shoulders, making his Frank more than the sum of his parts, but an increasingly interesting man of hopes dashed and dreams unclaimed. Such talent keeps the show from being a wishy-washy tale of has-beens and despair. Yes, Baty, Berkowitz, and Tighe embrace the conflict in each scene making the story (though we all know the ending) exciting and engaging to watch.

Some of the other characters aren’t so lucky. Caroline Lellouche’s Gussie Carnegie is a sexy starlet who almost hits the right notes, however, there is something missing thorough-line missing from her story. Maybe I missed a key moment but I felt like I couldn’t find Gussie’s climax, her switch, her change which took her from producer Joe Josephson to Franklin Shepard. These defining moments are especially hard, but even more important, because the story is told in reverse chronological order. Again, we know what happened, but the why becomes even more important. Even more confusing is Beka Burnham’s Beth Spencer. While she also grows on me, I can’t quite understand her character at the end of Act I with the famous ballad, “Not a Day Goes By.” Almost like a switch is turned on, she is vibrant and interesting and dare I say sweetly adorable in Act II and only grows more so until the musical ends. So what happened? Did the actress wake up during intermission? Did Furth (who did a mediocre job, at best, writing and adapting the book from the original play) mess up by including too much of Beth’s important backstory during intermission? Or a combination of both?

I need to credit the director, 2013 My Theatre Award Nominee Paul Daigneault, for his work on this piece. While it’s far from perfect (but what university production isn’t?), he tells the story in a moving way, such that you understand story and characters, unlike the popular critiques of the original production. While I wouldn’t say that the direction was anything memorable, there is something to be said for clarity and simplicity. The musical is complicated enough, and Daigneault seems to understand this by letting the music and story do its work. With such a strong trio of leading characters, most of Daigneault’s work is done. He does, however, add a rather large ensemble. While I understand the need to give students opportunities to work on main-stage productions, the ensemble almost feels too much, losing much of its intimacy in its talent and star-power. Because, let’s be serious, the majority of Boston Conservatory students are talented. However, one thing that they need to learn is how to appear in an ensemble because (let’s be serious again) they will most likely play many more ensemble roles than leading roles in their lifetimes. With such a catchy and moving title number (with which I never tired), the musical almost demands intimacy on this special journey through time. While most of the ensemble members approached their roles with tenderness and the much-needed simplicity, others almost demanded our attention to tell us that they had a solo. Listen, it’s not an audition; if we want to fall in love with you as an ensemble member on-stage, it’ll happen when you least expect it through your honest performance. In that respect, Daigneault could have approached the production with a tad keener eye for when performers wanted to push beyond their boundaries.

I’m mostly going to gloss over the choreography. I found the movement charming, though a bit disorganized. Sarah Crane shows some promise as a young choreographer, but Daigneault (and the production) might have benefited from cleaning some things up during tech rehearsals. 2013 My Theatre Award Nominee Daniel H. Jentzen deserves acknowledgement and accolades for his lighting design; it perfectly transitions between the musical’s many locations, moods, and time periods, while adhering to the production concept’s simplicity in storytelling. The projections were an excellent touch by Seaghán McKay, and Jentzen and McKay worked seamlessly together to get a holistic design (in fact, I thought that they were designed by the same person!).

Overall, the production was an enjoyable night at the theatre. As the young budding Broadway stars, Boston Conservatory students provide much promise for the future. However, like Frank in Merrily We Roll Along, they need to be open to the criticism as they shape and define their craft, realize their goals and dreams, and work together to create outstanding theatre. Merrily is ultimately a showcase for the trio of leading talent, but with such a strong trio, I was fine with going along for the ride.