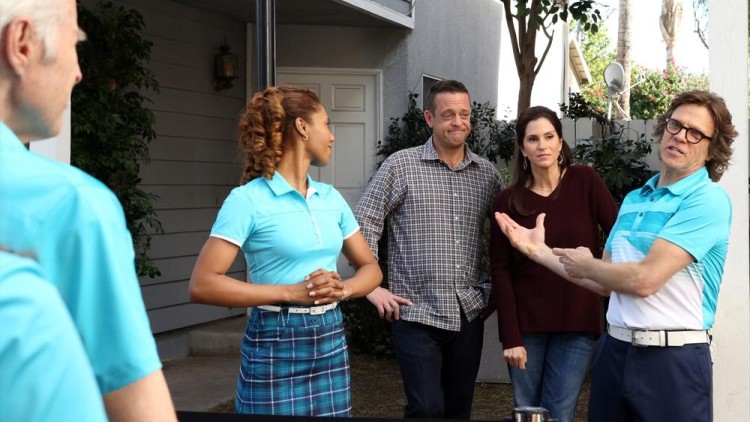 Save This Show: ABC’s The Neighbors

In last week’s second season finale of ABC’s alien sitcom, the characters wondered if there was a future for them on earth. “I’ve heard rumours about ABC Family” said teenager Reggie Jackson only to be shrugged off by his Supreme Leader father Larry Bird. While I would not endorse a move to ABC Family (I like that there’s a good family-friendly sitcom on broadcast ABC, like Boy Meets World back in the day), I’d rather The Neighbors move than cease to exist. I like The Neighbors a lot. In ABC’s generally decent comedy lineup, I’d say it ranks second- just under The Goldbergs and just above Trophy Wife (third if Super Fun Night were still around). So why does it feel perpetually poised to disappear?

I think it’s because, with such a wacky concept, there are a lot of people who think they know what the show is who do not actually watch it. It’s a show that sounds crazy when you read a synopsis but is really very funny and grounded, in practice. Creator/showrunner Dan Fogelman very quickly established a world where the comedic (and sometimes dramatic) possibilities far outstretched the initial culture clash when a family of humans moves into an alien-occupied suburb. The Bayonne-bred Weaver family is far more interesting and independently amusing than I at all expected from the “normal” foil to the Zavronian Bird-Kersee clan. My favourite is Clara Mamet’s deep and dry teenager Amber (Clara is slowly establishing her dominance as my favourite Mamet, with tough competition from sister Zosia and father David) but every member of the Weaver family is loveable and hilarious without being broad enough sitcom tropes to be able to call them “the dumb one”, “the troublemaker”, “the neurotic mom” or anything else quite so simple (you hear that, Modern Family?).

The Bird-Kersees, meanwhile, are broad on the surface (obviously, they’re the wacky aliens on a network sitcom) but, in their best storylines, have been known to hit on some interesting human truths (and occasionally pull out a grand musical number). As they learn to navigate the human world, Jackie, Larry, Reggie and Dick have struggled for respect against high societal and parental pressures, they’ve been forced to take menial fast food and coffee shop jobs to support their family, they’ve dealt with insecurity and lost love and being the weird but gifted kid who has to choose between fitting in and being himself. More often than not, the emotional arcs of The Neighbors‘ aliens are more human than the arcs lesser shows give to their actual humans.

The writing is consistently sharp, blending sentimentality with biting wit and meta commentary brilliantly, and the “everything is new” conceit allows the writers to implement interesting storytelling forms (musicals! sitcom tropes!) by simply introducing Larry and Jackie to the format with a self-aware nod at the top of the show. It also sports one of the most consistently funny and versatile casts on any network (here’s to you, Toks Olagundoye! I also loved Tim Jo’s subtle work as Reggie this year).

The end of season two shifted the setup of the series in a way that opens a lot of new doors for a possible third season- sending the majority of the Zavronians back to their home planet and putting their houses up for sale to be occupied by humans (including DJ and Steve from Full House! Please let them be regulars next year, playing DJ and Steve in the greatest universe-expanding crossover ever). There’s a lot of unexplored story territory there- let’s hope ABC is interested in exploring it.