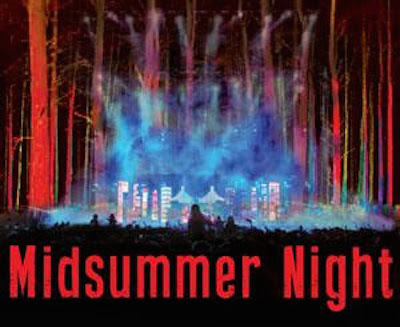 Lord, What Fools These Actors Be

Ever have one of those college English papers which you can’t seem to write because you’re worried that the professor will judge you for your crazy ideas? What if you just wrote your ideas to him or her in a musical adaptation of the most accessible Shakespeare plays and called it a night? Midsummer Night: a musical (loosely adapted from Shakespeare’s A Midsummer Night’s Dream) attempts to do just that. I can’t explain why Suffolk University wasted their time on this trite adaptation or how I sat through the production, but here goes nothing.

Despite its billing as a loose adaptation, the musical is surprisingly faithful to its source. Why is it surprising? Because it features no less than 25 musical numbers in 100 minutes. That’s quite a feat right there. Set in Athens, Georgia in the campgrounds, main stage, and back stage areas of PEASEBLOSSOM traveling rock festival, and the nearby forest, Midsummer Night is a re-imagining of the classic play at a rock concert. That’s it, folks. For some reason, someone (namely the book, music, and lyric writers Brendan Milburn and Valeria Vigoda who took the adaptation conceived by Janet Roston and new music by Gene Lewin) decided that a rock concert was not only a suitable but preferable location for A Midsummer Night’s Dream. O-Kay. I’m all for literary embellishments, and, please, I love modernizations. But say something with your work. Just because The Tempest works on the moon doesn’t mean you’re adding anything to the play by setting it there. Taming of the Shrew may work as a role-playing scene during a domestic violence meeting, but really there are some lines of sensitivity that should not be crossed. This production is harmless, but unimaginative. The musical adds little, if anything to its source. /End rant.

However, director Marilyn Plotkins makes this production a pleasure to watch. The play focuses more on the spectacle of the rock concert (mixed with circus and acrobatic tricks? What concert features more backflips than dancing? Don’t answer that . . .) than the verbal somersaults of its actors. Richard W. Chambers creates an incredibly immersive and flexible space for the actors to play, and play they do! With a giant hoop as a swing, a rope to glid across the stage, and grids to climb, the actors have an assortment of visually interesting set pieces to use. Kimberly Smith does a commendable job of using her lighting design to vary the mood and location for the story, while consistently using the bright and flashy lights of a rock concert. Underneath both of these otherwise strong technical elements, I wish the production had said something. What if behind the bright lights were dull undertones to indicate the sadness behind the flashy lifestyle? What if the set looked more hollow and paper-thin upon closer inspection? What if the set pieces slowly disappeared or otherwise changed throughout the production? I don’t have an answer, but I wanted them to improve the tacky source material with their own artistic brilliance. As it stood, the technical elements were solid, but didn’t transcend the production into anything noteworthy.

The Boston Music Theatre Project (BMTP) at Suffolk University, under the direction of Dr. Marilyn Plotkins, “nurtures new musical work of exceptional promise in its formative stages through readings, workshops, and productions.” First, this is not a work with exceptional promise. My drama teacher and I used to laugh at Baker Plays and their corny musicals, and this musical feels like it was a page right out of their catalogs. Second, the production didn’t do anything to improve or expound upon the weak musical to propel it based its “formative stage.” Perhaps the acrobatic circus tricks were meant to re-imagine this reimagining, but all they did was confuse and annoy me. Why did they annoy me? I’m glad you asked. Admist the rough and tumble of the circus life came the rough and tumble of this cast trying to speak Shakespeare. The actors had a lot on their plates: try singing, dancing, flipping into mid-air, and running across the stage like a banshee on a midnight jaunt. Then let’s add William Shakespeare’s words as dialogue to the mix.Some cast members seemed to have some understanding of the language, but others moved with a breakneck pace through the dialogue that left your head spinning and your heart aching. Leading the cast, Ashley Wright’s Puck (Robin Goodfellow, Night Goblin, etc.) is a joy to watch. With snarky side glances and a devilish grin, Wright lights up the stage in subtle ways, which, in the intimate Modern Theatre at Suffolk University, make her performance a delightful sort to watch. On the other end of the spectrum, with some charm and goofy grace, Bobby Zupkofska as Bottom entertains the audience with the foppish character’s enthusiasm for the stage. While I disagreed with the one-man Pyramus and Thisbe, I enjoyed parts of the performance and I appreciated the writers giving Bottom more and cutting the other needless mechanicals (for timing). Zupkofska plays some of the same jokes and humor a bit too far (falsetto is one of those been-done one-laugh moments), but he plays the role with the exact exuberance that you know he understands his source material and place in the production.

Kathyrn Gast’s Titania was a surprising pleasure to see and hear. While the writers deprived Titania (and Gast) of some key moments, Gast makes the most of her role through her fierce and independent portrayal of the wronged “Queen.” Her singing is easily the most engaging and powerful, supported by her All Stars, Cobweb (Kimberly Wallace), Moth (Devin Scott), and Mustardseed (Morgan Pritchard). This trio had the perfect blend of back-up dance moves, interesting acting choices, and tight harmonies to make them one of the strongest additions to this musical. I wish the same could be said for the lovers. Sigh. Their story always plays second (third?) banana to the more comedic mechanicals and the more interesting fairies, and this production seemed to heighten the distance. While Kevin Hanley’s Lysander is charming and Vindhya Fernando’s Hermia is perhaps one of the strongest that I’ve seen, Conor R. E. Walsh’s Demetrius is campy (though with perhaps, surprisingly, the best voice among the four lovers) and Rose Garcia’s Helena is dull and whiney. Walsh and Garcia are almost at a disadvantage from the start, given their costumes, but their status as the quirky couple with the rival lover and the forsaken girl seemed played-up in this production. Their ability to read and play Shakespeare was a complete flop, making some of the scenes painful to watch and listen, trapped in a circus of Dr. Seuss rhymes. Perhaps others could enjoy it without a clear ear for Shakespeare.

The music is an uneven lot. Most of Puck and Titania’s songs were excellent, perhaps because they were in the hands of such talented performers and musicians. Kari Soustiel’s Oberon’s songs were just painful and off-putting, especially when Oberon is supposed to be such a powerful presence in the show. The lovers’ level of camp ramped up during their songs, a product of poor directing and awful musical composition, only heightening the awkward high school musical nature of the production. The score needs a solid cutting with far too many songs to support the action and many of the songs turned dialogue into song for little, if any, reason. Such inconsistency weakened the points when it made logical sense to break into song. That said, the song “Midsummer Night” is wonderfully executed and damn catchy. With such a fun opening and closing number, I wish the show’s writers had thought to limit their midsummer magic to poignant places instead of sachurate the production with music.

For all of my qualms about the production, it was entertaining and eventful. The 100 minutes flew by while offering much of the original play in exciting musical form, filled with song, dance, and acrobatics. My biggest complaint is in the production’s mission: to nurture new musical work of exceptional promise. I don’t believe the show has exceptional promise. It does little to further Shakespeare’s work except make it more accessible by filling it with mere spectacle. Unlike Peter Brooks’ adaptation, this production does not say anything about the shows’ themes or the world in which we live. With such an expansive repetoire of new work from which to choose, I would expect an exceptional university like Suffolk University to pick more progressive and noteworthy productions to support and nurture through its program. In short, the production felt like a waste for the talented performers like Gast and Wright, while diminishing the directorial intelligence of experienced and professional Plotkins. Had the writers hanged themselves in Thisbe’s garter, the play would have been a very fine musical indeed.