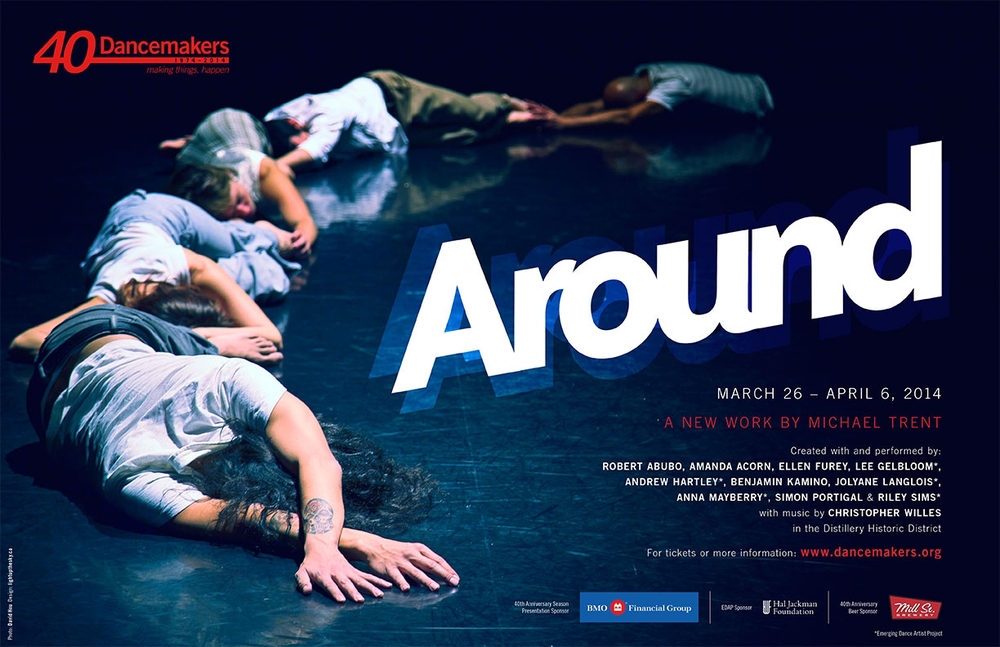 Dancemakers at 40: Learn to Listen to Everything Around

The 40th anniversary speeches have been given by Artistic Director Michael Trent and the Ontario Arts Council’s Dance Officer, Myles Warren.  The playing space is empty as we sit in the round, starring at each other.  It seems like the lights are never going to go out.  In fact, they never do.  A most appropriate choice (Kimberly Purtell) given that this play is all about encounters: between two people, groups of people; the silences, the excitement, the fear that comes with the unknown. Being “around” others in a, decidedly, more visceral way can at once break solidarity and present apprehension.  Throughout the show, audience members watch on attentively, switching from mesmerization to discomfort, even taking liberties to look at one another a little longer than usual.

Eventually different groupings of performers emerge, some explosively, others more shrewdly.  Their movements and actions are intriguing; disjointed but always suggesting either a push (away from one another) or a pull (together).  Regardless if we are watching a duet or a large group there is never a moment of synchronicity, in spite of the beautifully detailed original white costumes (Vanessa Fischer).  Like their fashion, each performer is an individual approaching connectivity. Excitedly, I begin to interpret their relationships.  Complimenting their journey of discovery are the cleverly utilized objects on stage, which become – like in the infamous theatre game – anything but what we expect them to be.  More importantly, they are vehicles for amplification, affording better articulation of what connecting with someone physically might look like creatively.  Jolyane Langlois and Benjamin Kamino start us off a little less figuratively in the first duet by playing with two corded mikes, boldly swinging them through space, even holding them up to their environment as if trying to give voice to their encounter.  In another sequence, performer Anna Mayberry lies in blissful reverie atop a fleece blanket  as an abstract alarm clock produces an all too real symphony of bird calls that are echoed beyond the white curtain surrounding us in Christopher Willes’ stunning sound score.  A most graceful Ellen Furey revolves about the entire playing space like a feathered creature.  I imagine this sequence to be about an encounter of the passionate kind, between a free spirit and, well, a more romantic lover – revealed, perhaps, by Mayberry’s dismay at waking up alone.   In a more dramatic sequence, a microphone head is slowly and intensely covered (Robert Abubo) with a plastic gel creating an excruciating sound, suggestive of deception.  Then it is run down the back of performer Simon Portigal’s white sweatshirt as he remains bent over, engrossed in a rhythmic hop – like a frog attempting to leap. Contrasting this is the very expressive Riley Sim’s soft placement of a green cloth over the second microphone while gazing into Portigal’s eyes.  The end of another romantic encounter?

All too often, we go through life lacking the time to stand still in one place to listen to the sounds, the unknown, with the same amount of attention as we place on the known.  Thanks to Dancemakers and the Emerging Dance Artist Project, we are given the opportunity to hear, and, consequently, to feel what that might be like.  The possibility this model might add to my life as I go “around” listening is exciting.  All in all, the thoughtful design, careful staging and strong focus of the performer-dancers allowed for us to put those first moments of knowing someone (anyone) under the microscope, making for one heck of a reflective evening.