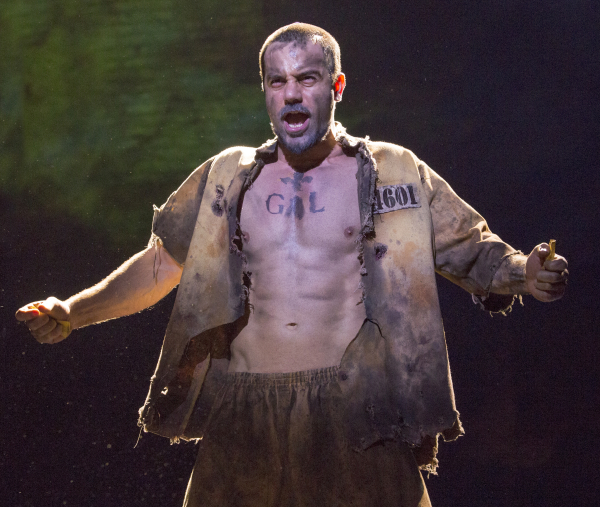 On a Saturday afternoon in 1996, I wandered into the living room just as my Dad was sitting down to watch the 10th Anniversary Les Misérables Concert on PBS. My 10 year-old self sat there next to Dad for the entire three-hour concert, pledge drives and all, absolutely enthralled. A few days later, I stole a copy of Les Miz from my grandparent’s bookshelf and my fate was sealed as a Les Miz enthusiast. I begged my parents to take me to see every production that rolled into Southwest Ohio. I belted out Do You Hear The People Sing (very poorly) in my bedroom while doing homework. Long story short, that single concert performance is the reason that I love theatre.* Despite seeing Les Miz countless times, I have never seen the show on Broadway. Until now. Six years after it last closed on the Great White Way, Les Miz has come home to the Imperial Theatre in the form of a terrific, reinvigorated production.

An epic tale of justice, redemption, revolution, and love, Les Miz is the French story of Jean Valjean who, after spending 19 years in prison for stealing bread to save his sister’s starving child, breaks his parole in search of a new life. After assuming a new identity as a factory owner and town mayor, Valjean helps one of his former factory-workers, Fantine, who is dying and pledges to raise her daughter as his own. Valjean raises young Cosette but is always weary that Inspector Javert, who has made it his life goal to catch parole-breaker Valjean, will find and re-arrest him. One day, Cosette meets and falls in love with student and revolutionary Marius. When Marius joins the June Rebellion, Valjean joins the revolutionaries at their barricades to protect his daughter’s beloved. Touching, right?

Revivals are, by nature, not surprising or novel. Therefore, the casting is often what distinguishes one production from another. The defining traits of this Les Miz cast are its youth, its physicality, and the raw emotion on display throughout the production. The pièce de résistance of this production comes in the form of Ramin Karimloo – an extraordinarily talented actor who is well-established in the West End but who is (shockingly) making his Broadway debut. Karimloo brings a pure, uninhibited voice to Jean Valjean, and he portrays Valjean with a level of grounded humanity that is unusual – the role is generally defined by Valjean’s virtuousness. Valjean grows. He is relatable. More importantly, did I mention that Karimloo is one of the most gifted vocal musicians that I have ever heard? I dare you to make it through his glorious and poignant rendition of Bring Him Home without a tear or two (or, in my case, a complete emotional breakdown**). Colm Wilkinson will always be Jean Valjean, but Karimloo is one of the best actors to ever perform this iconic role. Karimloo’s onstage counterpart, Will Swenson, is as fine a Javert as I have ever seen. Swenson portrays Javert’s unmitigated pursuit of justice with such ferocity that Javert’s despair is palpable (and believable) when he finally learns of Valjean’s true nature. Swenson and Karimloo’s cat and mouse game is also incredibly physical, and the entire production is far more violent than any Les Miz production that I have seen – to great effect.

Rounding out the male leads, Andy Mientus is young and charming and has a solid voice befitting of the part. Kyle Scatliffe was similarly well-cast, and I enjoyed seeing this rising star invigorate Enjolras with more than just a powerful voice. Scatliffe has the stage presence that makes him a believable leader of the revolution. In fact, the only person on stage who made a more believable leader of the revolution was young Gaten Matarazzo who portrayed the precocious Gavroche with the perfect amount of sass and spunk. While the revolutionaries were heading into battle, Keala Settle and Cliff Saunders were making fun of it in the loudest and most garish way possible as the Thenardiers. They are uproarious and energetic, and they excel at physical humor.

I wish that I was as positive about the females in this cast, but they are, unfortunately, not quite as memorable as their male colleagues. Caissie Levy does a fine job as the forlorn Fantine, but nothing about her performance is particularly inspired. I was thrilled to see Tony-Award winner Nikki M. James on stage again, having last seen her in Book of Mormon, but there was something surprisingly lackluster about her performance as Eponine. Eponine is arguably the easiest person to empathize with, but James failed to breathe emotional depth into her character, and her voice was a bit grating at times. Samantha Hill is a welcome addition to this cast. I detest Cosette as a character (I think that most people do), but, thankfully, Hill does not simply act like a fragile doll on stage. She infuses Cosette with a bit of life. She also has a beautiful, operatic voice that resonates.

This production also distinguishes itself in set design. While certain pieces like the barricade remain the bedrock of the set, Matt Kinley’s worn and wooden set design sprawls out into the audience, and the projected set pieces liven up sequences that have depended solely on lighting design in the past, such as Javert’s suicide and the sewer escape. That is not to say that the projections are uniformly successful. Javert’s suicide has always been a challenge to re-create on stage, and the current effects come across as a bit ridiculous.

During intermission, a girl next to me who was seeing Les Miz on stage for the first time commented on the show. Her review? “This is awesome – WAY better than the movie!”  I could not help but smile. I am not going to belittle the movie – cinema is a different artistic medium with its own challenges. But a little part of me is disappointed to think that many people only know Les Miz because of the movie. Unlike me, they do not get chills every time the Prologue starts, in anticipation of the curtain rising. Unlike me, they do not sit through intermission, riding high on endorphins from One Day More and clinging to the delusional hope those kids will actually stage a successful revolution this time. And, unlike me, they do not lament the fact that they forgot tissues (again) as Valjean hits those pristine high notes in Bring Him Home. However, there is a first time for everything and no time like the present to experience Les Miz for the first time.

Personally, I cannot wait to take my Dad.

Les Miserables is playing at the Imperial Theatre

*Yes, I appreciate the irony of that statement given that it was on PBS.

**Thanks for the tissue kind old man who was sitting next to me – you are a saint.