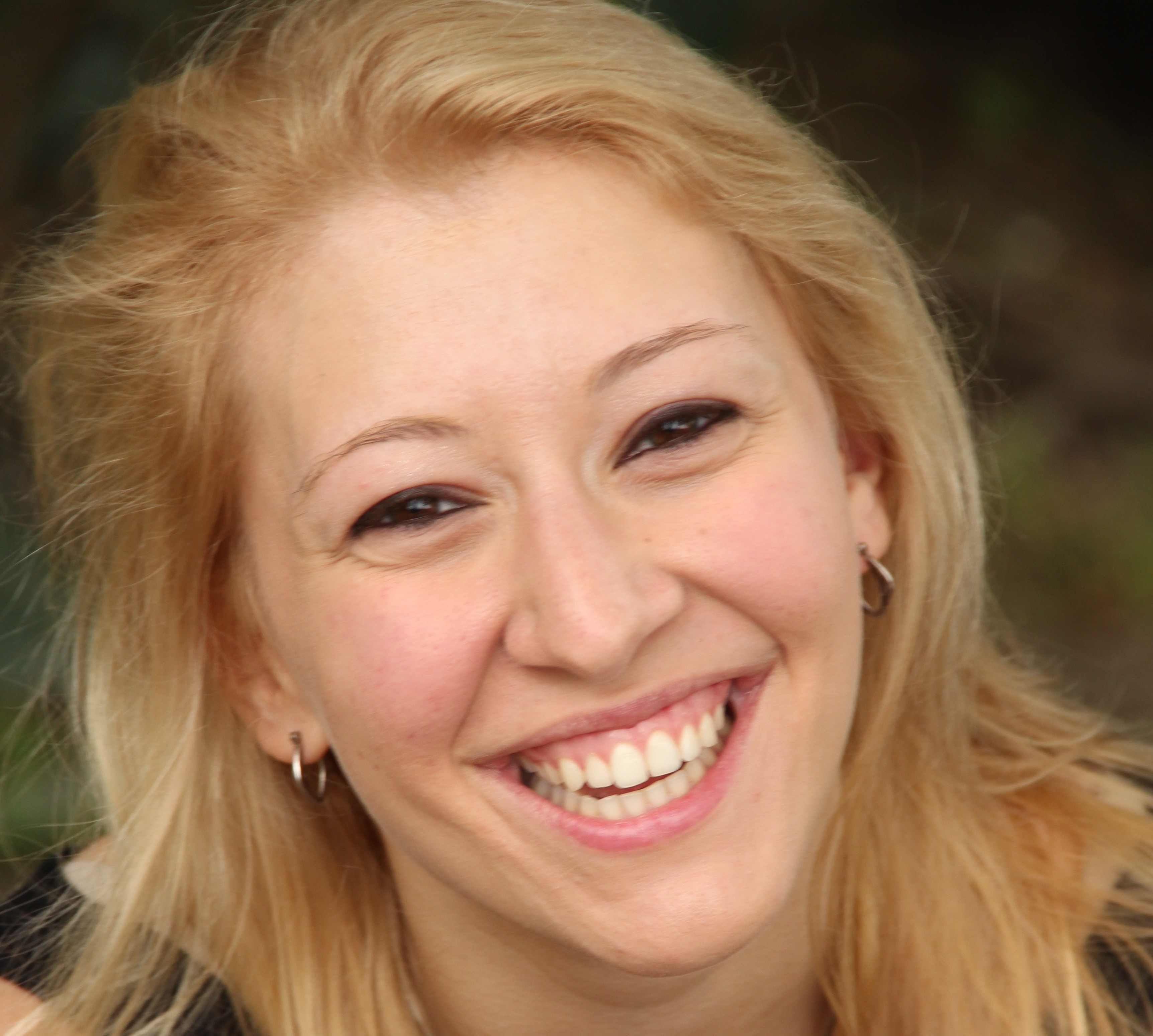 Fierce triple-threat Jackie Theoharis is a recent graduate of Brandeis University where she produced and performed in a senior thesis of tick, tick . . . BOOM! for which she was nominated for Best Supporting Actress in a Musical for her role as Susan. No stranger to the stage (or the rain), Jackie is known throughout the Greater Boston theatre community, both professional and fringe, for her dynamic personality, strong characters, and infectious laughter.

Jackie, congratulations on your second My Theatre Award nomination (2011 My Theatre Award Nomination for Best Supporting Actress). Can you tell us about your performing history? When did you start? What was your first role/line? Where and what have you done since then?
Thanks so much, Brian! I’ve been performing since age four. My first role was as Nana in Peter Pan at the Emerson Umbrella (through the International Dance Project, which is now in conjunction with [Alexander Children’s Theatre School]). I believe my first line was “ruff”, but there’s a chance it might have been “woof.” Since then, I have performed with leading theaters in Massachusetts, such as New Repertory Theatre, Wheelock Family Theatre, Hanover Theater, Reagle Music Theatre, Blue Spruce Theater, Woodland Theatre Company, and Turtle Lane Playhouse (RIP).

I know that you have worked with a lot of different companies around the Boston area; you’re prolific! What encourages or draws you to work with certain companies or audition for certain productions?
Ha! You’re awesome, thank you so much. Throughout college, I really made it a priority to get myself out there in the Boston theater scene. I auditioned everywhere imaginable just to at least get my name out there and really make myself as versatile as possible when it comes to performing.

tick, tick . . . BOOM! [TTB] was your senior thesis at Brandeis University. Can you tell us how and why you decided on this musical? I mean, you’re certainly featured but you don’t play the lead! Why did you choose this show and role to feature yourself, and how do you think you succeeded? Did you have other back-up options?
I can’t tell you how many times I got this question from professors, etc. when I announced the show. My whole thing was that it didn’t really matter to me if I was the lead or not. My thesis didn’t have to be the “me” show. I chose TTB because I wanted to put on a production that had some sort of significance to my life and to the lives of other artists. I wanted to portray a role that showed my versatility, and I really wanted “actions [to] speak louder than words,” if you will. I have always wanted to play Susan and Karessa—I think they’re both so deep, and I was really excited to take on multiple characters in a production and show their individual journeys, pretty much at the same time (there were some scenes where I played both characters in one scene). I wanted to pull a team of artists together from the Boston area to tell this story with me, and I could not have chosen a more perfect group of people for this project. I wanted the audience to be moved by the lives and passions of these artists and to understand how important it is to follow what you love, and I was really lucky and grateful for how it turned out. I also got an A, so there’s that (yeehaw!). Even though college isn’t just about grades. Just ask my parents. (They won’t agree).

Did you have similarities with Susan, your character in tick, tick . . . BOOM!? Did you ever have a relationship like Susan and Jon?
I definitely see some of me in Susan. I think that Susan and I are both extremely hard working and strong artists who know exactly what we want but tend to put other people first before our own needs. So…we’re getting personal here (haha!) but yeah, I do see similarities with us. I’ve definitely had friendships similar to Jon and Susan. As for relationships, well…let’s keep this interview short.

What was your favorite moment or song in tick, tick . . . BOOM!?
My favorite moment was a really tiny moment during “Come to Your Senses.” I always thought that this song defined the show. I think that all the characters in TTB forget to come to their senses at some point in the story and realize their mistakes later on. Karessa is supposed to be performing the song at Jon’s workshop, so the song was a performance in a performance. Towards the end of the song between two phrases I looked back at Jared, who was playing my Jon. Every time that happened, I felt a connection with Jared that broke all of our shells and made every character in the show come to their senses in some way. A lot of feelings were happening there for me. That was probably my favorite moment, even if it was super tiny.

I SAW THAT MOMENT. It was electric and palpable! I mentioned in Jared Walsh’s interview that you have phenomenal chemistry together; I noticed it in Spring Awakening years ago! How did you develop your on-stage relationship  in  tick, tick . . . BOOM!? Why do you think you have such natural chemistry with Jared?
Jared is amazing – both as a performer and as a friend. I absolutely love working with him. We’ve been close since Spring Awakening and hadn’t done a show together since then, so this was a really special experience for us. We hadn’t done anything romantic, so this was new for us. It seemed a little silly at first because we’re such good friends, but once we got over that, it all came very naturally. He’s such a generous and natural performer and we do care about each other. I think that contributed a lot to our relationships in the show.

Who is your favorite scene partner from a show or performance? Why him or her?
I’m going to be really cliché and say my boyfriend, Ryan MacPherson. We played opposite last year in Children of Eden, and we’ve done some other smaller things together. He’s such an amazing performer, and I love him a lot and loved being able to work with him.

You have an amazing sense of humor and life about you, and it comes across on-stage in everything that you do. What or who makes you laugh the most?
You’re the sweetest! A few things make me laugh the most. Mostly, my friends, and Niles and Grandma Yetta from The Nanny. And my dog when I blow on his face.

Do you have a favorite book? Play? Movie? Song? In other words, what are some stories that move you or stick with you?
My favorite story in the world is Peter Pan. I could read the book, watch every possible movie version, and listen to Cathy Rigby be the boy who wouldn’t grow up forever and ever. The fact that it was my first show probably says something about why it’s stuck with me for my entire life.

What is the scariest thing that you’ve ever done?
Get hit by a car. I didn’t do it on purpose, but it was really scary because I couldn’t tell if I died or not. Then I needed to perform Spring Awakening immediately after. No joke.

Theatrically? This past October, a good friend of mine was directing Side Show and unfortunately two cast members got into an accident the night of their dress rehearsal and could not go on. He called me and asked if I can take over one of the roles. So, I learned all of Side Show in 30 hours and then performed it. It was terrifying. I called my sister crying right before I went on because I was so nervous that I was going to ruin the show with my lack of knowledge about the show. Then I performed it (I completely blacked out, I can’t remember a thing), and apparently people didn’t notice that I had no clue what I was doing…so there’s that!

I am sure that you have a good one so: What is your worst/funniest/most embarrassing audition story?
Oh no, so much pressure! I’m sure I have a better one, but this is the only one I could think of: I auditioned for Hair a few years ago (I was also extremely ill), and I sang “Stranger to the Rain.” My binder was really old, but I just never got around to getting a new one. I sang one measure and the binder fell apart completely and all of my music fell into the accompanist’s lap. The casting director then yelled “OH NO, KEEP SINGING!” and ran to the accompanist and scurried around trying to help him pick up every last music sheet. She told me to keep singing, so I stood there and sang the rest of it a capella. I wasn’t cast.

What is the best thing that someone has ever done for you?
My mother for giving birth to me. Thanks, mom!

In what roles or plays would you like to perform? Would you ever consider directing? If so, what would you direct, and why?
I have a list of top 5 dream roles that change every week. I think right now, those top five are: Deb in Ordinary Days, Marcy in Dogfight, Fiona in Shrek, Lauren in Kinky Boots, and Squeaky in Assassins (this is just musicals…the play dreams go on and on). This list will most likely change in an hour when I remember another dream role I forgot to mention.

I would absolutely love to direct. I direct and choreograph kids sometimes, but right now I don’t trust myself directing adults yet. Some day, definitely. Not right now.

Do you have any upcoming projects or productions? What are you doing post-graduation? What would you like to be doing?
I just got cast in Hair at the Seacoast Repertory Theatre in Portsmouth, NH, which I’m super excited about! After that, we’ll see. Aside from performing, my current post-graduation status is working ALL the time, both teaching and working behind a desk. I think at some point I’d like to run my own theater education program, but we’ll see. I got time.

Do you have anything else that you would like to share with our readers?
If you’re reading this, you are so awesome! Keep reading awesome reviews from MyTheatre!! (They didn’t even tell me to say that, I really mean it!)