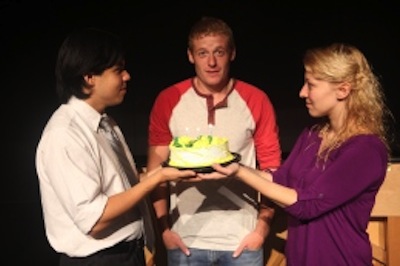 I was honored and blessed to review a senior project a few weekends ago at Brandeis University. tick, tick . . . BOOM! is not an uncommon choice for a senior theatre project or thesis; Jackie Theoharis makes her senior project uncommon by focusing on the character Susan in unique and interesting ways. Aided by My Theatre favorite Jared Walsh, who plays Jon, and the dependable and artistically-versatile Joey DeMita, who directs the project to exceptional success, Theoharis explores her range, both as an actor and as a singer.

Walsh’s opening monologue at his piano is a bit understated and rushed for my tastes, and I wish he had taken more time to develop Jon in this opening conversation with the audience. However, Theoharis brings personality, warmth, and astounding vocals to the opening number “30/90,” which quickly brings Walsh back on-track with the amazing chemistry and soaring vocals for which I first fell in love with him as a performer (he was last seen with Theoharis in the award-winning Spring Awakening with DeMita,). Yes, these three artists have a way of bringing character and story to new levels when they work together, and I can’t wait for future collaborations.

Walsh brings a raw energy and surge to Jon, yearning for inspiration and fame, in both his music and his life. Walsh is at his best when he can narrator and own his show, allowing himself to emphasize moments at his leisure and discretion. Theoharis impresses, however, by bringing the most depth possible to her Susan, Jon’s girlfriend, and normally just one of the principal characters in Jon’s life. Theoharis’ chemistry with Jon is electric, and their “Green Green Dress” perfectly evokes their personalities and relationship, transcending the bubbly lyrics.

One of the best moments is the direction and performance of “Sunday.” DeMita and Theoharis understand the writer and lyricist, Jonathan Larson, and his deep appreciation (bordering on obsession) for Stephen Sondheim. The cast perfectly performs this homage to Sondheim’s “Sunday” from Sunday in the Park with George, producing chuckles from the general audience and glee from theatre aficionados. Yes, Theoharis did her homework when choosing this show as her senior project, orchestrating key moments with DeMita to emphasize her deep understanding of what this show meant to Larson.

While I can’t say much good about Ben Oehlker’s Michael, Oehlker’s duet with Walsh on “No More” (not to be confused with Sondheim’s song of the same name) is Oehlker’s best work. Both men have a giddy energy and excitement that is perfect for the song. I wish, however, that more time was spent developing the friendship between Michael and Jon. While I understand that the focus was on Theoharis as her senior project, I felt like something was missing in Jon’s life. Oehlker rarely rose to the occasion (not helped by an ill-fitting suit and a convincing businessman demeanor).

“Therapy” might have been my favorite number in the show, an odd choice to emphasize in most productions, but perfect for a senior project to feature Theoharis’ natural humor, acting ability, and vocal technique. Theoharis and Walsh work and play off each other with veracity and fun; they have a natural chemistry which cannot be taught or learned. Theoharis dazzles in her multiple roles, playing most notably Rosa, Jon’s agent; Jon’s mother; and the incomparable Karessa, who steals the show with her “Come to Your Senses,” ending with a soaring and sweeping note that nearly brings the audience to its feet.

The production ends on a high note, with Walsh hitting his groove with “Why,” one of the best and heartfelt renditions that I have had the pleasure to hear. The final number offers everything that one could want in musical theatre: energy; story; astounding vocals and harmony; and, most of all, conviction. These actors leave nothing onstage in their “Louder Than Words,” reminding us of Larson’s motto: “No day but today.” With this lesser known Larson work, Theoharis reminds us all what it means to try for (and achieve) your dreams. The fear, obstacles, and tribulations are no match for Walsh and Theoharis’ talent, and I would not expect less from such talented performers. As always, DeMita emphasizes the best and makes the musical run at the perfect length, seamlessly transitioning from the humor to the sadness to the hopeful. I have been waiting for a production that highlights Theoharis’ depth, range, and talent; I am too disappointed that this production ran on such a limited engagement, and I look forward to her future productions, performance, and career.