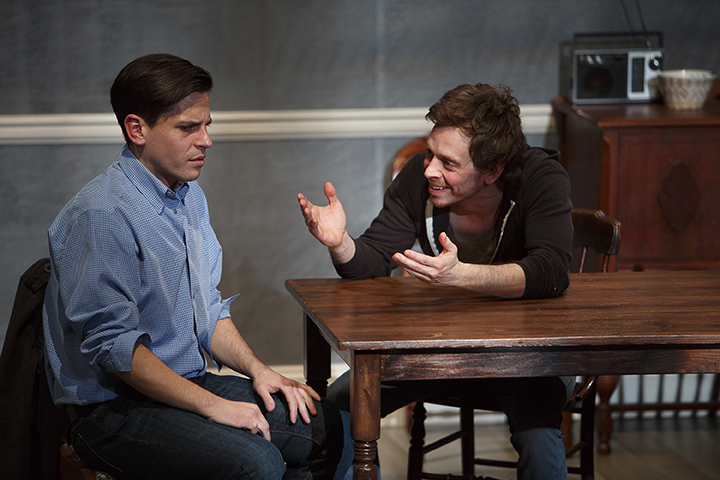 There are two sides to assessing pretty much any contemporary theatre piece- there’s the play, and there’s this production of it. With the current Canadian Stage production of Nina Raine’s Tribes, this line becomes quite blurry.

This is the Canadian premiere of a fairly young and wildly lauded text so one gets the sense that director Daryl Cloran is simply staging a baseline production to introduce Tribes to an audience that has likely never seen it before. Such a situation doesn’t leave a lot of room for directors, designers and actors to make strong choices. Sound designer Richard Feren does an interesting job creating empathizing effects that you can feel vibrating through the floor and Dylan Trowbridge is a captivating mélange of charm, sarcasm, sensitivity, dependency and neurosis as the hyper-verbal Daniel, but nothing else about the production itself seems all that assessable beyond the standard-to-broad performances of Raine’s other hearing characters. I found it particularly hard to form a strong opinion of Stephen Drabicki and Holly Lewis’ mostly signed performances since everything I know about body language and tone is largely irrelevant. If I was to venture an opinion, I would say that I found them both to be engaging if imperfect performers whose frequent slips into exaggeration can be explained away by their characters’ desperation to be understood.

Raine’s text, meanwhile, has been called genius too many times for me to bother arguing (not that I’d be inclined to). I like the pointed verbosity of her hearing characters and the ambiguity of her moral conclusions. The blend of spoken and signed dialogue is clever (though perhaps not as revolutionary as some critics seem to be suggesting) and the subject matter is both poignant and refreshing without being overly self-satisfied. There’s an admirability to Tribes that I think has become the theme of its criticism and I find myself unable to add anything of note to said din of admiration. The CanStage production is merely a showcase for Raine’s text and, save one personally emotional moment when Joseph Ziegler’s stoic father figure shows his disregard by choosing his headphones over a family discussion, said showcase filled me with admiration but not all that much inspiration.