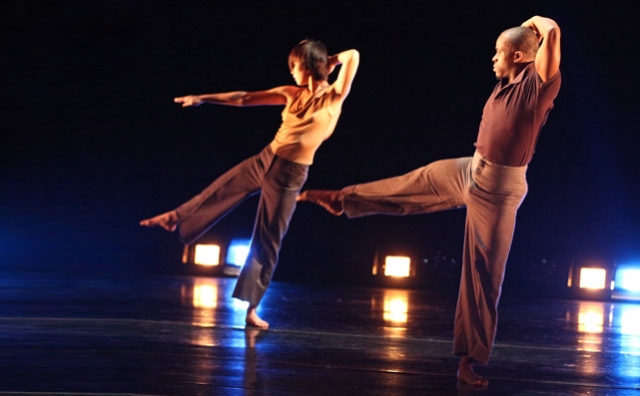 You’ve got to check out The Radio Show. If you don’t have any idea what it’s about and walk into the theatre, you’d see the powerful unity of dance and some really tremendous artists moving their bodies in impressive, interesting and gorgeous ways. Or maybe you’d see the dance as a comparison between the frustration of an urban community, suddenly with no voice and losing the ability to verbally communicate. Maybe you’re a dance aficionado, and the ridiculously talented dancers of “Abraham.In.Motion” will bounce between dance styles in ways that you’ll try to explain to a somewhat befuddled theatre critic sitting next to you. Any way you look at it, Kyle Abraham’s The Radio Show is awesome.

It’s a show based on Pittsburgh in 2010, when Abraham’s father lost his ability to speak and “WAMO, which was the only urban radio station we had in Pittsburgh at the time – that radio station was taken off the air.” Abraham explained that “once that radio station went off the air, there was no outlet for an urban audience;” he added, “and it was tough for somebody who loves music as much as I do.” The Radio Show manages to evocatively represent the singular frustration that is only present when one wants to communicate and can’t. Abraham’s dancers, fluidly sliding across the stage, periodically seize into open-mouthed, frozen, outstretched, wordless manikins.  During one of the gripping numbers performed without music – with flawless grace and timing – we hear Jeremy “Jae” Neal forcing air through his soundless vocal chords. The dancing was profoundly moving.

Abraham was born and raised in Pittsburgh, but learned to dance in New York. His choreography bristled with New York confidence and had an incredible soulfulness and beauty that emanated from the sheer strength of the performers.

But the real success of The Radio Show is its ability to change between styles of dance so smoothly. The narrative of the show was like the needle sliding along the radio dial. Between “stations,” were often long patches of static. In fact, some of the most evocative movement in the show finds pattern in static and rhythm in DJ banter. WAMO, as it is represented in the show, plays an eclectic mix of groovy funk, R&B ballads and pop music from the early 2000s. After WAMO, Abraham told me, “if you want to hear anything that wasn’t hyper pop music, you weren’t going to hear it on the radio.

Notably, Abraham, “who has never had to sit out a show before,” is not dancing at “worldstage;” he injured his ankle while on-tour. Given the personal nature of the show’s subject matter, I was curious to see Neal, an understudy, dance in his place. Neal danced with such strength and expression, it’s hard to imagine that the choreography was designed for anybody else. During the first song of the night, he was light on his feet and danced with precision, soundless happiness and levity. The next number found him tragic, wooden and heavy. He was poised and expressive throughout.

Sarah Cubbage’s costumes were excellent. They exposed the backs of the dancers to showcase the mind-bending strength that is needed to get through even a moment of Abraham’s demanding choreography. The Radio Show moves with the complexity and simultaneity of a Rube Goldberg machine whose final action is to illuminate human emotion for a second. It exposes power structures in romantic relationships and goes straight for the touchy ground of some of hip hop’s more contentious issues with misogyny. Beatrice Capote was a force. In complete command of her movements, she had the capacity to change the entire feeling of a moment with the flick of a shoulder or change in her breathing. Capote and Neal shared several duets which formed the backbone of the choreography and were really quite remarkable. Capote, Connie Schiau and Indigo Ciochetti gave the show its sense of humour and intense passion. They danced opposite Matthew Baker and Chalvar Monteiro who performed well in their own right to balance the ensemble and whose deft, long, moves across the stage came to characterize masculinity and strength. The juxtaposition of their effortless nimbleness with the rigor mortis of the tottering, breathless Capote and Neal is shattering. Catherine Ellis Kirk had an interesting role, drifting in and out less frequently than the other dancers, but always with great presence and with one striking solo.

Abraham.In.Motion is a group of supremely talented young people telling an interesting story. They’re only here for a short while. You know what to do!