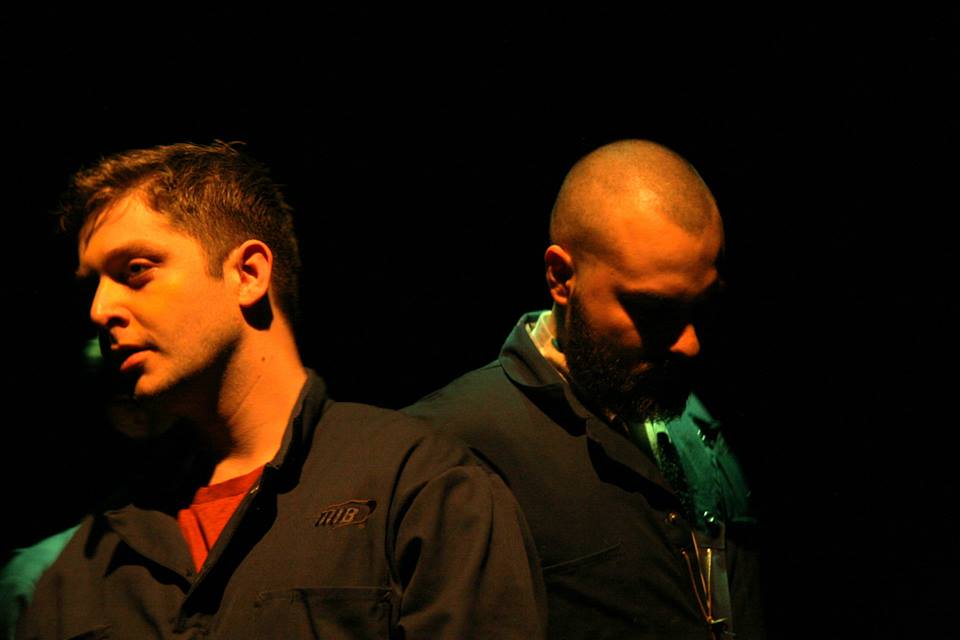 The Coyote Collective presented Labour at the Passe Muraille Backspace last week. The show, written by Eric and Ryan Welch, attempted to represent the monotony, loneliness and despair that can come with the routines of manual labour.

To establish the scene in the warehouse, the collective used repeated physical movements and the sound of a large shift-timing buzzer. Although I understood what they were getting at, the actions weren’t choreographed smoothly together and some of them distracted from the action of the play while I wondered what it was they were trying to show me. How can one labourer move from using a winch to an ten-pound sledge with such rapidity and regularity? What is that task, and why is it in the same place as a dude who folds boxes? The physical set was not very consistent with the content of the play and, though there was interesting thought behind the lighting design that desperately tried to segment the stage into defined parts of the warehouse and the world, it ultimately failed to adequately illuminate the actors’ faces. The resulting aesthetic was dingier and more obscured than must have been intended.

The ideas at play during some of the script’s stronger moments resonated briefly in the space, but they were often overshadowed by the “acerbic,” “dark comedy” that The Coyote Collective hangs their hat on. Unfortunately, many of the more coarse references to women and to societal norms didn’t give the audience a sense of “ok, this is the world of the blue-collar worker.” Instead, it produced a couple of uncomfortable silences. A more nuanced tack would have helped with suspension of disbelief.

I have worked long hours in warehouses, stacking and shifting boxes, punching my colleagues’ timecards when they were late; and as a mover, swearing only when the client was out of earshot. The problem with the presentation of the labour in Labour is that it displays none of the blue-collar sensibilities that truly define work like that. Yes, there are problems with misogyny in those male-dominated workplaces. And yes, there is bullying and swearing. But the real, defining characteristic of that work is that, no matter how weird and profane and angry some of the guys were, there was a real camaraderie built out of the long hours and unreasonable bosses. Labour brushes up against that, through the relationship of Andrew Cromwell’s and Blue Bigwood-Mallin’s characters but never escapes the rigidity that came to characterize the show, perhaps through the frequently-interrupting physical vignettes. Because things became so segmented, actors were forced into stronger-than-necessary decisions that made them seem wooden and dogmatic.

The show did succeed in exposing the fragmented, incomplete feeling that can seep into you, working in a warehouse. The shift whistle would blow, whether at work or not, and disrupt Max Tepper’s character’s thoughts or his attempts at romance with Susannah Mackay’s character. The intrusion of the whistle into Tepper’s life away from work was my favourite device of the Welchs’. Truly, Tepper’s life was regulated by that whistle all the time.

We are teed up to believe that Mackay is a promiscuous, gritty character who occupies a world different from Tepper’s. Beautifully, they find similarities sitting on a park bench, watching the sun set. Tepper describes the end of times and Mackay listens. For a second, there’s real magic between them. We believe that Tepper cares for this woman and it’s lovely to see him open up to that for a moment. This moment was brief. After only a couple of minutes together, they yell at each other and stay, physically apart. Why they didn’t just leave each other then, as strangers in a park, is not clear. The next time we see them together, Tepper is uncomfortably forward. The Welch brothers missed the mark on their connection. The conflict at the end of the first scene feels arbitrary while Tepper’s sexual advances feel uncharacteristic. The play, for all it’s conceptual ambition, falls short of motivating its characters’ action.

Cromwell and Bigwood-Mallin are a frick-and-frack pair tasked with characterizing two exaggerated personalities. Unconvincing struggles at home and with alcohol grow stale quickly, though. Their ham-handed treatment of Tepper never seems to have impetus, but doesn’t seem as casual and aimless as workplace bullying. Unfortunately, their performances occupied a grey zone that left their characters feeling one-dimensional.

Mackay’s performance was the most compelling of the group. Her character was the most interesting, with palpable barriers in front of her, based solely on her appearance. And, although the Welchs make a case that all of the characters are branded with their own kind of loneliness, hers is the feeling that stays with the play most profoundly.

Though The Coyote Collective has their chops and some interesting ideas, Labour needs work before it hits the stage again.