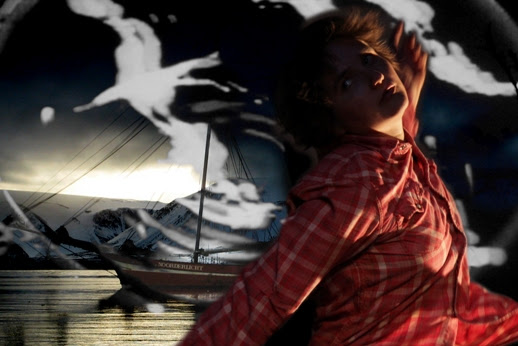 Sitting on the Climate Change Fence

This Clement World is part of the Carbon14: Climate is Culture Exhibition and Festival hosted by the Cape Farewell foundation and The Theatre Centre.

Cynthia Hopkins is a sheer delight whom I have never had the pleasure to see on stage, and it is not surprising to learn that she is a multiple award winning multi-media artist, including the prestigious Alpert Award in Theater and a Guggenheim Fellowship.  Not only is she an excellent storyteller, able to transform seamlessly from on`e character into another while commanding our absolute attention, but her strong movement work made for excellent command of the entire space.  In addition, she played several instruments while singing most beautifully.  Only complaint is that there was not enough of the latter.  I would have enjoyed more of the dialogue had it been sung, allowing us to further relish this enchanting voice.  I imagine this to be a slight departure from earlier pieces of Hopkins’ – dubbed as “musical theatre works” – into increasingly hybridized art forms.  Regardless, the small group of vocalists backing Hopkins was so powerful and eloquent I swore they were an entire show choir.  The seven piece band was equally enjoyable.

The set is simple, yet there are several touches that plunge us into nature, like foliage-covered mic stands, the right amount of turf, and a bamboo fence surrounding a multi-use flat used primarily as an intimate “onstage” entrance/exit.  In the opening scene Hopkins walks behind it with her accordion and suddenly voilà: a projection of her playing the very same instrument she walked away with, but amidst grassy fields signaling summer time.  This spatiotemporal distortion is key throughout the show with projections that mirror the stage action, but in a different time and/or place.  In another instance we spring from audio footage depicting Hopkins’ Arctic journey to first person narration of the characters she encountered, among them the hilarious German professor who has spent the last eight winters there in an icy barren fjord studying CO2 levels.  The flat mentioned above becomes the professor’s small boat, of course.  An instance where projection felt less welcoming were the series of writings produced with a Sharpie on video, expressing the decimation of indigenous peoples’ traditions and culture by European settlers.  While the videos are engaging as ever and surely contain validity, I was left searching for a more tangible link between the sociocultural and sociopolitical chapters of our distant past, and the highly politicized climate crisis of recent decades.  The piece is meant to provoke and inspire hope for the future, but these misplaced videos did not provide me with new insights or tools.

A huge message in the piece is that humans only feel threatened when that threat is immediate; and we are urged about the need to reinvigorate the climate change debate to reveal its immediacy.  The solution that is purported to move us beyond our so-called bliss seems overly simplistic: living simpler lives with fewer things.  If theatre’s primary aim is to awaken our senses and lighten our spirits in the midst of crisis that is one thing.  Perhaps, then, it need not also attempt to offer solutions to large problems unless it is really going to provide the audience with something to take away.  Something visceral is often enough to move me, inspiring me to change some of my actions and, perhaps, conduct some of my own research.  If I feel instructed or alienated, however, I may tune out altogether. I do not think you can afford to play the fence in an eighty-minute show.  Despite eminent research and resources listed in the show’s program regarding rapid climate change, none are thoroughly explored on stage.  I would have liked to see sustainable energy forms, for instance, explored in a creative context.  But most of the scientific content displayed was somewhat of common knowledge.  I couldn’t help but feel like something was missing.

I do think climate change is one of the most important issues of our time, and having had worked for environmental organizations in the past I especially wanted to enjoy this more, but I kept waiting for new facts or ideas.  Is it, maybe, suitable for younger audiences?  I would be interested to see how this show can be developed in the future.