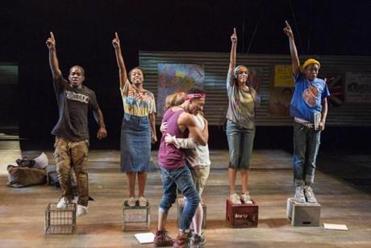 I’m waiting for the next American musical. I’m not sure exactly in which direction it is headed, but I expect a new genre is coming. Witness Uganda at the American Repertory Theatre could be it, but not in its current form. This bright and soulful journey of a musical is brought to life by the immensely talented (and acclaimed) Diane Paulus. With softer strokes and more clarity than I’ve found in her other works, Paulus brings the world of Uganda to life in sharp juxtaposition to our Western culture, especially the busy New York City, the other location for our main characters. Told by actor/playwright Griffin Matthews, Witness Uganda takes the audience into the unfamiliar world of missionary and aid work in Uganda. Matthews wrote the piece with the incredibly versatile composer Matt Gould, as a reflection on Matthews’ real-life experience as an aid worker in Uganda. The artists working on the piece were incredibly well-informed, helped by the unsurpassed resources at Harvard University; frankly, while it was impressive, I would expect nothing less with their kind of endowment. Paulus has a compelling focus for her direction of this new work: “What does it mean to be an American in our increasingly globalized, yet still profoundly unequal world?” While I appreciated this message and I thought that Paulus was incredibly successful at sparking conversation, as noticed in their “Act III” talkback and further conversations after leaving the theatre, the musical itself is rough around the edges, particularly a rather hurried Act II with unclear resolution and poor character development.

The story opens with the starving artist archetype played by Matthews wondering about his success as an actor in New York and questioning about making one of those immense life-changing decisions, like aid work in a third-world country. I admired Matthews’ dialogue, but the conservation always felt like theatre instead of a sincere conversation with the audience; what could have felt like an off-the-cuff cabaret-style opening felt forced and contrived. Fortunately, Paulus is there to swoop onto the scene with a strong artistic vision and the audience is immersed into the beauty and culture of Uganda before our eyes. With simple and limited props and other scenery, aided by video projections, Paulus creates Uganda with help from her brilliant Set Designer Tom Pye, Projection Designer Peter Nigrini, Lighting Designer Maruti Evans, and Sound Designer Jonathan Deans. It’s hard to give accolades to one designer because the technical elements functioned much like a well-oiled machine, smooth and steady with no recognition of its moving parts. Much of the success in captivating Uganda and its culture is due to the vibrant and varied choreography by Darrell Grand Moultrie, and I’m sure assisted by Paulus, an expert at movement.

The characters are mostly well-done, though some more attention to differentiating the Ugandan teenagers would be appreciated. Kristolyn Lloyd’s Grace leads the pack as the most colorful and interesting to watch; even the way she slurps on the rare treat of a soda is a joy to watch. Nicolette Robinson’s sincere Eden is heartbreaking to watch, though I found her a bit one-dimensional at times. Jamar Williams’ Ibrahim and Tyrone Davis, Jr.’s Ronny are great as a pair, but lose spunk when identified individually. Indeed, the quarter thrive on their chemistry and relationships as a unit, existing with a solid dynamic among them. The more impressive acting talent comes from the misunderstood Joy (played with layers of complexity and nuance by Adeola Role) and her brother Jacob (played with equal intensity by Michael Luwoye). These two characters provide the necessary questions, but never the answers, to Paulus’ questions about globalization. While in Uganda, Matthews realizes that what he thought was a helpful aid trip is really a front, a scam, a lie, and it’s this realization that sparks the drama in this poignant musical.

However, some of the conflict is hard to follow. Without ever showing the true villain behind the curtain, Matthews must talk about (and fight!) this named opponent without ever confronting him. I admit to being conflicted about the decision to never show this antagonist. Additionally, while the end of Act I provided a stunning and overwhelming finale, Act II opened on an oddly satirical note (literally) with one of their weaker songs, both musically and thematically. From there, Act II quickly descended onto the manic, with rapid transitions from NYC to Uganda and back to NYC. I felt as frantic as Matthews in trying to keep up with it all. But then there was Ryan. Ryan is Matthews’ best friend, a plucky, artistic, immensely passionate, crazy rational, singer/songwriter/guitarist with enough personality to supply her own running sitcom, played with the touching truthfulness and warmth by Emma Hunton. Whenever Matthews would get a little too crazy or the book would vary a little too much into the preachy, Hunton’s Ryan would swoop onto the scene to save the day, much like her unexpected journey to join Matthews in Uganda.  Honestly, I wondered why the introduction of such a random filler character while Ryan and Griffins talked in his apartment as he packed for Uganda; I thought that the playwright had made a silly choice to introduce a character merely to feed something to the struggling leading man while in NYC. Boy, was I wrong. With clever touches to her character, Hunton steals her scenes with her positive, energetic, and earnest performance, combined with some belt. But please, can we re-write her solo? It’s in a cliché place, it doesn’t showcase Hunton nearly enough, and it just seems odd for a struggling singer/songwriter/guitar performer to feature herself on such a song.

While I can’t say that I loved Witness Uganda, ART puts on a hell of a show, as featured by the tremendously talented ensemble and supporting stars. The next step, if there is one, is for Matthews and Gould to do a heavy re-write of Act II (and Ryan’s song), along with finding a different actor to play Matthews. I know that’s awful to say that Matthews can’t play the part that he loved, but I just didn’t care for his campy mannerisms and his voice; neither were bad but both were far weaker than the rest of the cast and were quite noticeable to even the untrained ear and eye. Needless to say, such a new production is an exciting addition to our Boston theatre scene and Paulus does another tremendous job leading the industry with her innovative and intelligent artistry, complemented by the award-worthy team of designers. Don’t miss this new treat performing at the American Repertory Theater now until March 16, 2014. For more information, see www.americanrepertorytheater.org.