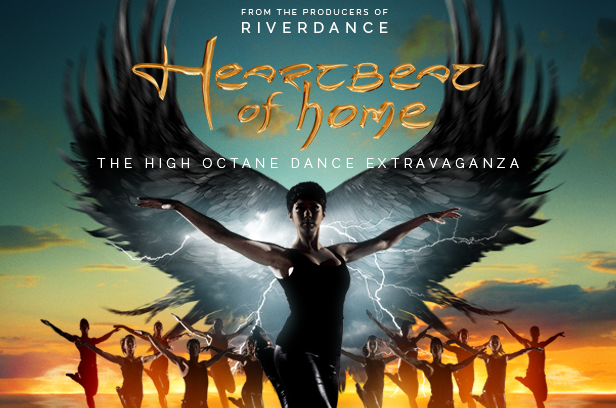 Beat the Winter Blues with Heartbeat of Home

I am constantly in awe of the physical and mental stamina required of dancers, and have always said that if I could go back in time I would make sure to pursue dance.  Well this show made me want to die immediately and be reborn a dancer.  Heartbeat of Home is a spectacle with all the right elements – figuratively and literally: the first act is a fusion of air and water while the second act focalizes earth and fire.  Alan Farquharson’s set and David Torpey’s projection design consists of three projection screens with uniquely shaped concave edges.  In Act One it’s as if waves engulf the dancers as they pursue their dreams, becoming ever so distant from their past lives.  In Act Two the immigrants have long begun to make new lives for themselves as pods of fire spark our attention on screen as much they elevate the powerful moves and fiery beats.  Unlike anything I have ever seen, the never-ending series of dance numbers and beautiful stage pictures encompass Irish, Afro-Cuban and Latin dance styles.  In fact, it is this union of genres that make it a show that will have everyone from grandma to aspiring artist thumping.

In the opening numbers we witness the tremendous courage associated with leaving “home” only to have to rebuild it in a new strange place.  The initial stage pictures adequately constructed mostly with pairs slowly evolve into vignettes that are a fusion of people and stories.  In one of the most memorable scenes modelled after the iconic 1930s photo, Lunch Atop a Skyscraper, depicting workers sitting on a girder during the construction of Rockefeller Centre, male dancers dangerously compete against one another showing off their best hardshoe moves.  Fred Nguyen is made out to be the timid one of the bunch who lacks confidence and skill, until he blossoms.  He plays the character so well that you question how amateur he might actually be.  In reality, he is an accomplished performer and as the most expressive of the supporting dancers in the Irish dance troupe, one you keep searching for throughout the show.  The urban scene quickly begins to resemble West Side Story, but on steroids.  The various dance styles coming together are a metaphor for a greater number of cultures creating a new community in the land of “freedom.”  The production, it’s clear, gets its name for that “heartbeat” that is the common denominator amongst men and women, no matter where they end up.   It’s sad to think of the past, but the future is exciting too.  “On this journey you haunt my every dream … My love… My life… Haunt my dreams” proclaims the stunning vocalist (Lucia Evans) who makes sporadic appearances throughout the show.

Lead Irish dancers Bobby Hodges and Ciara Sexton manage to really get the crowd going throughout with their excellent command of the entire playing space.  To add, Teneisha Bonner’s skill and fluidity allow her to reach out well beyond the stage with her hip-hop techniques that magically manifest into every genre.  And not failing to impress with their Latin dance moves so sexy they almost feel mind altering are the stunningly glamorous Claire Craze and insanely handsome Angelo Gioffré.

Skillfully complimenting the dancing is the excellent musicianship.  The collective spirit amongst all cast members – dancers and musicians – is unrivalled.  In a high-spirited scene Robbie Harris takes centre stage as master of the dynamic bodhrán drum using it to competitively, yet playfully conjure up Hodges’ expressive bodily spirit.  Robbie Fitzgerald on guitar is, also, notably present at all times no matter how dynamic the stage action surrounding the orchestra.  In truly celebratory “street party” style, both present and future are illuminated as the circle of dancers opens up to, simultaneously, honour the memory of the past.  And on top of it all, following the overwhelmingly positive standing ovation, of course, the musicians playfully attempt a go at dancing themselves.

Heartbeat of Home plays until March 2nd at the Ed Mirvish Theatre.