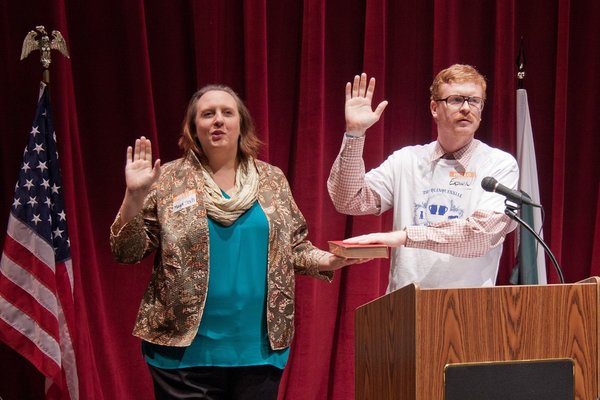 Beertown: Where Everybody Knows Your Name

Beertown. I know what you are thinking. It’s either a magical land or the name you gave the part of the restaurant that you “annexed” last Thursday night during Happy Hour after you finished a beer tower all by yourself. You are absolutely right (about the magic – I saw nothing last Thursday, I promise). Presented by dog & pony dc at 59E59 Theatres, Beertown is part choose-your-own adventure, part town hall meeting, and part ode to small town America tucked away in the sprawling landscape between the coasts. In its totality, it is a unique, innovative, and engaging theatrical experience that challenges audiences with a rich discussion of community and identity.

Beertown is about the 20th Quinquennial Time Capsule Celebration held in the small town of Beertown. During the celebration, the town’s time capsule is dug up and the entire town is invited to vote on which items will be removed from the capsule and what new proposed items will be added to the capsule. Beertown is not a play for the tentative – audience members are Beertonians for the day (to remove all doubt, everyone gets a Quinquennial t-shirt and a “Hello, My Name Is” sticker to wear upon entering the theatre). Cast members chat with the audience during a dessert potluck at the beginning of the show. No, you read that correctly. Audience members are invited to bring a dessert to share before the show (and they do, so feel free to try your hand at re-creating a Cronut® if you feel so inclined)! The show is run like a town hall meeting. During the meeting, the mayor and various other community leaders take the audience through the Pledge of Allegiance, roll call, and Beertown Hymn (in addition to acting neighborly, audience members are also expected to sing . . . poorly, in my case). After the formalities are over, they guide the audience through the presentation of the time capsule artifacts and artifact proposal, the debate over the items that should be included in the time capsule, and the voting on the items for inclusion.

The play is not entirely interactive. There are more traditional theatrical segments throughout the show where the actors perform short scenes for the audience. During these scenes, the actors explore the history of Beertown and introduce some of the complexities of small town identity and community. These breaks in the action, or “Antecedents” as they are called during the show, and the elaborate histories crafted around the time capsule artifacts are the heart and soul of Beertown – without them the audience would merely be role-playing for two hours with little or no intellectual challenge. Don’t get me wrong. I suspect that such a play would still be uproarious and fun. But it would lack depth. Under the direction of Rachel Grossman, Beertown artfully integrates the struggles and concerns of small communities into a comedic play and also challenges audiences to consider what shapes personal and social identity.

Inspired in part by Sherwood Anderson’s book Winesburg, OH, Beertown could be any small town found in the Midwest or plain states – a town with a volunteer fire department recently forced to close due to budget constraints. A town that rallies together in the face of national disaster to raise money despite a locally depressed economy. A town where a local woman is known for baking and delivering a family recipe that has been passed down through the generations whenever someone is mourning or celebrating. A town where being in the newspaper and sharing local news is a big deal. A town where people actually show up to town meetings and discuss history. I have a confession. Like many New Yorkers, I am not a New Yorker but, rather, a recent transplant from Boston . . . whose roots are actually in the tiny, two-traffic light community of Union, Ohio. The creative minds behind Beertown garnered major respect from this small town girl for their thoughtful treatment of middle America. The Beertonians are intelligent, fleshed-out, and multidimensional characters with conflicting opinions and points of view. They are people. Not caricatures.

Beertown is truly an ensemble effort, and the cast of Beertown successfully employs a blend of improv comedy and scripted material to create Beertown. Despite the heavy reliance on audience participation, the actors keep the show moving and there is not a weak member in this ensemble. Pulling double duty, Director Rachel Grossman stole the show with her hilarious performance as young MJ Soch – daughter of the town mayor and Youngest Daughter of the Ninkasi, (it’s a civic membership society, which you can read all about on Beertown’s fake website). Grossman’s comedic timing as the painfully shy and awkward MJ was impeccable. J. Argyl Plath also garnered laughs every time he spoke as Beertown’s Ombudsman. Tasked with portraying the character with the undesirable duty of making sure the proceedings abided by applicable procedure, Plath had some of the best ad-libbed lines of the show after one audience member left during voting.

Also notable was the performance by Colin Hovde as newspaper writer Arthur Whiting. Hovde’s Whiting is soft-spoken and not particularly attention-grabbing. Whiting’s job to write about his neighbors – not to draw attention to himself. During the show I saw, we voted to remove an item contributed by Whiting that once belonged to Whiting’s mentor. During debate, I watched Hovde’s reactions to the discussion and listened to him make the case for the item. In short – I watched him fall apart. I do not think most of the audience saw this because they were focused on the debate. But I was watching Hovde, and he handled the emotional aspect of the situation brilliantly.

The only problem with Beertown is, at times, the complexity of the history surrounding the town. For example, one item up for inclusion in the time capsule is a gun. Despite the show including a musical number and several other attempts to explain the gun’s importance in town history, I admit that its background was still unclear to me until I approached a cast member during our intermission “dessert break” and asked them to explain it. After the show, we were given programs with full timelines outlining the history of Beertown and directing us to the website, which was great but not particularly helpful for the show. Ultimately, this flaw in the script is inconsequential because understanding the play has very little to do with how you vote or even the minute details of Beertown’s history.

Next weekend I will be returning to my high school for the first time in nine years to attend an event honoring my Drama Club teacher who is retiring after 31 years of teaching young people in Southern Ohio to appreciate the arts. It was, in part, the two hours that I spent in the charming company of the Beertonians that convinced me to book my plane ticket home. Because, despite how far away you may travel, once you become part of a community, whether you leave your mark in the form of some tangible artifact or merely on the collective memory of a few people, you remain part of that community until that mark completely fades. In small communities, those marks last for generations.

Beertown will be performed at the 59E59 Theatre until February 16.