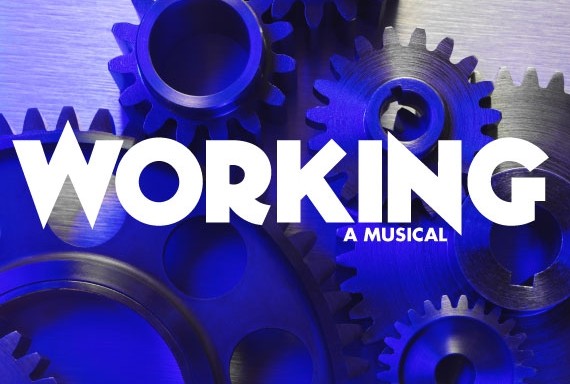 The Lyric’s Working is a Simple Job with Much Profit

The Lyric Stage Company’s production of Working did not make my “Must See – January.” That was my mistake. I omitted it from the list because: a) none of the actors jumped out at me by name (though Ilyse Robbins, the director, certainly did – See 2013 My Theatre Award Nominees: Boston); b) the musical is an odd duck with its vignettes and small cast playing many different characters; c) it’s rarely acknowledged as the best work of composer Stephen Schwartz (famous for Wicked but also Pippin and Godspell, not for Working). Yet, The Lyric Stage Company of Boston surprises yet again with its breath of fresh air into this rarely-produced gem.

Robbins should be given the largest credit for her innovative use of space and movement to tell this compelling and timely work. Working was originally written as a collaboration in 1978, featuring music and lyrics by Schwartz and a number of other songwriters. Based on the book Working: People Talk About What They Do All Day and How They Feel About What They Do (1974), Working chronicles the struggles, hopes, humor, and joy of people what they do for most of their days and lives: work. From Studs Terkel’s interviews with people from different backgrounds and occupations comes the poignant tales of teacher, fireman, executive, factory worker, housewife. Within each of these characters, the actors find a beating heart of truth and honesty. The performances are a mixed bag for me in terms of talent, but that didn’t matter to me. Each actor brings so much raw commitment to each of their characters that I was drawn into their storytelling and quickly forgot that they were playing a role. These actors embodied the mannerisms of a dramatic waitress, an excited businessman, and the lowly newly-hired. For me, these connections transcended the mere theatrical experience and hit home as a noteworthy performance. Robbins does an excellent job of coaching, guiding, and directing her cast and designers to superb success in telling multiple stories about what it means to work in the United States today. I connected with these stories, despite difference in age, background, race, gender, and education. Robbins infuses her production with her vibrant and clever choreography for which I fell in love with her in On the Town. Her choreography and movement fit her actors and their characters perfectly, never extending them to make the choreography look anything but fun and purposeful. Robbins, a choreographer and dancer by trade, allows her  talents to shine without overpowering her cast’s work in telling their characters’ stories.

The set design by Anne Sherer exceeds expectations with its fluidity and purpose. Robbins and her cast use every inch of the space with enormous success, feet dangling off platforms, swinging from support beams, and parading around with a moveable ladder. The set embodies multiple locations, while maintaining a simple construction and minimalist feel. The action jumps from a construction site to a factory to a fourteen wheeler to an executive office with ease because of the strong set design and the actors’ commitment to creating each space anew. As always, the Lyric boasts some of the best lighting design in town; John Malinowski highlights each scene and moment with beautiful colors. If you get a chance before or after the performance, look above you; you will see the hard work of the Lyric Stage and Malinowski in designing, lighting, and coloring this beautiful production. That hard work does not go unnoticed by me.

The award-worthy costume design by Rafael Jaen worked seamlessly for the actors to transition from each character, many of these changes occurring before the audience’s eyes onstage. The collaboration among the cast to make these costume changes was very impressive, and reinforced the unspoken workers in the play, the actors. Yes, from the beginning, we are reminded that we are watching a musical with an unseen Stage Manager calling the first actor to places. With each transition, you are reminded that an actor is working hard to tell you the story of another worker, and this actor is doing the job without thanks, without acknowledgement. I am a firm believer that the obligatory curtain call is a “Thank You” to the audience, not a diva moment for an actor to shine; this cast allowed me to remember the extent of an actor’s work and the acknowledgement that they deserve.

You see, these actors tell stories with such ease and warmth. You can tell that each of the characters’ stories resonates with the actor playing each role. None of the actors play the pity party and instead, true to the work, they find the cause to celebrate even the most “ordinary” lives. As I mentioned, few of these performers had the name (or even talent) to resonate with me. However, perhaps most importantly, the whole was greater than the sum of the parts. Like the individuals who work on a job, it became less about each individual moment and more about the success of the project; for that, Working paid in spades. And that’s not to say that there weren’t stunningly beautiful and captivating (and entertaining) moments. For instance, Tiffany Chen (as Woman 1) surprises and delights in her multiple roles; she is smart, nuanced, and sings beautifully, a marked improvement from her performance in the earlier One Man, Two Guv’nors. She dazzles in her supporting ensemble numbers and captivates in her solos. This is one performer who is back on my radar.

Merle Perkins (as Woman 2) delivers a soulful and engrossing turn as a cleaning woman, supplied with the energy by Chen and Shannon Lee Jones (as Woman 3). Jones provides some of the most outlandish and stunning work as a waitress, turning with flourish and providing some much-needed company late into the production. Phil Tayler (as Man 1) is one of the strongest actors of the group, and his trucker mixes just the right amount of blue-collar without disrespect or cliché. Cheeyang Ng’s Man 2 provides some of the strongest vocals, particularly in his upper register, but I didn’t care for many of his characters (with the noted exception of his ability to handle some tough off-color humor with ease when talking about shooting his boss; seriously, kudos for finding a way to save that character from extreme awkwardness in the face of our recent tragedies). Christopher Chew delivers a soulful “Fathers and Sons” and a compelling delivery of his executive, but he’s remarkably forgettable within his other roles. Indeed, this production benefited less from “star” names because I think I would expect more; instead, the rising stars like Chen and Tayler provided the necessary commitment to each of their roles. You won’t walk out of the Lyric humming any of Schwartz’s (and company) tunes, but hopefully you’ll walk out with a full heart and a smile on your face. Robbins and her cast and designers’ ability to transcend Working’s limitations as a musical to create a memorable ensemble and captivating 100 minute performance deserves accolades and attendance.

The Lyric Stage Company continues to impress me. They are just halfway through their 40th Season, and, dare I say, their best work is yet to come. Next, you can see the classic play that needs no introduction, Death of a Salesman, directed by My Theatre-favorite Spiro  Veloudos, and starring another My Theatre-favorite Paula Plum as Linda Loman. Look for an upcoming interview with Spiro Veloudos for his outstanding work last season with On The Town and 33 Variations, part of My Theatre’s 2013 Nominee Interview Series. It’s clear, however, that Ilyse Robbins has earned her right to call herself both a noteworthy (and no ordinary) director and choreographer for Boston’s stage. I expect wonderful things from her in the future; don’t miss your chance to see her work “work” its magic across the Lyric Stage in Working, running until February 1, 2014 in Boston.