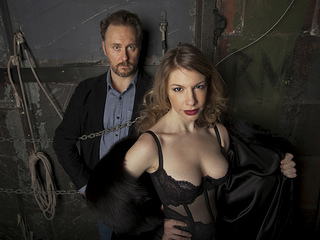 A chilly month awaits us for January. Honestly, there’s not much on my list for this month, but I think many theatres needed the break for the holiday and we will see a surge of productions for February and March. That said, we have some real gems for which I expect record-breaking attendance. From a sexy new work from a classic comedic playwright, an adaptation of a popular novel and movie, to a Boston original, and a fun new panto, we have unexpected diversity in my “Must See – January.” As always, let us know what you think!

My “Must See” List for January in Boston includes:

Huntington Theatre Company
Venus in Fur, by David Ives, directed by Daniel Goldstein
Jan. 3 – Feb. 2, 2014
This sexy play by the clever David Ives takes its proper place at the Huntington Theatre Company. Few companies would be able to take such an intimate work and make it into such a thrilling and fun production like the Huntington. For a sneak peek into the thrills that await us this month, check out their trailer for the production. Certain to surprise, always to excite, Venus in Fur should heat up our chilly January. Will you be brave enough to venture into the bed, ahem, theatre?

Speakeasy Stage Company
The Color Purple, book by Marsha Norman, music & lyrics by Brenda Russell, Allee Willis and Stephen Bray, directed by Paul Daigneault
Jan. 10 – Feb. 8, 2014
This rarely-produced work graces the SpeakEasy Stage Company this month with soaring ballads and gorgeous moments. I am quite excited to see this acclaimed novel and movie hit one of this reviewer’s favorite stages. Directed by a My Theatre favorite, this epic tale should be both personal and heartfelt. The musical tells the story of one woman’s journey through pain, loss, and love towards healing and joy. If you need any more inspiration, let’s not forget about Fantasia’s impressive performance at the Tony Awards a few years ago with “I’m Here”.

Argos Productions
The Haberdasher!, by Walt McGough, directed by Brett Marks
Boston Playwrights’ Theatre, 949 Commonwealth Ave., Boston
Jan. 10 – 25, 2014
I have not reviewed anything with Argos Productions. Yet. This month, the ingenious Brett Marks (of IDS’s Glengarry Glen Ross fame) takes “unflappable Huntington Playwriting Fellow” Walt McGough’s newest play to the stage for some clever fun. With a cast of just four actors to portray a whole kingdom, and cross-dressing and sword-buckling fun, how could I say no? It’s an odd month when I find a clever original to spark my interest and with this talented cast and crew at the helm, I doubt I’ll be disappointed.

imaginary beasts
Rumpelstiltskin: Or All That Glitters, conceived and directed by Matthew Woods
Boston Center for the Arts, Plaza Black Box Theatre
Jan. 11 – Feb. 1, 2014
A truly topsy-turvy tale awaits as imaginary beasts is back with this newest take on a classic fairy tale. We rarely see pantos in the United States (partly because they require a keen sense of acting and directing, partly because of the humor involved), but it’s always a good time for both adults and children to see such works by an educated cast and crew. imaginary beasts and particularly Matthew Woods have impressed before. Do they have the magic again, or has their spindle returned to spinning just straw?