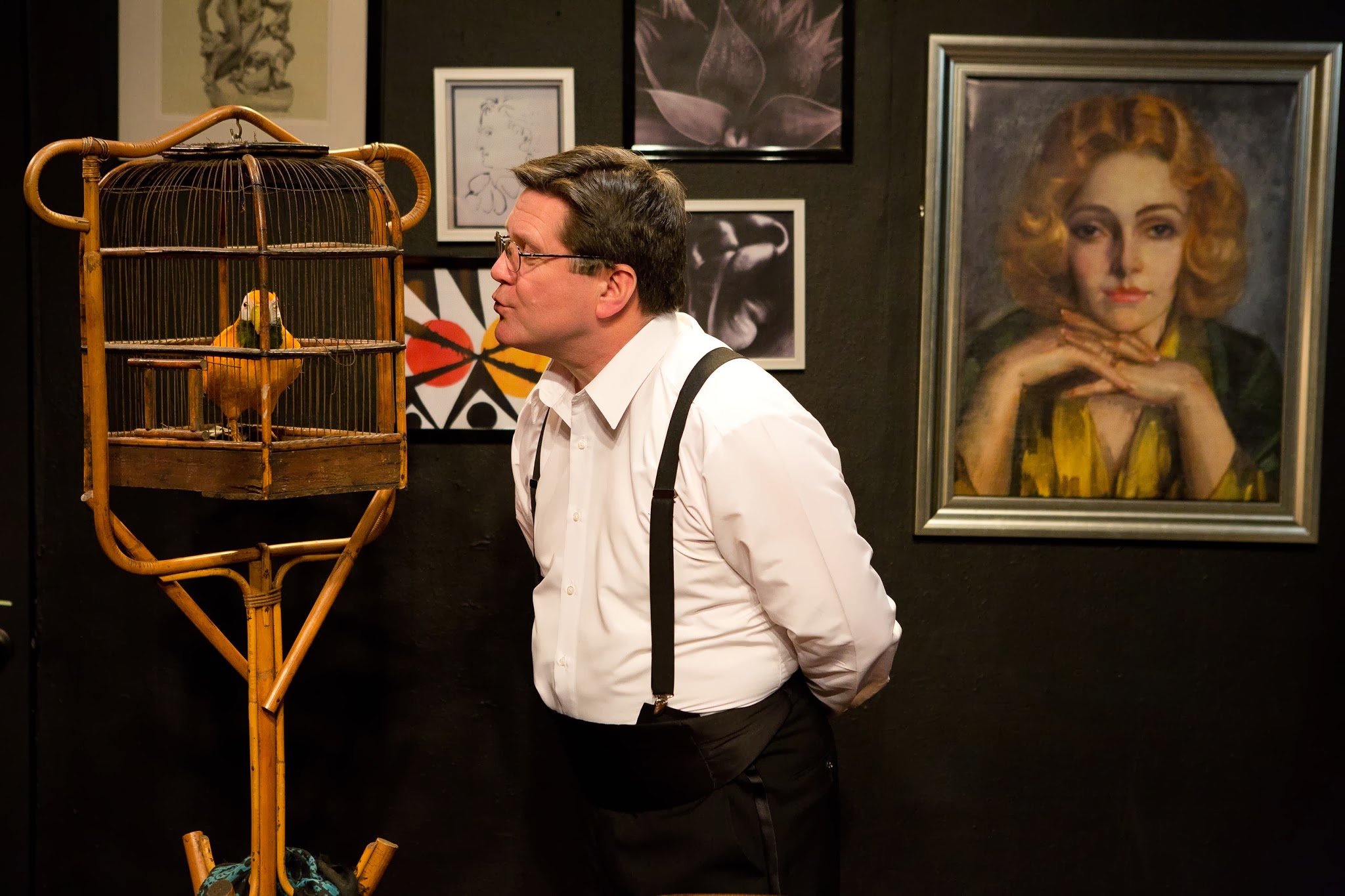 “Never start a story with a description of the weather. Nor end it with a marriage. The critics will kill you.” J.B. Heaps does neither in his compelling new one-act comedy Private Disclosures. There is a great deal of truth to that quote uttered by Preston Sherwood in Heaps’ play – the best plays are often those that are both complex and emotionally charged, because who wants to watch a cliché unfold on stage? Heaps not only succeeded in creating an incredibly complicated and layered protagonist in Preston Sherwood, his play is both humorous and well-paced, with several surprises and intriguing characters.

Set in the 1960’s and on the evening of Preston Sherwood’s 40th birthday party, the play opens as Preston sits at home, an apparently lonely man with no one but a foul-mouthed parrot (aptly named Oedipus) and a large painting of his dead mother (I said “aptly”) for company. Preston is a gossip columnist who spends his days pecking away at a typewriter with a martini, allegedly working on a novel exposé detailing the sordid affairs of the Park Avenue elite. Despite his cheerful demeanor, it becomes increasingly clear from Preston’s telephone conversations and conversations with his personal assistant that he has spun a web of lies around his life, convincing others, and perhaps even himself to a degree, that he has achieved a level of success that he has yet to achieve. He spends his time avoiding calls from creditors while simultaneously rejecting calls from people who could advance his interests (the mysterious reason for his disdain for these individuals is masterfully revealed at the end of the play). His previously published book sits stacked in his home – an apparent flop. He exaggerates the monetary advance that he received for his new novel, he exaggerates the work that has been done on his new novel, and he degrades the people with whom he interacts. One cannot help but wonder – who could possibly be coming to his birthday party?

It is immensely easy to despise Preston until the motivations behind his behavior are introduced and his humanity is revealed. Darkly comedic, Heaps’ play is not without tragic moments as everything that Preston holds most dear is taken from him. Through two characters – a young girl who calls to interview Preston for her school newspaper (the epitome of innocence and aspiration) and a sinister voice on the phone who threatens Preston on behalf of rich clients who want to prevent Preston’s new novel from ever hitting the shelves (the epitome of brutality and power) – Preston’s illusions about his life are destroyed. However, it is that same young voice of innocence and aspiration that reinvigorates Preston and inspires him to write what may become his greatest creative work.

Heaps’ play is one of the best off off-Broadway productions that I have seen in the past few months. My only issue with the plot was the second appearance of the mysterious threatening stranger. After returning from his birthday party to find his apartment ransacked, Preston is telephoned by the strange man who once again threatens Preston and humbly suggests that he not publish his novel – if it actually exists. The encounter feels unnecessarily repetitive and overlong given the man’s prior call with Preston. It is the only point in the play that drags a bit and does not seem to forward the plot or character development in any meaningful way.

The Bridge Theatre is an intimate space (an intimate space that was transformed into a lovely set, by the way), and the three-member cast of Einar Gunn, Robert K. Benson and Jamie Heinlein did a marvelous job of filling the stage with a colorful array of characters from aristocrats to handymen. Einar Gunn’s performance as Preston was particularly noteworthy – Preston morphs from a detestable and deceitful human being into an introspective and wounded individual flawlessly, and Gunn’s emotional breakdown after he discovers that some important possessions have been destroyed is heart-wrenching to watch. Also notable was Benson in his numerous roles – each as entertaining as the last. Stealthily shifting between accents and clothes, Benson was always a welcome presence on stage, and he is an incredibly entertaining actor.

I have to admit, there is something about the endless deluge of private pictures, half-truths, and lies about the rich and famous plastered across print and social media that I find incredibly puzzling and sometimes disturbing; therefore I was pre-disposed to detest Preston Sherwood and his tabloid journalism. However, J.B Heaps’ protagonist is far too complex to be branded or judged so rashly, and Private Disclosures is ultimately an entertaining and well-crafted tale of self-discovery.

Private Disclosures runs until February 2 at The Bridge Theatre at Shetler Studios.