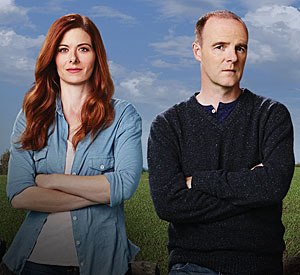 There was unmistakable and exasperated scream on the other end of the phone. “What?! Are you serious? How is that possible?” You would have thought that I had told my mother that I was pregnant with quintuplets. But no. That was my mother’s reaction when I let slip that I have never seen the movie Moonstruck. My guess is that there are many 27-year-olds who share my cinematic-viewing gap when it comes to Moonstruck, but I am one of only two 27-year olds who share my mother, and my mother LOVES Moonstruck. In fact, it is her love of John Patrick Shanley’s Moonstruck that led me to go see Shanley’s newest play, Outside Mullingar, starring Brian F. O’Byrne and Debra Messing, at the Samuel J. Friedman Theatre. Shanley is a well-known stage and screenwriter, and he is perhaps most acclaimed for his extraordinary play Doubt for which he received both a Tony Award and a Pulitzer Prize. Oh yes, and Moonstruck.

Having lived in Galway, Ireland for five glorious (if not drenching) months, I appreciated the apparently chilly, small farmhouses and fence-enclosed fields that served as the backdrop for Outside Mullingar. Outside Mullingar is the story of two families, the Reillys and the Muldoons, who for many years have owned adjoining farmland in the Midlands region of Ireland. The play opens after the death of the patriarch of the Muldoon family and explores the complicated relationship between middle-aged Rosemary Muldoon (Messing) and Anthony Reilly (O’Byrne). Both talk a big talk of escaping their mundane and lonely farm lives, but it becomes clear that neither is really all that interested in moving away (although neither is all that happy with the status quo either). The reason for Rosemary’s hesitation is obvious – although she hides behind a cloak of hatred for Anthony stemming from a childhood slight, she is in love with him despite his obtuse unawareness of her affection. When Anthony’s father wants to sell the farm out from under his son, it is Rosemary’s refusal to sell her small plot of land that foils his plan. Effectively preventing Anthony’s neighborly escape, I might add. Anthony’s attachment to the land and to Rosemary is more complicated and, ultimately, quite an odd plot-twist worthy of a work written by Shanley.

As the romantic tension builds between Rosemary and Anthony, who have effectively waited half their lives just to start their lives, their parents, Tony Reilly and Aoife Muldoon, are preparing for the end of their lives. Which apparently includes judging and influencing their children as much as possible before they go. Tony, played by the charming and hilarious Peter Maloney, is particularly opinionated. Full of Irish witticisms and fiercely proud of his own pedigree, Tony is the sort of man who openly claims to love his land because he is an Irish farmer and that is what Irish farmers do. Strangely enough, while he loves his son, he is not particularly fond of sharing these feelings openly (at least not at first). However, he has no problem telling everyone his son’s faults. In a play chock full of characters in need of personal growth, Tony arguably has the greatest gains to make in the shortest time.

Unfortunately, despite having only four characters, Shanley’s one-act play fails to develop fully satisfying relationships between the characters, including between Anthony and his father. I genuinely appreciate a well-written one-act play. Too often a play suffers because it is overlong. However, this is the first one-act play that I have seen that left me wanting more. In fairness, I attended a Preview performance of Outside Mullingar; however, the show that I saw felt unfinished and the plot shifted too quickly at times. With such a talented cast of actors, this pitfall in the source material was disappointing.

The casting in Outside Mullingar is superb. O’Byrne may have come by his Irish brogue naturally but his strong-willed, yet uneasy character Anthony is far too complex to have come naturally to O’Byrne. Anthony is genuine, introspective, and he appears have a good head and heart. He is an unlikely protagonist and an unlikely love interest, especially when his insecurities begin to surface, but O’Byrne makes it easy to care about Anthony and even root for Anthony in both those roles despite his . . . let’s call them peculiarities. It’s not an easy role, but O’Byrne performs admirably. O’Byrne also has a pleasant on-stage rapport with co-star Debra Messing who, in her Broadway debut, makes a pretty convincing Irish woman. Unlike O’Byrne, Messing did not inherit her Irish accent by birth, and I appreciate that she did not adopt on an overly thick fake accent as so many actors (yes, even seasoned stage and screen actors) tend to do when faced with the daunting task of speaking in a non-native tongue. Messing is one of my favorite comedic actresses because she excels at physical comedy. Don’t believe me? Watch a few of episodes of Will & Grace. She has an amazing ability to draw laughs with an exaggerated gesture and a facial expression (so much so that she reminds me of Lucille Ball at times). From a comedy prospective, she did not disappoint in Outside Mullingar. I also found Messing’s Rosemary incredibly compelling – although both depressed and lonely, she is an outspoken and self-reliant woman who tackles the care and maintenance of an entire farm by herself as a sort of “screw you” to the world as she waits for the one man whom she loves to come to his senses. Messing’s Rosemary has chutzpah, and I like that! In addition to O’Byrne and Messing, both Peter Maloney and Dearbhla Molloy are truly lovely supporting actors and perfectly cast in their respective roles.

Although not as well crafted as some of his other work, Shanley’s Outside Mullingar was an enjoyable, albeit slightly dark, romantic comedy with a remarkably talented cast and a charming Irish setting – a perfect play to kick off the 2014 Broadway season. Oh yes, and I still have not seen Moonstruck. Let’s keep that between us – I’d hate for my mother to find out.