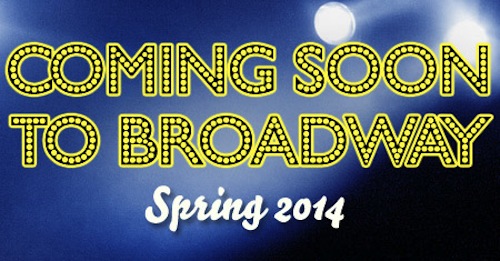 An arctic blast has overtaken New York, and as per usual with the seasonal change, many of the shows that opened in the fall have permanently turned off their marquee lights (as have a few longer running shows – farewell, Spiderman).  But, I have a not so secret “secret” to share with you.  As New Year’s Eve revelers turn in their paper crowns for plane tickets, New Yorkers and the occasional tourist willing to brave the cold will enjoy rock bottom theatre prices and fewer crowds around the Great White Way.  Moreover, with Tony Award season just around the corner, many new shows will be in previews January through March, and the 2014 Broadway season is shaping up to be an intriguing one!

Shows that open before April 29 in a Broadway theatre are Tony Award-eligible, and, while the fall season was chock-full of brilliant plays, there are a few musicals hitting the stage in 2014 that are garnering a great deal of attention. Shows of interest include:

Outside Mullingar (previews begin Jan. 3; opens on Jan. 23) – Debra Messing of Will and Grace fame makes her Broadway debut alongside Tony Award winner Brían F. O’Byrne in a romantic comedy self-described as an “Irish Moonstruck.” Hopefully, it will be as quotable!

All the Way (Feb. 10; March 6) – Okay, so the Breaking Bad obsession may have driven Lauren Webb a tad crazy. While I have not seen a single episode of the award winning series, I understand that the hype is warranted, in large part, due to Bryan Cranston’s performance as Walter White. After finishing Breaking Bad, Cranston began working on the American Repertory Theatre’s production of All the Way, which tells the story of President Lyndon B. Johnson’s first year in office. Cranston received largely positive reviews for his portrayal of President Johnson and is now making the move to Broadway. Time will tell if Walter White fans will pay Broadway prices to see a dramatic political tale; however, as a political science and history buff, I am looking forward to seeing this production and getting my first look at what Cranston can do.

Aladdin (Feb. 26; March 20) – Disney continues its Mickey Mouse march through Broadway with its latest film-turned-musical, Aladdin.  Now that Annie is closing, Disney has the family market cornered on Broadway with its long-running shows The Lion King and Newsies (Wicked is arguably the only non-Disney, kid-friendly show option). However, Aladdin will certainly have many patrons visiting without children in tow. Young adults with fond memories of 1990’s animated Disney movies and adults alike will be drawn in by the prospect of seeing one giant Genie and a magic carpet ride on stage. Diehard fans of the movie will be pleased to know that the musical has stayed true to its roots in one respect – Jonathan Freeman who plays Jafar in the new musical also voiced the character in the original animated movie.

Rocky (Feb. 11; March 13) – No, you did not read that wrong. Rocky. As in “yo, Adrian!” And, get this – it’s a musical.  Seriously.  I want this to be a joke.  I want to be lying to you.  But I’m not, so just hear me out.  My expectations for this show have been low since the marquee went up. It epitomizes the one thing that I despise about books for big budget musicals today: it is based upon a successful blockbuster movie that should not (and probably will not) successfully translate to the stage.  Here is why I am holding out hope (and, no, it is not the fact that Sylvester Stallone contributed to the book). The book was co-written by Thomas Meehan who won Tony Awards for The Producers, Annie and Hairspray. Moreover, Stephen Flaherty has teamed up with Lynn Ahrens to create the music for Rocky – their past collaborations resulted in the beautiful orchestrations and lyrics found in Ragtime and the animated film Anastasia. Rocky once told Adrian that he wanted to fight because he couldn’t sing or dance – for his sake and ours, I sincerely hope that’s not true.

Les Miserables (March 1; March 23) – I have loved Les Miserables since I first saw Colm Wilkinson’s awe-inspiring performance of Bring Him Home in the Les Mis 10th Anniversary Concert on PBS. I was 10. I promptly “borrowed” and devoured grandmother’s copy of Victor Hugo’s tale, which still sits on my bookshelf today. While I cannot recount how many times I have seen Les Mis performed, I have yet to see it on Broadway. The show was last revived on Broadway in 2006 and closed in 2008; however, it is currently running in Toronto and in 2010, it celebrated its 25th Anniversary in a very big way with a concert at the O2 Arena in London (complete with a Jonas brother, apparently). However, the people’s musical is coming back, and I could not be more thrilled. The cast is young and promising. Ramin Karimloo will be making his Broadway debut as Jean Valjean, which is a role he currently plays in Toronto. If his brilliant turn as Enjolras in the 25th Anniversary Concert at the O2 is any indication, New York audiences should be in for a treat. So, if you have seen the movie version of this classic musical then there is no time like the present to go see the real thing.

If/Then (March 5; March 27) – If/Then is an original musical, which is a rarity these days. As production costs increase and producers struggle to fill seats with patrons (let alone patrons willing to pay full ticket price), there is an understandable, yet disappointing, move towards only producing time-tested revivals or musicals that are based upon successful books or movies. Although plot details are scarce, If/Then is the story of a 40-year-old woman who moves to New York to rebuild her life. The selling point of If/Then is the cast and creative team. The Next to Normal powerhouse duo of Tom Kitt and Brian Yorkey are back together handling the book and music for If/Then. Moreover, Wicked and Rent fans get ready to rejoice (and book your plane tickets) because the unbeatable Idina Menzel and Anthony Rapp are back on Broadway and starring in this production, alongside a host of other talented actors.

A Raisin in the Sun (March 8; Apr. 3) – With Betrayal closing, A Raisin in the Sun is already being called Broadway’s next hot ticket. Why, you may ask? Two words. No, not “Lorraine Hansberry” (although that would make more sense). Denzel Washington. Washington will be returning to Broadway as Walter Lee Younger, alongside Diahann Carroll and the absolutely terrific Sophie Okonedo.  One thing is clear – Director Kenny Leon does not shy away from plays loaded up with star power, and apparently he has a soft spot for A Raisin in the Sun. Leon last directed A Raisin in the Sun on Broadway in 2004 with Sean “P. Diddy” Combs portraying Walter Lee Younger.  The story is time-tested, and audiences are sure to flock to see Washington as they did in recent years to see Daniel Craig, Tom Hanks, Al Pacino and Robin Williams on stage.

Bullets Over Broadway (March 11; Apr. 10) – Woody Allen is a divisive writer, so it is possible that a musical written by him may not be everyone’s cup of tea. However, Allen’s new musical comedy collaboration with Director Susan Stroman (Big Fish the Musical), Bullets Over Broadway, has generated a lot of buzz. The story is based upon Allen’s 1994 film with the same name and the premise should play well on stage – the plot is about a playwright who needs someone to back his new show and a mobster who is looking to impress his showgirl girlfriend. With respect to casting, younger theatregoers will be excited to see Zach Braff make his Broadway debut in this production.

Of Mice and Men (March 19; Apr. 16) – I must admit, I almost did not include Of Mice and Men on this list, but I will explain my hesitation shortly. It seems a tragedy that John Steinbeck’s classic novel has not been on a Broadway stage in over 40 years. It is ripe for revival. Chris O’Dowd who charmed audiences in the movie Bridesmaids is a respectable choice to play the mentally slow and kind-hearted Lennie Small in his Broadway debut. James Franco will also make his Broadway debut in this production as Lennie’s friend George Milton.  Franco is, admittedly, an actor whom I greatly enjoy in some roles and absolutely detest in others. Rounding out casting thus far is Leighton Meester, who, as far as I can tell, is best known for her work on the television show Gossip Girl.  Meester is making her Broadway debut as the lonely wife of the ranch boss. Perhaps you are beginning to see the root of my concern. Star power alone may draw audiences to see a show but the question remains: will this cast of Broadway novices prove that they have the skill to perform on stage?

Violet (March 28; Apr. 20) – Roundabout Theatre Company is bringing one of my favorite stage actresses back to Broadway this spring in the Broadway debut of the musical Violet. Tony Award winning actress Sutton Foster (Anything Goes, Thoroughly Modern Millie, Little Women) will be portraying Violet, a disfigured woman who journeys from North Carolina to Oklahoma in order to be healed. Additional details on the cast and creative team will be announced later, but this show was well-received off-Broadway and is definitely one to keep an eye on.

Hedwig and the Angry Inch (March 29; Apr. 22) – If you saw the opening number of the Tony Awards this year, you already know that Neil Patrick Harris is ridiculously talented (if you missed it, you are welcome). Harris was last seen on Broadway in the revival of Assassins in 2004, but, after a decade away, NPH is finally coming back to New York in the Broadway premiere of the musical comedy Hedwig and the Angry Inch. Hedwig is a rock musical about a fictional rock band that is fronted by an East German transgender woman (Harris). Hedwig has amassed quite a cult following (it is right up there with Rocky Horror Picture Show), and, with NPH on board, Hedwig may finally find mainstream popularity on a Broadway stage.

Casa Valentina (Apr. 1; Apr. 23) – Although no casting has been announced, I included the world premiere play Casa Valentina on this list based solely on its creative team and subject matter. Written by four-time Tony Award winner Harvey Fierstein and based on true events, Casa Valentina is the story of a group of men who, in the summer of 1962, went to a colony in the Catskill Mountains to dress and act as their female alter egos on the weekends. Casa Valentina is directed by the brilliant Joe Mantello, who is likely most recognizable as the Director of Wicked, but who is forever associated in my mind with the beautiful production of The Normal Heart that I saw in 2011 on Broadway. With this creative team, Casa Valentina has real promise.