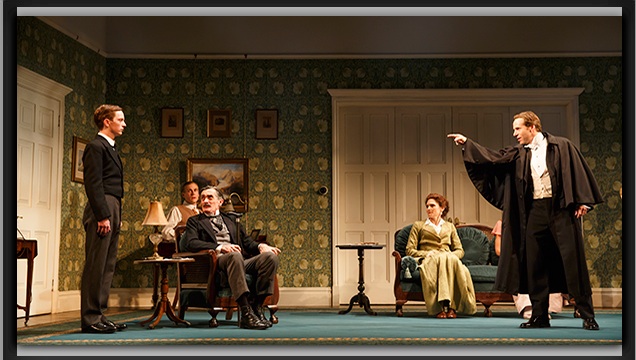 The law is reason, free from passion. Point taken, Aristotle. The law is neither sympathetic nor scornful. Everyone is theoretically equal before the black letter of the law. Philosophy is all well and good, but let’s get real for a second. While the law may be free from passion, humans are anything but. This simple fact explains why humans are far less enamoured with the concept of “the law” than they are with the morality-laden notion of justice – good and right should triumph, period.* However, as Terence Rattigan so elegantly explores in The Winslow Boy, the fight for justice is often treacherous and, though right may triumph, the costs associated with that triumph may be too great to bear.

Roundabout Theatre Company’s production of The Winslow Boy brings this charming play back to Broadway for the first time since 1947, and, with its production of Bad Jews cracking audiences up off-Broadway, Roundabout can do no wrong this season. The Winslow Boy is the story of an upper-middle class family living in Kensington from 1912 to 1914 and a father (Arthur Winslow, portrayed by Roger Rees) who fights valiantly to clear his son’s name (Ronnie Winslow, portrayed by Spencer Davis Milford) after the child is tossed out of the Royal Naval College for allegedly stealing a postal order worth five shillings.** Arthur Winslow goes to great lengths to demand that his son be afforded a fair trial, including hiring a celebrated barrister, Sir Robert Morton (Alessandro Nivola), to represent his son’s interests. However, Sir Robert Morton comes at a hefty price – as Arthur champions Ronnie’s cause, the rest of the Winslow family is forced to make great and painful sacrifices. Arthur gives up his health, the family maid (Henny Russell) lives on the brink of being sacked despite a lifetime of service, the eldest son, Dickie (Zachery Booth), is forced to leave college, and Arthur’s suffragette daughter, Catherine (Charlotte Parry), gives up the opportunity to be with the man she loves (John Watherstone portrayed by Chandler Williams).

All of this because of a five shilling postal order. Therein lies Rattigan’s brilliance. Multiple times during the play, I found myself furious with Arthur Winslow for not dropping his battle – after all, the minor success of clearing his son’s name seemed insignificant when compared to the personal and monetary costs of carrying on his fight. But, Arthur is driven by something greater than mere logic – a sense of right in the face of the naval academy’s wrong. At least, justice inspires him initially. It is hardly surprising that as time passes, Arthur’s motivation changes. He is driven by pride, by a desire to stick it to the government, and, to a large degree, by the commentary on the case propagated by the media.  In fact, the media coverage and community fanfare surrounding the Winslow case is rather epic. If Arthur had brought this case in 2013, he would have 30,436 followers on Twitter, would be scheduled for interviews with Anderson Cooper and Jon Stewart, and would be the subject of at least two viral Internet memes.*** Ultimately, it is Rattigan’s grasp of competing and conflicting motivators that makes The Winslow Boy a captivating and engaging show – so much so that the outcome of the case almost does not matter. Almost.

The Winslow Boy is generally well-cast, but it is hard to believe that the roles portrayed by Roger Rees, Charlotte Parry and Alessandro Nivola were not written for each of them respectively. Roger Rees is exceptional as the proud, witty and loving Mr. Winslow. He successfully portrays Arthur’s physical decline without losing the spark that makes Arthur such a frustrating and inspiring character. Catherine Winslow is one of the best female characters that I have ever seen in a play. She is clever, sophisticated, intellectually curious, opinionated, and politically active, and I cannot imagine a better actress for the role than Charlotte Parry. In addition to having a strong chemistry with Rees that makes the father/daughter relationship plausible, Parry’s Catherine is an entertaining foil for Alessandro Nivola’s Sit Robert Morton. Nivola may have missed his calling. His handling of a particularly tense cross-examination of Ronnie Winslow was nothing short of mesmerizing. Nivola’s mannerisms and masterful manipulation of scripted language make him believable as a successful litigator, which is no small feat. Is Downton Abbey casting? I want to see more of these actors.

Passion is a powerful motivator in the Winslow Boy, not only for Arthur but for Catherine and Sir Robert Morton as well, so much so that the characters cast off logical courses of action in favor of the perceived right courses of action. I was left wondering if the characters would perhaps regret their decisions later in life or if the path to justice would be a self-satisfying one. The only thing that I know for sure is that my evening with the Winslow family was anything but regrettable – The Winslow Boy and its captivating cast is a must-see.

The Winslow Boy runs until December 1 at the American Airlines Theatre.

* Think of it this way. If Atticus Finch had spent all of his time in To Kill a Mockingbird arguing about mens rea and invoking various rules under the Alabama Rules of Evidence, there is no way the American Film Institute would have named him the number one hero in movie history. Atticus was a hero because he stood up for what was right in the face of great adversity. Not because he knew how to properly argue a hearsay exception.