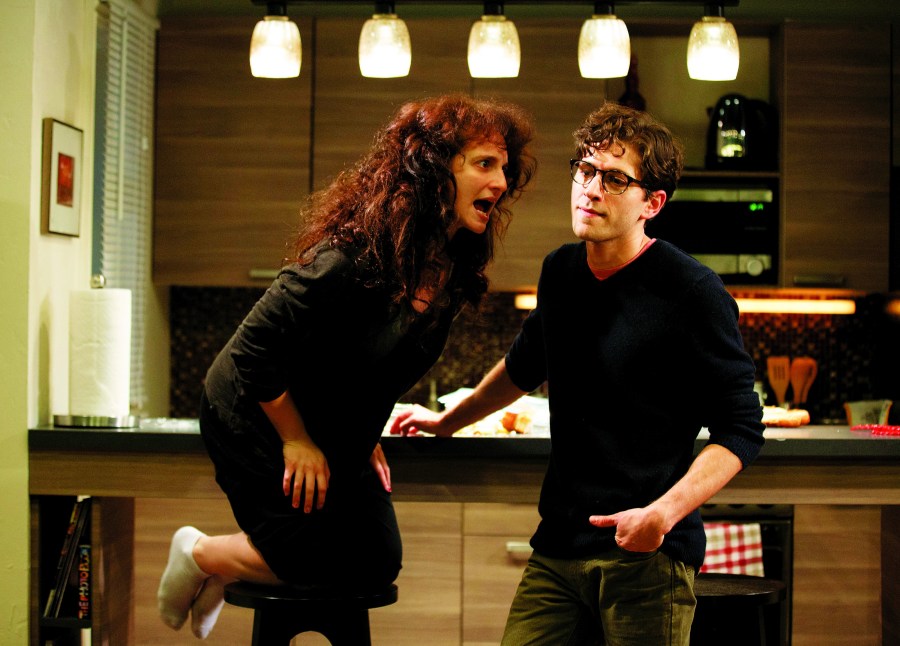 It is a rare treat when a talented cast gets a hold of an engaging play that leaves the audience cracking up one minute and utterly subdued the next. Roundabout Theatre Company’s production of Joshua Harmon’s Bad Jews, directed by Daniel Aukin, at the Laura Pels Theatre is a darkly comedic and compelling show about family, ideology and identity (and through a feat of brilliant writing and delivery managed to extract the loudest laughter of the night with the angered line “DO NOT HOLOCAUST ME”). This was my first time seeing a Roundabout Theatre Company production, but it will definitely not be my last.

Bad Jews is the story of three cousins, and one tension-inducing girlfriend, who spend the night together on the evening of their grandfather’s funeral. We are first introduced to a restrained and unobtrusive Jonah (played by Philip Ettinger) and his cousin Daphna (played with incredible energy by Tracee Chimo), who is the polar opposite of restrained and unobtrusive. Her presence fills the room and stifles any hope for meaningful human interaction. She manages to have a very successful conversation at Jonah for the first third of the show, much to the audience’s enjoyment. Daphna’s chatter sets the stage for the epic showdown that comes with the arrival of her other cousin Liam (his birth name is Shlomo, but do NOT call him that). Apparently Liam (played by Michael Zegen) missed his grandfather’s funeral because he was skiing and dropped his phone – a fact that Daphna deeply resents. That is not Daphna’s only concern, however. Daphna self-identifies as an observant Jew (just ask her . . . or wait five minutes – it is sure to come up) and feels that she deserves to have her grandfather’s chai. For those of you who are not Jewish and whose minds have turned to thoughts of Tazo Chai Frappuccino Blended Crèmes (insert Starbucks blogging break here), a chai is a symbolic piece of jewelry that is adorned with a Hebrew inscription meaning life. This particular chai means a great deal more, but I will get to that later. Jonah simply responds that he does not want the chai and does not want to be involved, so Daphna’s only hurdle is Liam. And what a hurdle he is.

To say that Liam and Daphna do not get along would be a gross understatement. While Daphna is a self-defined professant Jew, Liam appears to have rejected Judaism as a defining attribute altogether. Their conflict stems from an over-zealous need to judge the place of Judaism in one another’s lives. Daphna’s problem with Liam is that he is haughty in his dismissal of Judaism and that he takes interest in rituals and practices of other cultures, rather than his own heritage. Liam’s problem with Daphna is that she is haughty in her embrace of Judaism and that she dismisses rituals and practices of other cultures. To Joshua Harmon’s credit, both characters make excellent and intellectual arguments supporting their view and each take their fair share of cheap shots and low blows. Liam makes some particularly vicious remarks about Daphna’s love life (or lack thereof) and compares Daphna to a Nazi, and Daphna insinuates multiple times that Liam’s girlfriend (Molly Ranson) descended from genocide perpetrators. Just your typical family get-together.

However, the arguments give way to the most important question of the evening: what about the chai? As we soon discover, Liam already has it. Although it is unclear whether his grandfather gave him the chai or if Liam’s mother stole it (too bad there isn’t some legally binding document that allocates personal items to family members upon someone’s death . . . oh wait . . .), Liam intends to propose to his girlfriend with the symbolic chai. At first, this action seems odd given that Liam cares very little about Judaism – until Daphna tells the story of the chai. This chai truly symbolizes life – their grandfather survived the horrors of a concentration camp with the chai hidden under his tongue. When he moved to America after the war, he fell in love with their grandmother and, while proposing marriage, he offered her the chai as a symbol of his revitalized life.  Daphna’s retelling of the story is incredibly poignant and touching in an often tense and loud play. It is a memorable theatrical moment. The bickering between Daphna and Liam turns into an epic battle to wrestle the chai away from Liam’s girlfriend, after she agrees to marry Liam. Somehow I doubt that Daphna will be invited to that soirée.

Ultimately, despite their impassioned speeches about who deserves the chai more (Daphna as the super Jew or Liam as the hopeless romantic), neither Daphna nor Liam truly deserve the chai. Jonah does. Poor, quiet, observational Jonah cares little about losing the chai because he has lost something considerably more important to him – his grandfather – and, as the audience discovers, already made a far more symbolic and personal gesture to honor that loss.

The character of Daphna could be overwhelmingly annoying and one-dimensional in a lesser actress’s hands, but Tracee Chimo gives a nuanced and entertaining performance as the insecure and outspoken Daphna. Chimo’s mannerisms, from constantly playing with her hair and tugging at her pants, to bounding across the room, befit an attention-seeking person. As appropriately vociferous as Chimo was for most of the play, she was equally adept at handling tonal shifts in the script and drawing the audience in with startlingly quiet delivery. Michael Zegen’s Liam was an ideal foil for Daphna. In particular, Zegen absolutely rocked an extended diatribe scene that would have gotten a standing ovation from me had it not been in the middle of the play. If there was one disappointment in the play it was Liam’s girlfriend Melody. Molly Ranson did a fine job with the peppy, dumb blonde routine, but Melody was the only character that lacked depth, a fact that was amplified when she was sized-up next to the other characters.

In addition to the acting, I’d be remiss if I did not mention some great design work. Thank you, thank you, thank you Lauren Helpern for designing an apartment that actually looks like the New York apartment called for in the play – you’d be amazed how rare that is.

To close, Bad Jews may be aptly named from a plot standpoint, but these bad Jews deliver the goods with great dialogue and a hilariously dark sense of humor. Check it out.

Bad Jews runs through December 15 at the Laura Pels Theatre.