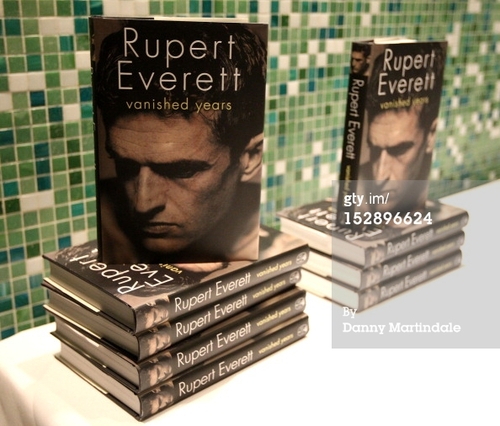 One really has to hand it to Rupert Everett. Once touted as the next great British leading man, he came out of the closet and summarily watched a once very promising film career go down, if not in a torrent of flames, then at the very least, in a rank smouldering mess that resembled nothing so much as soggy peat moss trying to catch spark. Still and all, despite the damp squib his career at times fell into, some thirty-odd years after he first came to an audience’s attention, Everett hasn’t given up.  If  you’ll pardon the pun, our 6’4”, unapologetically gay 54 year old leading man has stuck it out and in this, his 2nd and newest volume of his autobiographical writings (his first, Red Carpets and Other Banana Skins) was another best seller) he has written one of the best and wittiest show business memoirs since David Niven’s The Moon’s A Balloon. One can only pray that there will be plenty more of these, and that he will live longer than another certain centenary-passing, gin tippling queen, who alas, wrote no memoirs at all.

Part of the fun of memoirs is that they are like snapshots all jumbled up and out of context, functioning in the way memory does. One doesn’t have to have read his previous book to enjoy this one, and unlike an autobiography, this is not a story with a sequential timeline to it. It jumps all over the place, which gives the narrative a fun and bouncy feel. Mr.E is never boring, and his dash and style translate equally well to the printed page.

After his stellar early success in films such as Another Country and Dance with a Stranger, Everett was poised to become a major star, but when he came out in the late eighties, in an industry whose internalized homophobia was just a little less vocal than Russia’s is today, he watched in horror as film projects turned to ashes in front of him.  (Having said that, however, missing out on Basic Instinct 2 could hardly be called a tragedy, and what could one truly say about The Next Best Thing except to claim loudly that it simply wasn’t?)

Despite these disasters, Everett scored a string of hits in films like The Comfort of Strangers, The Importance of Being Earnest, My Best Friend’s Wedding, and two of my favourites, An Ideal Husband and a curiously unseen gem called Unconditional Love. He has been  professionally paired with some of the greatest actors and movie stars of our time, and not only held up well against them, but scored serious triumphs in the process. Critics take note; any actor who can effectively steal a movie away from Julia Roberts is not to be taken lightly. However, despite these undeniable triumphs, Everett’s career has been curiously spotty. It’s never had the momentum that say, Matt Damon’s or George Clooney’s had, and that may be in part to our scribe’s peripatetic wanderings and impulsive nature.

Most actors whose film and television careers dry up, usually find themselves scrabbling desperately about on the homeshopping network, or doing time on reality TV while trying to lose weight, play poker or get out of rehab. There are the few clever ones who attempt the unthinkable and  go back to work in the legitimate theatre to try and improve themselves at their craft, and lo and behold, a lot of them succeed. There are some who break out into successful work behind the scenes as directors and producers. Then there are a very few who become writers, and delightfully reinvent themselves as they strike out in ever different directions. It is in this  vein happily, that Everett has found his second métier, and delightfully for his new book, he has cheekily taken himself to task in it. He cheerfully confesses to having a near-Oedipal fixation on Julie Andrews as Mary Poppins (and one wonders how Dame Julie, with whom he has worked several times, feels about this near-stalking obsession) and he dismisses Helen Hunt with a rhyming sobriquet one wouldn’t dare use around anyone with a double X chromosome. If however, he skewers people, he does it honestly, and ultimately there is no one he ridicules or sends up more rottenly than himself. He’s the kind of guy you wish were your gay older brother, or badass uncle, the kind that the more conservative elements of your family never approved of.

He’s a Cary Grant version of Auntie Mame, (or more specifically, her acid tongued best friend, Vera Charles) and as you read these pages, you keep hoping he’ll suddenly show up at your door and haul you out for an evening of unexpected debauched frivolity, trying anything from attempting a disastrous American sitcom, to wandering nude through a German leather bar, to keeping you in stitches backstage as he snipes and trades quips with his brilliant dresser, Mr. Geoffrey, whilst gossiping about Angela Lansbury, who is just seated downstairs.

In Vanished Years, Everett does it all, and takes you on a ride through some of his more madcap adventures in the theatre, his self-professed failed charity work in the eye opening beauty and tragedy of Cambodia, the deaths of friends and family, and the pain of love not fully realized. He examines the famous with an unjaundiced eye, and he likewise examines those you will never know or meet, and gives them the same clear eyed consideration he gives the celebrities who have populated his life for so many years. Everett has lived a life most people’s eyes would pop out over, and the great delight of this book is that our narrator seems as wholly surprised and delighted with recounting his adventures as we are about hearing them. His real gift is his curiosity, and it is this which saves him, for it gives his humanity a great and unvarnished joy.

When reminiscing about the loss of his friends Isabella Blow and Natasha Richardson, he makes both women seem so alive on the page, that we feel we have lost them both personally as well. His description of his father’s final years will make one laugh and choke up at the same time and his blow by blow (no pun intended) account of his brief adventure in a nude German leather bar will have you doubled over in laughter.

Whether briefly remembering a boy he had an adolescent fling with at his boarding school, called, rather unbelievably, Ampleforth, or giving a brief history of St. Bernadette of Lourdes, Everett recounts everything in a breezy, off-the-cuff manner that is extremely appealing, and which make his affecting moments, such as his recollection of the last time he saw Natasha Richardson alive, much more poignant. In one of the most moving chapters in the book, Everett recalls being at her funeral, and looking down at Natasha in her open casket, remembering the last time he ever saw her. She had come to see him in the Broadway revival of Blithe Spirit, and in his unthinking cavalier fashion, he greeted and hugged her and then left her to his co-star Angela Lansbury while he went off to party. He never made the connection at the time that Natasha might have gone to the trouble of seeing the play in order to see HIM, and to reconnect with HIM after a long absence. Only realizing his folly while walking back across town in the grey sleet and snow after her wake, his self-castigation becomes all the more unbearably sharp when he realizes that she died less than a week after that visit in a skiing accident, and that his play was, in fact, the last play she ever saw.

Likewise, his recounting of his father’s final years are filled with so much humanity and love that one comes away not only understanding his parents,“the Major” and Mummy, but grasping how they shaped this enfant terrible themselves. Everett handles describing his parents’ aging and his father’s decline with grace, dignity, wit and an overwhelming adoration that is subtle, keenly felt and frequently hilarious. In this day and age of celebrity dysfunctionals, it is a relief and a wonder that a self-professed bad boy/maniac/queen should ultimately turn out to be a devoted son, a product of a loving and stable home, and in his devotion to his parents, the nice  guy we suspected him of being all along.

The stories are winningly told, even the tragedies, and they run the gamut of human experience, but what sets them apart from other celebrity tell-alls, is that Everett is actually and quite honestly a brilliantly gifted writer. Scathingly intelligent, acutely perceptive and with a laser-like observational eye, he possesses a grasp of language, place, situation, time and character that puts one in mind of Graham Greene or Evelyn Waugh at his most withering. He makes scenes come alive in an almost filmic way, undercutting scintillating dialogue with apt descriptions of his surroundings that fill the imagination so completely, that one feels one is actually there with him. I’ve never been to Cambodia, never even seen pictures of the place, but thanks to Everett’s microscopically astute eye for detail, I feel as though I’ve been there, breathed the air, met the people, and seen  the catastrophe of genocide through his eyes. It’s a shame he’s such a gifted actor, as one is tempted to holler, “Rupie! Give up your day job! Write instead!”

His tone of voice is just the same laconic, sometimes squeakily outraged, Oxbridge upper class toff voice we’ve heard so often in his movies, but with a charged emotionalism that lay just beneath the surface. This narrative voice gives the lie that although he may seem to be languid and unconcerned, this is a man who passionately cares about what is going on around him, and in the words of Thornton Wilder, Everett “pays attention” to what he sees, hears and feels. That said, he feels and cares deeply.

This is no more apparent than at the beginning and at the end of the book, with Everett’s sojourn to visit Noel Coward’s grave at his aptly named estate, Firefly, in Jamaica. Everett meets a variety of people en route, including one elderly actress he recalls seeing in a local cinema as a young teenager. He tries to connect with the ghost of Coward, and wonders if the old man, although buried there, is actually still in this old estate, even if it is filled with his faded photographs, yellowing music scores and his paintings of Jamaica’s desolate, beautiful views. Everett isn’t unaware of Coward’s unhappiness in those final years of his exile, for he can uneasily feel and connect with the disconsolate anger of a gay genius who was forsaken by a country he did so much to exalt and define, and who, in remonstrance, smoked his life away in response, dying there of heart failure in 1973. Everett peruses the Master’s effects and wonders if Noel too, had doubts about which way his life had taken him, and if he ever wondered whether or not he knew his star had set. That he ends his memoir there where it began, at the grave of one of the greatest gay artists the world had ever known is significant. At the ending is the beginning, and Everett seems to tell us that in the face of so many of his own endings,  his own remarkable journey is still going strong. Vanished Years is the reminiscence of times and experiences lived, of people loved and lost, and it is above all else, a book of unquenchable energy and élan, the viewpoint of a remarkable man and writer at the peak of his powers. Long may he reign.