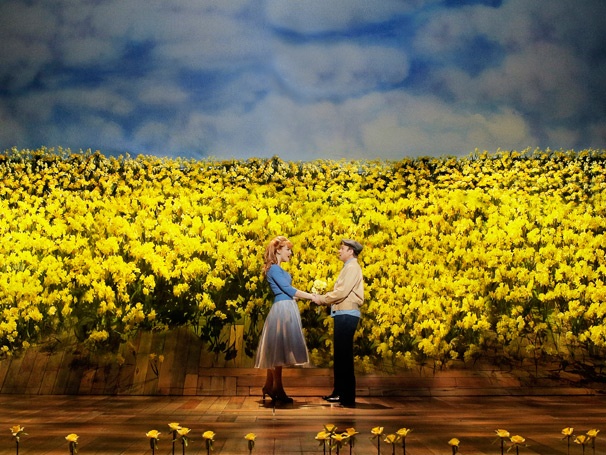 I am not a public crier. Of the hundreds of movies and theatrical productions that I have seen in my 26 years on this planet, I can count on one hand the number of times that I cried in a theatre. So, you can imagine my bewilderment when I found myself wiping tears away with my blazer sleeves. I was bewildered because, while the movie Big Fish left no lasting impression on me, the Preview performance that I saw of Big Fish the Musical was anything but forgettable.

Big Fish is the story of Will Bloom (Bobby Steggert), a young man who embarks on a journey to connect with his long-absent father, Edward Bloom (Norbert Leo Butz), and to discover if there is any truth behind the heroic “auto-biographical” tales that his father tells before his father succumbs to terminal cancer.  Big Fish weaves a grand bedtime tale, defying time and the constraints of reality to deliver the story of an ordinary man who willed to his loved ones an extraordinary life. The play opens at Will’s wedding, where we are introduced to the rational, career-driven Will and his father Edward who has a larger than life personality and enjoys being the center of attention (much to Will’s chagrin). After Edward learns he has cancer, Will and his pregnant wife Josephine (Krystal Joy Brown) treat the audience to an exploration of Edward’s greatest stories –encountering a witch, befriending a giant, joining a circus, falling in love with Will’s mother Sandra (Kate Baldwin), and fighting an assassin.

As Will uncovers some troubling information about his father’s past, Edward’s heroic persona begins to crumble, leaving a weak and dying man huddled on the floor of the home he worked so hard to build. However, Will’s continued research into his father’s past reveals Edward’s greatest story left untold and ultimately leads Will to tell his own epic tale (I will say no more. It’s a surprise ending).

John August’s book is not without flaws. Will’s frustrations with his supportive father early in the show seem misplaced, until he sings a song explaining why he feels estranged from his father. In a case of “show me, don’t tell me,” more background on Will’s relationship with his father early in the show would have allowed the audience sympathize with Will (or at least understand where he was coming from).

The casting is generally superb. I first saw Norbert Leo Butz on Broadway in Catch Me If You Can, and he was clearly enjoying his time on stage. The next day he took home the Tony for Best Actor in a Musical. In Big Fish, NLB is, much like his character, a larger than life presence on stage. An experienced Broadway lead actor, it is unsurprising that NLB is an incredible vocalist. He morphs from old to young Edward with startling ease, and his energy leaves the audience enthralled with Edward’s fantasy world. As much as his vitality carries the show, it was NLB’s portrayal of the distraught, vulnerable and dying Edward that had me crying. I am not pretentious enough to call a Tony race this early in the season, but I am channeling my Nate Silver-like powers and predicting that NLB will be nominated for Best Actor in a Musical for this role.

While the entire cast was excellent, several performances stood out. Kate Baldwin’s Sandra is a beacon of strength for her family, and a sensible and self-reliant woman. Moreover, Baldwin’s rendition of “I Don’t Need a Roof” brought down the house. Zachery Unger, who portrayed Young Will, was precocious and garnered some of the loudest laughs of the night.  Ryan Andes had many scene-stealing moments as Karl the Giant and made dancing around stage in, what I assume were, stilts look surprisingly effortless. If there is a weak point in the cast, it is Steggert. At times, Will appeared almost nonchalant about his supposedly strained relationship with his father. Despite this failing, Steggert had some moving moments in the last half of the second act.

Andrew Lippa succeeded in creating a memorable musical score to match the exceptional plot. I cannot get the fun and upbeat “Be the Hero” and “Out There on the Road” out of my head, and I thoroughly enjoyed Edward and Young Will’s duet in “Fight the Dragons.” The uplifting and romantic (and visually stunning!) first act closing number “Daffodils” is one of the best intermission lead-in numbers that I have seen in awhile, and Baldwin’s touching rendition of “I Don’t Need a Roof” as she cradled her husband played a substantial role in my minor emotional breakdown.

This is a show that calls for grandiose sets, and Julian Crouch did not disappoint. A flowing river (complete with a mermaid and fish) was a central set fixture, and quick set changes whisked the audience along with the plot to great effect. The scene leading to intermission was particularly breathtaking as the stage filled with bright yellow daffodils. My only complaint was the use of projected images. Unfortunately, projections are becoming more popular in live theatre. Occasionally, they blend well with set pieces, but, often, they are distracting and cheesy. I imagine acting with moving projected images is much like acting with a green screen but, without the editing and ability to re-take shot, it nearly never works. In this case, some of the projections were disappointingly cartoonish, including those used in a key chase scene.

Ultimately, Susan Stroman has succeeded in directing a wondrous and surprising show that is sure to be a hit of gigantic proportions. Big Fish is a must-see. Just bring tissues.