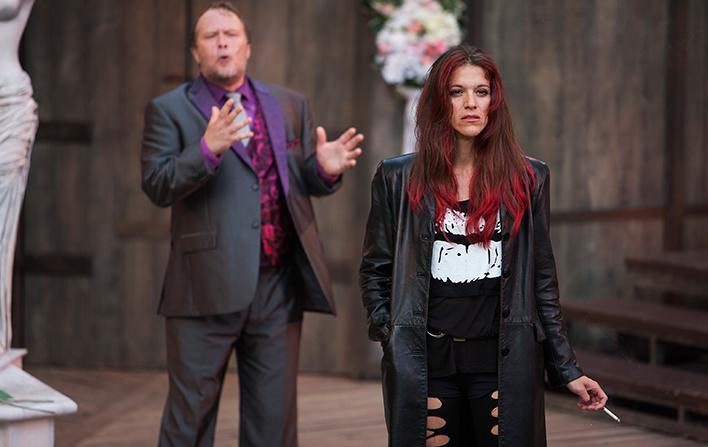 In live theatre, you know that anything can happen – props don’t work, actors skip a couple of lines, or segue into ad libs. It is what makes it exciting and fresh. When the live theatre is outdoors, the elements of chance are higher, from planes overhead drowning out lines to picnicking (drunken) audience members who talk through an important soliloquy. And then there is the weather.

The weather is the reason I am writing this review – a substitute for the intrepid writer who knows her Shakespeare inside and out, and has a handle on the Toronto theatre scene. Sadly, the performance of Taming of the Shrew in High Park that she was supposed to see got rained out. I was there too – we had just nicely settled into our seats and unpacked our take out dinners when the heavens opened. We scooped up our Greek salads, blankets and bags and dashed through rain and lagoon-like puddles to the car, picking up some “rain checks” on the way. But Kelly was heading off to Niagara-on-the-Lake to cover The Shaw Festival the next day and wouldn’t make it back before Shrew‘s closing night. So I’m writing about it in her place.

There I was on the final Saturday of the summer, total amateur, watching the last performance of Shakespeare’s sexist comedy to a packed park. Packed actually does not really convey the squished seating situation. The audience was jammed into the available rows, overflowing the edges of the seating areas and standing at the back. Memo to self: next year go EARLY in the season!

The play itself is about as sexist as they come. Just check out the title! A man with two daughters, one tough, brash and outspoken, the other beautiful, sweet and obliging, decides that the elder must marry before her lovely younger sister can wed. A braggart who is in need of some serious cash rolls into town and agrees to wed the older daughter for her dowry, planning to “tame” her into a “good wife”. Meanwhile, would-be suitors of the younger daughter contrive to win her affections by posing as tutors. Really!

However, director Ted Witzel did a marvelous job at capturing all that was funny in Shakespeare’s script, and adding to it with modern updates that worked well.  He had Ryan Hollyman as Biondello deliver Starbucks orders to various characters, highlighting personalities succinctly through their telling choices. It was one of my favourite touches. I loved Hollyman’s performance too – he was consistently funny and engaging.

Sophie Goulet as Katherine was the cornerstone of the production. Her Kate was feisty and tough, and her “capitulation”, especially her speech at the end, certainly put a new spin on the words she spoke. They were drenched with sarcasm and bitterness, and her message was clear. I overheard one audience member explaining his conclusion to his friend on the way out: once Petruchio saw how strong Kate was, he realized that it was this strength he was attracted to and he loved her because of it. Don’t think that is exactly what Shakespeare intended, but in the hands of Ted Witzel, that is what happened. Yay!

So, the sexist play turned out to be thought provoking, the cast was solid, the direction terrific, the set worked well and the physical comedy was well executed. The squished together audience had a marvelous time and the atmosphere was happy as we left the park. I’d call that a successful night at the theatre!