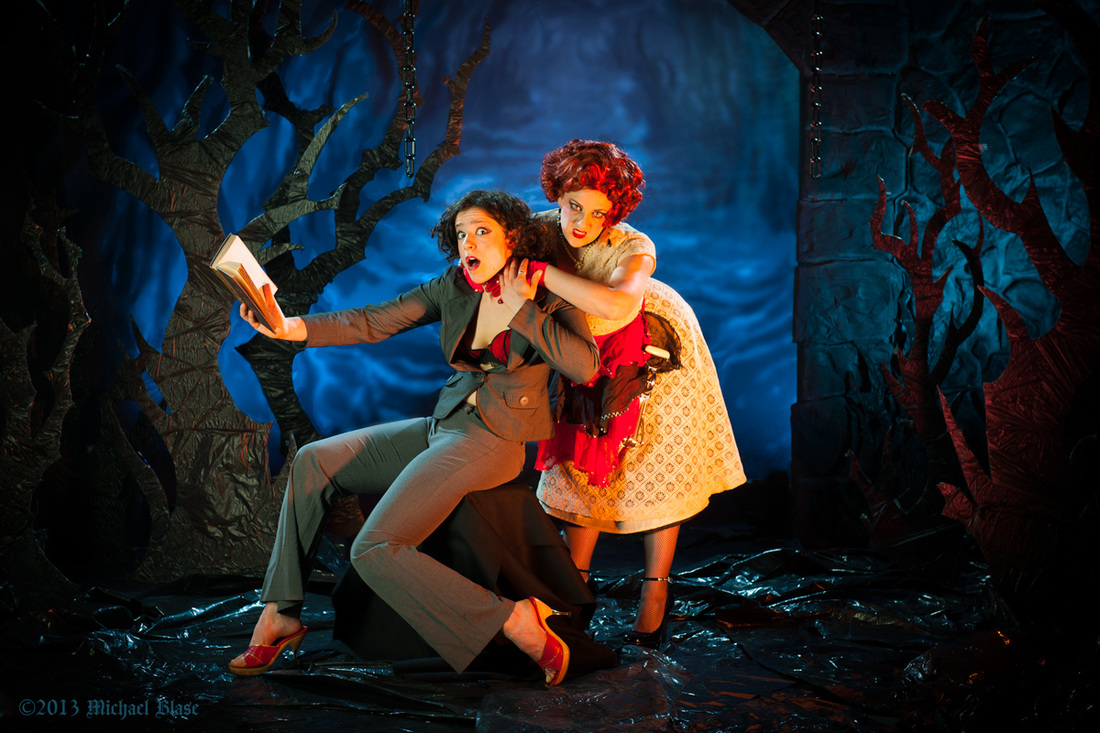 I am a Manhattanite. If I make it north of 14th Street, I am probably on my way to see a show or am playing tour guide to visiting friends. God forbid I have to cross water to get somewhere. However, last Saturday night, I headed to Bushwick in Brooklyn for the first time, which has a thriving artist community and borders the hipster mecca of Williamsburg, to see the horror anthology The Dead Dream Machine presented by Eric Schmalenberger and Raging Squid Ink at the La Luz Performance Space. Walking past graffiti-filled warehouses and through empty streets, I cannot imagine a better location for The Dead Dream Machine – I was completely spooked by the time I made it to the La Luz.

The Dead Dream Machine is a series of horror vignettes presented through dialogue, dancing, puppetry, aerial gymnastics and even magic by a diverse cast of talented performers. Like most innovative theatre, some of it works and some of it does not, but the show was consistently entertaining. If there is a discernible plot, it is perhaps the exploration of one girl’s dreams brought to life through a dream extraction machine, but the plot is little more than a platform to present a series of both horrifying and comedic skits. Highlights from the show included a scene involving a ghost killer plucked straight from an urban legend (with a humorous twist courtesy of the wonderful Elena Delgado), an entertaining bartering scene between a high-powered businessman who suffers a heart-attack and his personal Charon, an unfortunate interaction between a socially-awkward (an understatement if ever there was one) scientist and his test-subject, and the greatest concert of all time, which apparently takes place at a goth club in Brooklyn.

One of the pitfalls of the show was the interspersion of unoriginal material. Eric Schmalenberger drew some of the biggest laughs of the night with his slightly insane character Impresario. However, with his high-heeled black boots and aloofly dead-panned lines, I could not help but wonder if a Bushwick cast of Rocky Horror was missing their Riff Raff. At other points in the show, it was the costumes that lacked originality. A serial killer dons a Leatherface-like mask, a deathly figure wears a mask reminiscent of the “stoner” Scream mask from Scary Movie, and one actor sports an I Love Lucy-inspired housewife get-up.

Moreover, some of the material seemed misplaced in an otherwise less-than-serious show. My least favorite one-act of the night, involving a kidnapped pharmaceutical developer, was laden with overt social commentary and was little more than a soapbox from which the kidnapper subjected the audience to a convoluted speech about the developer’s heartless behavior in his professional endeavors. Although the script is crafted so as not to totally vilify the developer, an effort that I noted and appreciated, the entire interaction seemed forced and contrived.

Despite some plot failings, the ensemble of The Dead Dream Machine was remarkable. The variety of artistic mediums incorporated in the production allowed each performer to showcase his or her expressive strengths.

The numerous dance numbers, choreographed by Rachel Klein and Aurora Black, were adept at sustaining the uneasy atmosphere during scene changes. In one memorable number, several female dancers exited a closet of stashed bodies (victims of a science experiment in human interaction gone wrong) and mimicked rag dolls manipulated on stage by unseen hands. Much like the woman murdered on stage and thrown into the closet with the dead dancers, it is easy to assume that all of the dead women were similarly outspoken and were killed because they refused to conform their actions to one man’s idea of a romantic encounter. The expressionless dancers are an eerie embodiment of the killer’s apparently ideal woman. Plus, anyone who has seen the movie Child’s Play knows that there is nothing more sinister than a doll. Except perhaps a clown. Elena Delgado’s aerial work was also visually striking (and slightly terrifying –I was prepared for an injurious fall a la Spider-Man: Turn Off the Dark), and Aurora Black had numerous ballet interludes that mixed classical ballet with contemporary dance very successfully on the compact stage. Moreover, writing as someone who lived with a burlesque performer, I was impressed by the creative integration of burlesque elements throughout the show.

In addition to the dancers and aerialists, I enjoyed the breadth of Charlie Wilson’s performance. In a show filled with memorable misfits, his portrayal of “normal” guy Lawrence was understated in the best possible way, and his comedic timing was impeccable as an awkward and perverted scientist. Also, somewhat inexplicably, I could not take my eyes away from Arden Leigh when she was on stage. She epitomizes stage presence. Her biography credits her as a professional seduction coach. I have no clue what that means, but I totally buy it.

Each performance also features a guest star who serenades the audience as the “Shaman.” The guest of the evening was Randy Jones. For those of you under 45, allow me to save you time on Wikipedia. Mr. Jones is best known as the Cowboy from the Village People. For those of you under 35, the Village People was the late 1970’s version of the Backstreet Boys. For those of you under 20, the Backstreet Boys was the late 1990’s version of One Direction. Now that we are all on the same page, let me state for the record that Mr. Jones can sing, quite well actually, but, unfortunately, his appearance felt like little more than a gimmick.

All in all, I enjoyed living the nightmares produced by the The Dead Dream Machine, despite its many technical flaws, plot holes, and offbeat location. In fact, those quirks are a few of the reasons that it worked. Theatre often demands the temporary suspension of rational thought and The Dead Dream Machine has no pretense of highbrow art. It is just creepy fun.

The show runs from September 20 to October 13 at the La Luz Performance Space.