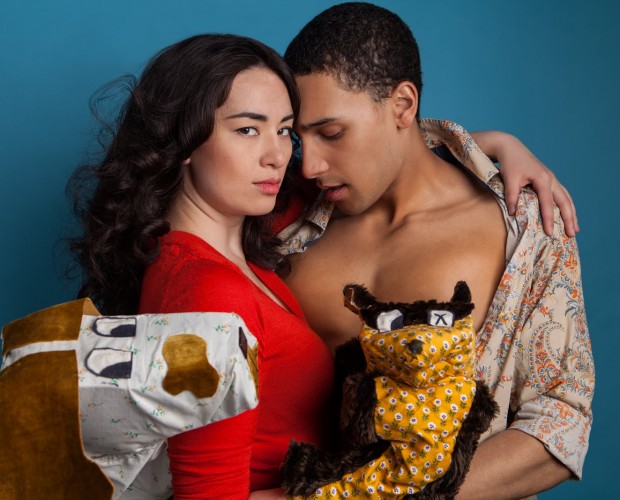 CLICK HERE to read my review of the one Must-See production I’ve identified so far this SummerWorks, Wild Dogs on the Moscow Trains.

Wild Dogs aside, my first few days at Summerworks ’13 have been a mixed bag. I started off with the crazy surrealist black comedy Holy Mothers that is, as someone I know aptly put it,  “very German”. It’s very surreal and, if you can make it to the end, ultimately dissolves into a mockery of itself that makes everything make a lot more sense. But despite a strong performance from Vickie Papavs (contrasted against Lorna Wilson’s uneasy turn) and a redeeming final act, Holy Mothers was entirely too poop-reliant for my taste.

Alzheimer That Ends Heimer was next. I chose it because I’m very often moved by the melancholy of tragedy explored through comedy, and it was directed by Jordan Pettle whose work with Soulpepper has made him one of my favourite Toronto artists. I had high hopes for the musical memoir but it lacks focus, leaning on a mélange of storytelling crutches and fully committing to nothing. The author Jay Teitel is also the narrator, though he admits up front that he’s not an actor. Because the play’s central figure, George, is Teitel’s late father, the personal connection makes the narration poignant. But George was also Pettle’s grandfather (he’s the playwright’s nephew), begging the question, if the personal connection is there either way, why doesn’t the actor play the narrator so the writer can focus on the writing? Teitel is a stiff performer and Pettle a merely adequate director; no one is in the role they perform best in and it shows in the quality of the piece. Kathryn Davis, Ben Irvine and Amy Rutherford are charming and/or amusing as needed but their roles are gimmicky and ultimately don’t affect the audience the way the narration has the potential to. Alzheimer That Ends Heimer is a good idea with good talent that should be better than it is.

I then made my way to the festival hub at the Lower Ossington Theatre for Andrea Scott’s domestic drama Eating Pomegranates Naked. Word on the street is that this show had a very rough opening performance and thus is getting a little bit slammed. I saw its third performance and can report that it is far better than reported, if not executed quite as well as it could be. What begins as a comedy of manners and political correctness at a dinner party hosted by an inter-racial couple, Scott and Sera, for their friends (one a single gal, the others a doctor and his new wife everyone thinks is a moron) becomes a series of duets about relationships, parenting and the struggles of modern conception. The dinner party scene is excellent, rollicking along with big themes lying underneath witty comedy and poking their controversial heads out at unavoidably poignant times. The shift of focus and tone seems strange, separating the beginning (which also features Scott giving an amusing presentation about branding that is very loosely connected to everything else in the play) from the rest of the far more apparently serious piece. There are moments of greatness among these final scenes (Scott’s account of Sera’s miscarriages is nothing short of shaking as delivered by Eli Ham at his most vulnerable) but the play promised at the dinner party is, I think, better than the play Eating Pomegranates Naked ultimately delivers.

Family Story was probably the weirdest thing I’ve seen at SummerWorks so far. No, it’s definitely the weirdest thing I’ve seen at SummerWorks so far. It has its charm, I suppose, and is a welcome break from the all-encompassing darkness that marks so many shows at the avant-garde festival, but it doesn’t make quite enough sense amidst its hearty cavorting (and dancing, there is dancing, with remarkable abandon). Ostensibly, Family Story is about a girl, Gentle Rain, who explores her family history through a mess of objects- a kerchief, a leather jacket, a record player. The second best thing about Family Story is the presentation; staged at Gallery 1313, the audience sits amidst the objects as if in a museum of irrelevant family history, a caricatured family tree illuminating the complicated connections. There isn’t much point to Gentle Rain’s exploration beyond vague and unoriginal questions about sense of self but some of the mini-stories in her family history are at least interesting (I particularly enjoyed the hesitant, sock hop romance between Phrasey Beanprior and Troutblazewell played by Rebecca Applebaum and Kaleb Alexander). The first best thing about Family Story is Cara Gee, who is not actually the star despite what the posters strongly suggest. But despite the fact that Gee is merely a member of the ensemble taking on various ancestral roles just like everyone else, she sort of is the star because she simply stands out so clearly. She’s funny in both  still and wacky ways and has incredible command of the stage. Family Story lacks cohesion or any sense of real purpose but it’s light and silly and it has Cara Gee so it comes out alright in the end.

My second day at the festival started off with the biggest show of the year- The Life of Jude. When I say biggest I don’t mean buzziest or most likely to take the world by storm, I mean literally biggest. There are 21 castmembers (some of whom are among the biggest names at the festival this year), a bunch of musical numbers, and a story of biblical proportions. Sort of. It’s the story of a man named Jude who thinks he’s chosen by god and proceeds to screw up his life dramatically, in the name of god. It’s a sort of strange phenomenon, The Life of Jude, being both extravagant and large unimpactful. It’s plenty entertaining- the songs are catchy and there are some good performances, especially from Adam Kenneth Wilson as Jude and Kevin Bundy as a conflicted but kind priest. The Life of Jude is well-executed but just not that interesting.

I Am Very Far, on the other hand, is very interesting. Billed as a story about processing the death of a loved one, it is one of those pieces that seems to exist (or rather work) more as visual and spoken word poetry than as a “play” (a not uncommon occurrence at SummerWorks). Some of the physicality of the piece is fantastically visceral (the sequence where one actor walks on the tops of his toes is deeply troubling) and the spoken word elements are extremely interesting, linking lists of events or phenomena that elicit similar sensations. I also thoroughly appreciated the haunting soundscape though I would have preferred to hear more of the cello that sits teasingly on stage throughout the play (I always think the world needs more cello). However, the various elements of the piece don’t necessarily all go together in way that cohesively tells a story and suggests a throughline of feeling. Where I Am Very Far connects most strongly with its founding principles is where it finds the most success: Philip Furgiuele’s account of caring for his mother and his guilt around his father’s passing, Michael-David Blostein’s sympathetic attempts to check in with his grieving friend via email, the almost surreal life insurance pitch- they’re emotionally and presentationally diverse sides of the same thematic coin. I Am Very Far doesn’t go quite far enough in exploring the deep well of possibility in its subject matter, it gets distracted along the way, but it’s very much on the right road.