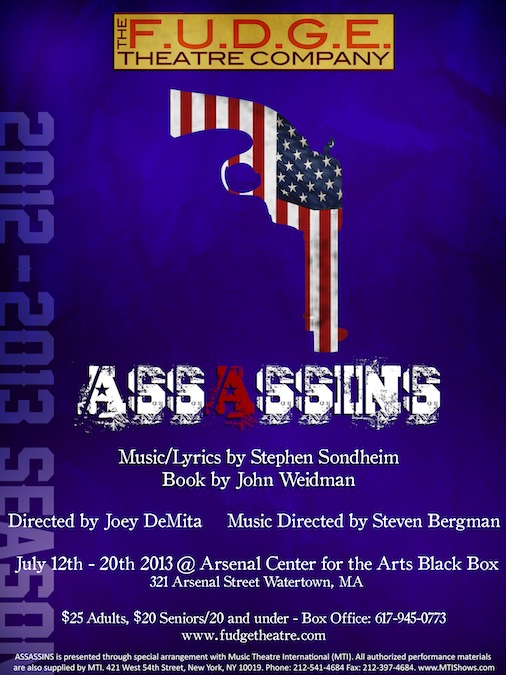 “Everybody’s Got the Right” to See F.U.D.G.E.’s Assassins

I have unrealistic expectations for Assassins. It is easily one of my favorite shows, falling behind only Into the Woods as my favorite Sondheim. I know how odd that makes me, as a person and a theatre aficionado, and I give you free reign to judge me. F.U.D.G.E. Theatre Company’s production of Assassins has some impressive and moving moments, but fails to really inspire like some of the company’s other works (Spring Awakening quickly comes to mind, with some shining work in both Parade and Carousel). The show is still incredibly important to see, especially in our current debate regarding gun control, publicity, and politics. The company’s commitment makes up for most, if any, of its deficiencies.

I think my biggest critique is the lack of pizazz in the opening number, “Everybody’s Got the Right”, one of my favorite openers of any Sondheim show. I didn’t always understand Kelton Washington’s choices as the Proprietor, and it felt like he didn’t quite understand how he fit into the rest of the production. He has a star-quality for sure, but I felt like he might have been miscast for the mystical Proprietor. As the audience is introduced to each of the Assassins, I had an uneasy feeling; something was just off. It wasn’t until later scenes with all of the Assassins that I realized that the Assassins never feel like they truly embody their time period. In fact, they interact as if they can peacefully exist in the same purgatory of the carnival scenes. This coexistence may seem almost desirable; the chemistry is strong amongst the Assassins. Yet, without the feeling that something is truly wrong with the Assassins coexisting in the same time and place, the production (and therefore the audience) misses one of its key components: the mystery and eeriness of their stories building upon each other in haunting ways. The production should feel off-kilter because we glimpse into the minds of some of the most famous historical figures for their momentary actions.

Jim Petty’s John Wilkes Booth grows on me. While his barn scene seems detached and almost leisurely, his later scene with Jared Walsh’s Lee Harvey Oswald is truly a gem. Petty and Walsh feed off each other’s energy and conflict beautifully, driving the story in exactly the right direction, at exactly the right pace. The scene buzzes because, for one of the first times, the audience picks up how “off” this scene really is to observe. Oswald and Booth should not be having this conversation, but, at the same time, Petty and Walsh are so convincing that we can’t help but believe that this conversation could really occur, if only in Oswald’s head moments before his fateful decision. Equally eerie is Ian Flynn’s Charles J. Guiteau. Flynn embodies the optimism and disturbed nature of Guiteau to sell his conviction to get his dream of being Ambassador to France (a request that never stopped amusing me for its kookiness). His “Ballad of Guiteau” is a soaring conflict, which allows us to see the struggles for the incredibly dimensional character. Flynn does an admirable job fleshing out this character’s struggles, right before the audience’s eyes.

Unfortunately, many of the other characters fail to rise to the level of their characters’ dimensions. Weidman creates an incredible book for this musical that might surpass Sondheim’s music (a compliment that is rarely given in musical theatre). In writing this musical, Weidman created many difficult moments for actors to tackle with conviction. For instance, Patrick Harris’s Sam Byck has two long, complex, and troubled monologues to deliver. However, Harris sounds more like a stand-up comedian rather than a conflicted and torn man. We don’t see the moments and choices resonate with the actor and character; it feels like a rehearsed speech without the inspiration of discovery, a necessary ingredient for each of these Assassins who are faced with impossible choices and even harder consequences. Ben Gold’s Leon Czolgosz never shows enough frustration with his choices and predicament. I never felt like he lacked plausible alternatives. Similar criticism could be given to Ben Oehlkers’s Guiseppe Zangara. I will admit that both characters are written the weakest, but I still hoped for these actors to flesh-out some of their decisions. In fact, that’s the charm of Assassins; for once, the viewer gets answers where none exist. While the actor may have the difficult task of creating a real person, he or she has an even more daunting duty to explore the “whys”, despite the lack of clear answers.

Catherine Lee Christie’s Sara Jane Moore delivered a humorous turn, but she never seemed to struggle for the answers as an actor, merely going from joke to joke. Katie Preisig’s Lynette “Squeaky” Fromme shows more frustration and yearning, but she also has a beautiful and iconic song, “Unworthy of Your Love” with Ben Sharton’s John Hinckley. I wish I had more of Hinckley because Sharton does a good job of showing a disturbed adolescent with understated tones of morbid obsession. His progression as an actor is impressive and his voice is soaring in his duet with Preisig. The ensemble is especially strong in this production, an unexpected but welcome touch, especially in “How I Saved Roosevelt”. I wanted a more dynamic “Something Broke”, but I think I am forever biased in favor of another production’s featured soloist; I still shivered and trembled during this production’s interpretation of this underappreciated song.

Which brings me to the highly anticipated Jared Walsh. Walsh is a favorite of mine since his award-nominated performance in Spring Awakening as Melchior. Walsh is given the challenging roles of the Balladeer and Lee Harvey Oswald. He rises (mostly) to the challenged based on his especially strong vocal talent and charming personality. I disliked, however, that his Balladeer lacked a personality and purpose. I could just be frustrated because I have yet to see an actor make sense of this role beyond a mere plot device by Weidman and Sondheim. Luckily, Walsh could sing the phonebook to me and I would gladly listen. In fact, he brings his own voice to the role, never sacrificing his unique vocal talent to the whims of Sondheim. While some people may critique that Walsh’s voice never fits the many styles that he is called to tackle as the Balladeer, I appreciated his original interpretation with his rock voice. Luckily, his Lee Harvey Oswald is powerful, and shows once again that Walsh is a masterful actor, a talent that is rarely tapped enough in musicals. Unlike many musical theatre actors (especially male actors), he never feels like he is just bidding his time until his next musical number but instead commits to every moment, whether acting or singing.

I have a deep respect for Joey DeMita as a director and theatrical artist. He is masterful at using the Watertown Arsenal Center for the Arts Black Box to meet his needs. However, this production lacks the vision that I’ve seen in some of his prior productions. Maybe I’m overly critical because I’ve seen too many productions of Assassins (with the exception of Fiddler on the Roof and Into the Woods, I have seen Assassins more than any other show, oddly enough). Even his directing notes in the program shed little light in his decision to direct this show right now. Luckily, Sondheim can mean many things to many different audience members. I heard audience members mention the glorification of the gun, the stigma of the media, and the search for answers where there are none. However, call me picky, but I want the director to give me a focus, a lens, to appreciate and understand the show. DeMita almost seems to go for something with Washington’s Proprietor giving the Assassins important props and interjecting himself into their scenes. Walsh’s Balladeer also silently observes. However, it never quite gels for me as a clear vision. What purpose does the Proprietor serve? Who is he? Is Walsh observing as the Balladeer or as Oswald? Is this their story? Or is it all of the Assassins’? Regardless of which decision, what does that say about our society and world now that warrants telling this story?

Notwithstanding the answers (or lack thereof) in this production, F.U.D.G.E Theatre Company’s Assassins is an exhilarating ride into a rarely-told musical about some iconic (and obscure) members of American history, told with commitment and energy by this cast. As always the music direction is crisp and wonderful by Steven Bergman, and that alone warrants attending this production. This production runs until July 20 at the Watertown Arsenal Center for the Arts Black Box Theatre.