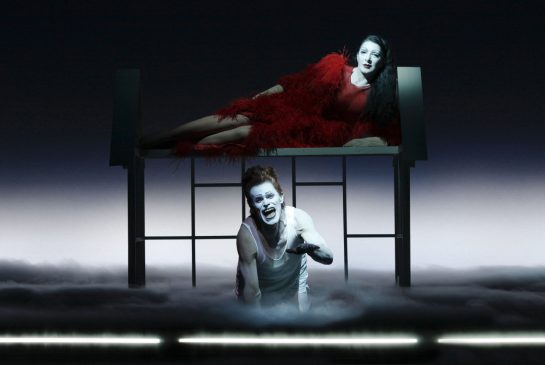 At Luminato: The Life and Death of the Artist as Idol

In North America for the first time as well as opening the first night of Toronto’s Luminato festival, The Life and Death of Marina Abramovic is a beautiful and strange marriage of opposites that might be lost on an audience distracted by their thirst for celebrity worship. The annual ten-day Canadian celebration of the performative arts has the familiar tactic of securing headlining names and inaugural premieres, for which the stargazers arrive in droves. It comes as no surprise, then, that organizers selected Michel de Broin’s sculpture of a giant disco ball, 7.5-meters in diameter, to hang above the festival’s hub at David Pecaut Square. Perhaps this glistening symbol of glamour and entertainment intentionally contradicts the arduous reality of being an artist and performer, perhaps not. Perhaps chief sponsor L’Oréal wanted to literalize what their products apparently do for your hair. In any event, presenting this complicated relationship between art and branded celebrity glamour is nothing new to consider, but is nonetheless appropriate when thinking about this fascinating, contradictory play.

Marina Abramovic, a.k.a. the “godmother of performance art”, is our central subject matter. As the title suggests, the play is based on Abramovic’s past experiences and traumas, but is translated into the highly theatrical vision of director Robert Wilson, whom she approached to realize the project. With an aesthetic that is at once minimal yet hyper-surreal, the play covers the narrative arc of Abramovic’s life – from her traumatic youth to her persistent adulthood questioning of what it means to be an artist. Although I was unfamiliar with Wilson, I immediately recognized his aesthetic. The high-contrast lighting, monochromatic painted bodies, bright backgrounds and perspective-distorting, minimal props have been picked up by many music videos and fashion shoots over the last two decades. It is exactly what comes to mind when you visualize the words: “Avant-garde theatre”.

Abramovic, on the other hand, comes from a completely opposite world. Her work is characteristically unadulterated and direct, existing in an intensely felt present. Since the early 70s, she’s been using her body in demanding, intense performances as a medium to test our physical and mental limits as humans. In the presence of an audience, for example, she would ingest un-prescribed medication and go into uncontrollable fits and seizures. She’s also taken the passive role, allowing viewers to manipulate her body with a table of objects ranging from feathers and honey to whips, knives and guns – allowing the audience to engage her in both modest and malicious ways, which they did.

In the last ten years, Abramovic has done an incredibly savvy job at drawing her career out of the relative underground of ‘performance art’ and into a larger public consciousness. In 2010 the Museum of Modern Art in New York staged an innovative and massively popular retrospective of Abramovic’s career entitled ‘The Artist is Present’, making her a bona fide celebrity-art-star. Young performers hand-picked by the artist re-enacted seminal past performances while Abramovic sat motionless at a table, inviting audience members to sit opposite and stare into her eyes for as long as they wanted. Hundreds queued overnight to stare into the depths of her still and mysterious eyes, often leaving exalted or in tears. Abramovic never moved during the museum’s opening hours – not once over the three-month, 700 plus hours of the performance. In her eyes, that of a stranger’s, viewers saw the inner depths of themselves.

In The Life and Death of Marina Abramovic, however, we engage with the artist in an entirely different way – a way shrouded in illusion, theatre and surrealism, a way that is opposite to the artist’s career-long practice of bare, visceral engagement. Instead, we are presented with a beautiful and terrifying trip into her inner psyche. A surreal world where performers emerge out of ceilings, clouds, trap doors and dark shadows, each painted in thick, white make-up, frequently pausing to gape their mouths at the audience. The bare presence of her work is replaced here by pure theatre – a marriage so extreme that it can only be considered intentional and strategic.

Depending on your taste, you can interpret this mix of Abramovic’s fiery personality with Wilson’s cool, nightmarish aesthetic as creatively productive or severely at odds. A die-hard Abramovic fan may recoil at the absurd costumes and the white pantomime makeup layered upon her, or rather, discover that they can learn more about what it is they’re looking for through its antithesis. Abramovic is perhaps so dedicated to the present that when she chooses to deal with the past, with memory, she willingly engages the hyper-surreal. Memory is, after all, a non-sequential, piecemeal ordering of the subjective – arguably, a fabrication of the real, a theatre of its own kind. Only in the present do we engage with the real. Everything else – the future, the past – is pure fantasy.

I wonder if this idea is lost on an audience who don’t want her fantasy past, but are there for her real-time celebrity presence instead. Dressed as her authoritarian mother, Abramovic enters the play about fifteen minutes in to gasps and whispers: “That’s her! That’s her!” And of course, at the play’s end, the theatre roars with exaggerated screams of applause. Projected documentation from her practice is perhaps used as an effort to highlight the contradictions between past and present, reality and fantasy, her work and Wilson’s. Ultimately, though, the films serve as a reminder of the differences between stage-actor and artist-performer – Abramovic being far more capable at the latter. One moment where she attempts to channel the singing voice of Marlene Dietrich seems out of place and confusing.

Despite Abramovic being the headlining star, it is the captivating Willem Dafoe who deserves credit for carrying the majority of the show. His wincing and crawling over the stage, often in long stream-of-consciousness monologues, is something to be witnessed. His absurd gestures and speech perfectly combine the macabre and the comedic in a way that could easily outdo Jack Nicholson’s or even Heath Ledger’s Joker. Musical director, composer, and performer, Antony Hegarty, also excels where Abramovic can’t, delivering a performance that is more serious than Dafoe’s, but nevertheless consistent with the evening’s tone of eerie beauty.

Wilson clearly desired an aesthetic that would encapsulate the terrifying and the striking – his own kind of sublime. No doubt, watching the result is an absolute pleasure. The compelling visuals, however, consume Abramovic’s intention to explore the disjointed and ethereal aspects of memory. In service of the director’s aesthetic, our artist/subject-matter is often placed in highly articulated, held poses; present but motionless and expressionless. In one scene she appears statuesque, mounted atop a horse, even her waving white flag frozen in time. While watching this, a line from her artist’s manifesto, a line that is also repeated several times in the performance, comes to mind: “An artist should not make themselves into an idol”. Unfortunately, while in the hands of Robert Wilson and Luminato, Abramovic becomes exactly that – an idol.