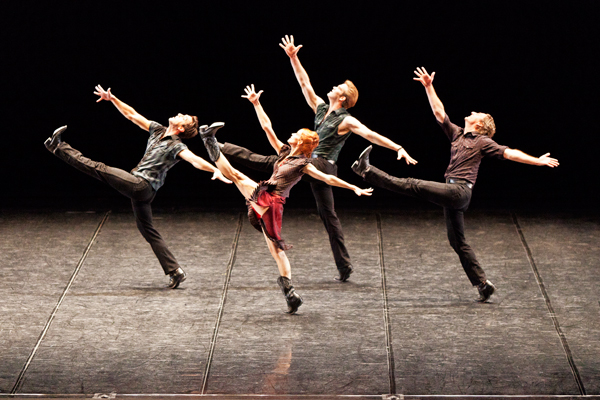 The final production of The National Ballet of Canada’s 2012/13 season is a mishmash of four seemingly unrelated short pieces wedged into two hours with two intermissions. I wouldn’t call any of the individual works masterpieces of any sort and the performances themselves are not the most memorable in National Ballet history but the assemblage has a decent number of standout moments within its strange assortment of disparate tones.

The first number is the least memorable- Jorma Elo’s Pur ti Miro, a speedy showcase of five partnerships featuring choreography that flits between classic and kitschy. First Soloist Brett van Sickle stands out here as does Skylar Campbell, a young Corps de Ballet member whose emotional and technical range predicts that he won’t be in the corps for long.

After the first intermission comes my favourite of the four ballets- No. 24, a brief 8-minute pas de deux choreographed by beloved principal Guillaume Cote and set to a fabulous Paganini piece played live onstage by the incomparable Benjamin Bowman, a violinist so thrilling in performance that I struggled to remind myself to watch the dancers instead of him. Despite the occasional cheesy moment, Cote’s choreography is pleasant and demanding, especially impressive in the capable hands of another Corps de Ballet member on the rise- the supremely likeable Brendan Saye. I found myself wondering why one would wait in line to see the much-maligned Man of Steel when a $30 DanceBreak ticket can buy you beautiful super-heroics from Clark Kent look-a-like Saye and his endlessly long limbs.

A brief post-24 pause brings us to the main billing- James Kudelka’s The Man in Black. Set to Johnny Cash recordings of songs mostly made famous by other artists (Lennon/McCartney’s “In My Life” and Gordon Lightfoot’s “If You Could Read My Mind” among them- both beautiful but both somewhat out of place), The Man in Black is set up as a ballet tribute to the American musical icon using cowboy boots and “country western dance styles”; the effect is a little bit silly and a lot confounding. The National Ballet’s infatuation with Kudelka has never made all that much sense to me but this is perhaps the most starkly strange piece of their marriage so far. Each Cash recording brings with it a new style of countrified sort-of-ballet, some more successful than others. Springsteen’s “Further On (Up The Road)” fares the best because of its strong narrative value and the at least semi-seriousness with which the choreographer approaches his visual imagery. The number that involves the four featured dancers prancing pony-like in strange daisy chain-esque formations, not so much. The Man in Black is, however, the perfect piece to showcase principal-in-waiting (aka First Soloist perennially cast in lead roles) McGee Maddox who, with his casual manner and utter masculinity, is the closest thing to a cowboy as can be found in classical dance. To the casual observer, the South Carolina-born, Houston-trained dancer could very well be a part-time cowboy, the cool ease with which he unironically delivers Kudelka’s goofy western steps and makes them sexy being by far the best thing about the brief ballet.

The final act is the Balanchine standard Theme and Variations. This ballet, from costumes to choreo, is as classic as the suite it’s set to, Tchaikovsky in G major. This works both for and against the 21-minute piece. In sparkly, colour-coordinated tutus, the Corps de Ballet and First Soloist Naoya Ebe dance prettily and pleasantly, pausing regularly for applause. It’s a traditional and stilted series of events that allows the audience unnecessary time to consider the fact that this is nothing they haven’t seen before. However, as the corps work becomes more complicated and the breathtaking Elena Lobsanova takes centre stage a bit more, Balanchine’s tribute to classical Russian ballet leaves behind the idea of being applause-hungry impressive and becomes more honestly moving, as though the famous work is sharing with the audience the very definition of classical ballet.

As contrasted with the over-modernized preceding piece, there is something lovely about this final short ballet with no hook to lean on, just the bones of the medium it defines.