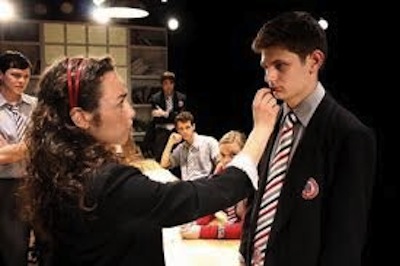 Zeitgeist Stage Company offers a treat in its most recent production of Punk Rock, a rarely-performed British drama by Simon Stephens. Performed in the intimate Plaza Black Box and using an alley-way set design with simple chairs and tables, the focus of this production is on the actors and their characters. With few exits and entrances, the actors are forced to stretch themselves to their breaking point onstage in some intense and emotionally demanding moments. Luckily, these young actors rise to the challenge with some performances exceeding expectations.

Set in a British secondary school, Punk Rock follows William Carisle, our plucky but not-quite-all-there protagonist, played by Phil Gillen, as he meets a newcomer, the alluring Lilly Cahill, played by Emily White. Gillen is handed one of the most challenging roles in the production, no small feat, and mostly meets the burdens of such an arduous task. However, at times, it feels like the role controls him, similar to running downhill; at one moment, Gillen is propelled by his own momentum and skill, but at other moments, the sheer velocity of running downhill seems too much for him, missing some key moments and retreating into some stale mannerisms. White is mostly consistent, though almost forgettable. In fact, if Gillen wasn’t so fascinated by her, I would question what made her so special to warrant the extensive stage time. I’m not sure whether this fault lies with the actor or the playwright, but, regardless, I felt that something was missing between Gillen and White that detracted from the story’s overall trajectory.

Luckily, some of the other characters delivered their roles with keen sense of chemistry and purpose. James Fay’s Bennett Francis is both frightening and compelling, a malicious leader who longs for approval through jokes and bullying. Fay hits all of the right moments, drawing out Bennett’s insecurity and vulnerability even while destroying the people he loves around him. His sidekick, Nicholas Chatman, played with charm by Diego Buscaglia, is silent and lost, and Buscaglia finds the right moments to highlight his torn alliance between his friend and what’s right. Alex Levy’s Chadwick Meade is strongest in his sullen silences, and his outburst seems both startling and inappropriate. Something never quite clicks in the end for me with Levy’s performance, but he displays talent as a young performer with a difficult and demanding role.

Two of the biggest successes, surprisingly, are by Alana Osborn-Lief as Tanya Gleason and Alexandra Marie Harrington as Cissy Franks. Both young women are stars to keep an eye on for future performances, as they displayed quality moments. Harrington is both aloof and broken, hitting the perfect dichotomy of a young woman who relies on approval and acceptance while sacrificing her own confidence. Osborn-Lief reminds us all of the struggle to stand up for your beliefs and the sheer magnitude of peer pressure. Osborn-Lief does a superb job of tackling her many overwhelming moments with the perfect emotional and physical vulnerability. These moments made the play for me.

The director, David Miller, is no novice, and he expertly coaches these young actors with difficult material and high expectations. His wisdom shines through each of their performances, and the organic nature of their rehearsal process shows in each actor’s ability to adapt and respond to his or her fellow castmates. The level of trust established by Miller is showcased in each scene as the actors tackle the material with confidence. I need to mention Victor Shopov, even though I believe he was tossed into a thankless role. Shopov commands his scenes with the raise of an eyebrow, though some of these movements were lost because of the staging. Shopov deserves most stage-time and more of a character from which to work, but I couldn’t imagine a better actor filling the role of Doctor Richard Harvey. While nowhere near memorable, Shopov manages to showcase his acting abilities with his limited material.

The strength of Punk Rock lies in the story. The characters, at times, may feel like mere vehicles for larger conversations and controversy. Luckily, most of these actors are up to the challenge and summon some extraordinary talent. This strength exceeds expectations and these actors deserve an audience to share their story and passion. Zeitgeist Stage Company’s Punk Rock runs at the Plaza Black Box at the Boston Center for the Arts only until May 25. Don’t miss this inspiring and thought-provoking story!