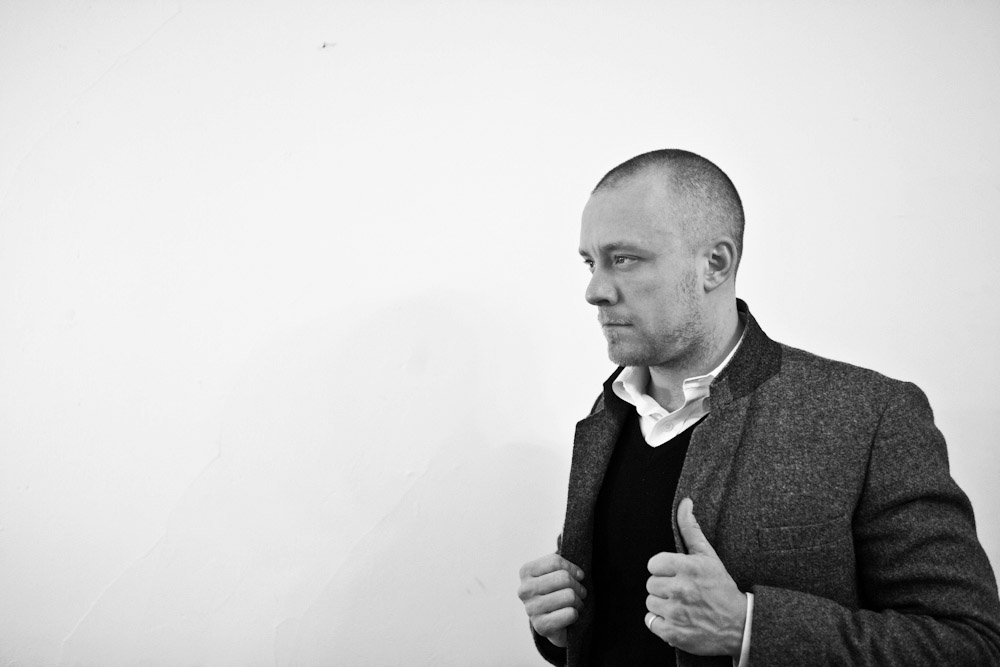 The architect-designer behind one of the most complicated theatrical undertakings of the year, Jay Pooley constructed an entire 19th century town in Victoria Memorial Park for Single Thread Productions’ The Loyalists, a site-specific, audience-inclusive depiction of The Battle of York.

The thoughtful Best Designer for a Regional Production nominee took a break from working on the major renovations at Toronto landmark The Drake Hotel to talk to us about designing such a tough show.

Can you remember the first theatre production you ever saw?
It was a short play for children at the McManus Theatre (which is in the Grand Theatre in London, Ontario) and it blew my mind. I was 5 and my mother took me. It was about monsters under the bed. As a kid I spent a long time trying to figure out the mechanics of the monster’s “tentacles” which turned out to be spay-painted flexible dryer venting. My relationship with the theatre hasn’t changed a lot since that.

You’re an architect by trade, how did your work as a theatre designer come about?
Well, I’m in love with the magic of the spaces around us. They don’t always have to be real spaces, they can also be make-believe places. Theatre was always a way to fall into those imaginary places and make them real.

How does your architectural background set you apart from other theatre designers?
I’m good at math. No – just joking, I’m awful at math.

I think that if you engage in one specific mode of study you’re going to learn one specific way of working. I started my theatre career fifteen years ago as an assistant stage manager for the great Maggie Palmer and since then I’ve worked with sets and I’ve also worked with buildings. Buildings are places where we celebrate our lives and sets are the places where we re-tell the stories. I’ve never liked the idea of being an exclusive part of one crowd – be it architect or theatre designer. The in-crowd always does what’s in-fashion and that’s not always what we need to feel at the moment.

What’s your favourite production you’ve ever worked on?
I really enjoyed the first show I did with Joe Dinicol and Benny Blaise for Red One Theatre – Proof. Joe’s one of my oldest friends, we grew up together in Stratford, Ontario. We can fight like friends and that’s a really special thing to have. We built the back of a house with garbage and shingled it with 1500 cardboard shingles we got from liquor store boxes.

Do you have any dream projects?
I’d love to work with The Wooster Group. They’re good enough that they can do a show with no set, tech or costumes and it would still be magic. But the way that they interpret production design gives it so much. They’re brave and I like that.

How did you first get involved with Single Thread?
I think it was through a Craigslist personal that Alex Dault [Single Thread’s Associate Artistic Director] answered. Or, no wait that didn’t happen at all. Alex saw Boeing-Boeing, a show I did for Rogue Theatre, which is run by Brooke Morgan and Diana Bentley – both of those girls are real pros. In that show we made the theatre the stage. So you walked into the main character’s apartment and had a seat in his living room.

What was the most intriguing thing about the project for you when you signed on?
From the very first meeting writer/producer Alex Dault really had his act together. He brought a stack of very clear and concise historical research – which for a production like this, having a clear context and method of finding your way through the script when things get muddy, is critical.

Walk me through the creation process for the Loyalists set.
I took the work as a whole and slowly broke it down into workable components. In any work I do, I start with a few basic questions: what is the story about? What does the story feel like and how can I serve the players to tell the story?

Was the site-specific nature of the piece an extra challenge?
Yes. Victoria Memorial Square is a military cemetery in addition to being a public park that is regularly patrolled by drunk people and small dogs. We had to create a set that was permanent but also maintained a dreamlike, whimsical quality. In doing so we worked closely with the geography of the park so not to interfere with the memorials or landscape. These challenges offered a number of opportunities in how we staged certain parts of the show and, subsequently, how we re-presented the park back to the public.

With audience interaction as such a major factor, was that a consideration for you at all in terms of setting up the set to be unpredictably trampled on?
Absolutely – I personally climbed each of the structures to test their vigor.

The story called for multiple locations. Did you have a favourite? Was one particularly challenging to create?
My favorite location was the hospital. It was the only instance that we introduced a fabric that diverted from the mostly dark and robust colour palate. Stretched across the wandering wooden frames it created a contrast and likeness to traditional imagery that we associate with the nursing profession.

The docks were a challenge and I don’t believe that I completely nailed it the way I wanted to. It was my intent to create an immersive experience by way of introducing a semi-transparent material. Through this I was hoping to re-create the experience of vastness one feels while standing at the edge of the ocean.

What are you doing now/ what’s your next project?
Right now I’m busy heading up the re-design of major spaces in the Drake Hotel. It’s good to be back in buildings for a bit – they’re just like plays except no one has a script yet.

Do you have anything you’d like to add?
Thanks a lot for having me. All the best.