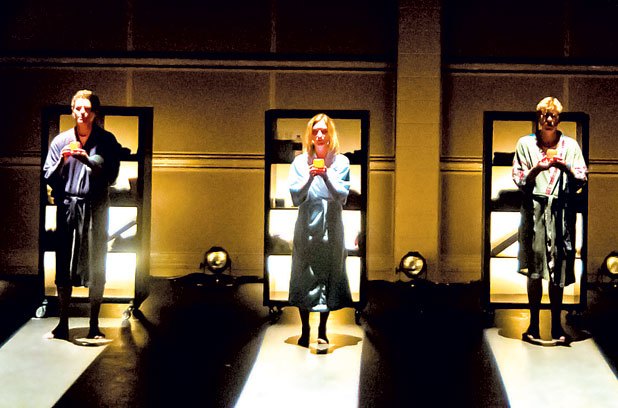 I Like You, but You’re Not Perfect, Now Change

Angelwalk Theatre’s current production of the relationship song cycle I Love You, You’re Perfect, Now Change is a diverting and likable trifle of a show. It’s fun and good-natured with a user-friendly structure that easily hooks the attention span-challenged but leaves those of us who crave a good arc feeling a little short-shrifted since the throughlines that link the disparate characters are more superficial than thematic.

The problems in Joe DiPietro’s book are worsening with age as the dating landscape morphs immeasurably. The second act, which deals more with marriage and children, stands up a little better in 2013 than the first act’s oldschool tales of first date horror and the differences between genders. The piece is prosaically hetero in the vein of 80s rom-coms, making little room for different types of men and women and relationships even within its two-white-men-and-two-white-women setup. Director Evan Tsitsias thoughtfully thinks to update “On the Highway of Love” to incorporate at least one homosexual relationship story into the evening but the characters themselves remain fairly unsubstantiated across the various sketches. The director makes a pronounced point of changing all the settings to modern day Toronto, but that only makes the problems of modernity worse. But Tsitsias knows his audience and he’s created a production that people will like. They’ll like it a lot. Even I liked I Love You, You’re Perfect, Now Change, and I’m a critic whose job it is to point out how irrelevant the show is.

The stars of the show, for me, are actually Scott Christian and Tamara Hrycak who form an orchestra of two, filling out the not-so-sparse score with just a keyboard and violin. Unless you make a point of looking upstage right where Christian and Hrycak are seated, it’s easy to forget that they’re playing all on their own.

The singers are good too. Married co-producers Christopher Alan Gray and Leslie Kay join one actor who is a tad too old for most of the roles in the text (Dean Hollin) and one who is a tad too young (Alison O’Neill) to form the ensemble of four who pair and re-pair and re-pair to play out brief, amusing, and somewhat cliché’d romantic scenarios. Gray and O’Neill are the most consistently engaging performers of the bunch as well as the stronger singers. O’Neill, though perhaps a little too polished to convey much vulnerability, is an apt comedienne and steals many a scene with her ingénue-y brightness, suggesting an impressive and distinctly marketable potential in the young actress. Despite his wife’s presence, Gray and his melodic tenor are most often paired with O’Neill, combining for their best comedic effect in “Tear Jerk”, somehow both a dated portrait of masculinity and an on-point deconstruction of obnoxious male behaviour that sadly persists. They reunite at the end of the piece for a rare emotional highpoint- “ I Can Live With That”, which sees Gray and O’Neill agreeing to a little companionship in their old age.

I say the emotional highpoints are rare because the show, while high on laughs and relatability, is a little bit vacant. There’s a silly song about waiting for a boy to call (despite how irrelevant that concept is in a world of texting and facebook) and plenty about the perils of meeting people and getting along once you’ve  met them, but not as much honest human emotion as I wanted. The only shining moment of true exception is “Shouldn’t I Be Less In Love With You”, a ballad sung beautifully by the heretofore mildly amusing Hollin that is wonderfully both more sentimental and less obvious than the other numbers. With that number, Hollin becomes the standout dramatic actor of the bunch and brings the production’s vocal batting average up to .750 (Kay, though a standout in numbers like “The Baby Song”, is the only cast member who struggles with some of her notes).

I Love You, You’re Perfect, Now Change is not a show I would recommend to a theatre regular, unless they’re in need of some amusing sweetness to balance out an onslaught of heavy drama (perhaps they attended all three shows in The COC’s spring season and need to escape the dull ache The March of the Bloody Nightgowns left behind). It’s really a show for people who don’t see a lot of shows. It doesn’t take much of an attention span or a head for detail or interpretation. All it takes is a willingness to accept the piece at its entertaining face value, because that’s all there really is.