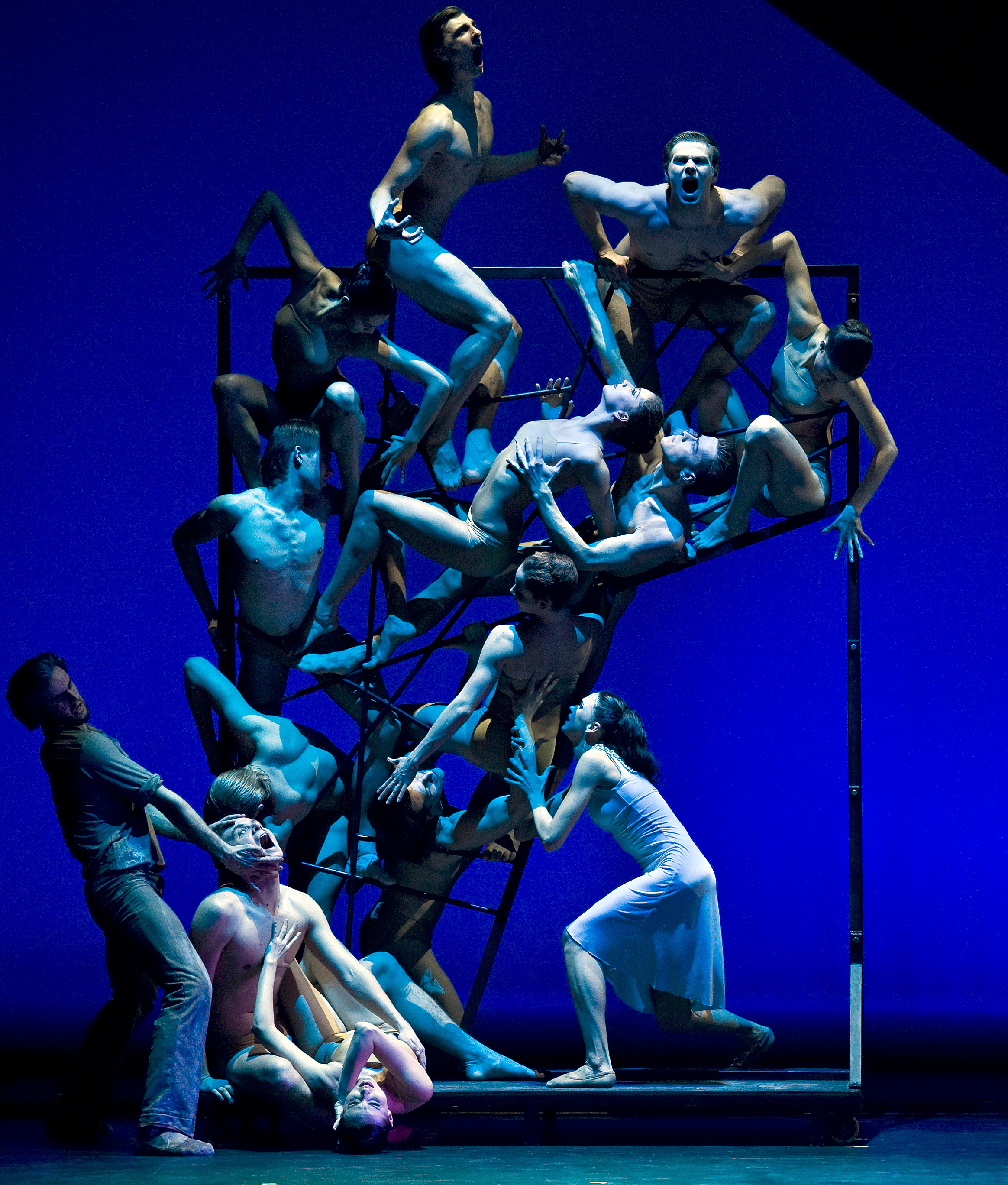 Last night I saw the premiere of the Eifman Ballet of St. Petersburg’s production Rodin at the Sony Centre for the Performing Arts. The show is running for a mere three days, May 23rd through 25th, so happily packed the house with an exceptionally large percentage of Slavic-background patrons. The heavily accented murmurs were just an introductory example of how delightfully un-North American the Eifman Ballet is.

The dancers boast a nuanced talent and skill that is rare if non-existent in ballet dancers in Toronto. Their technique is undeniably so focused and tuned, that a fully stretched foot from the principle dancer playing the role of Camilla makes its own statement upon the stage. The central two women work and weave their bodies in the most incredible ways, and the flexibility, articulation, and manipulation of their hips and lower backs is astounding. It may not sound like much to be swept away by a few vertebra, but I have never seen such wonderful movement, stretching, and twisting of the lower spine. And I’ve studied Graham technique.

The exquisite technical ability of every artist onstage is met with equal emotional commitment. Oleg Gabyshev, in the title role of Rodin, brings such a wild and enrapturing energy to the stage, yet manages to rein it in for ultimate precision. Perfection onstage is not something I am necessarily interested in, but his flawless performance is buoyed up by his raw desires and emotions laid bare on the floor. I could feel his yearning for his partner at the beginning of the first act, when the characters are introduced in a flashback, as his hands desperately trace and grope the lines and crevasses of her body, portraying his need to feel and mould and sculpt and be as close to her as possible. Later in the scene, she stands upon a circular table, center stage, and peels her dress up and off her body exposing herself, vulnerable and nude, while the opening notes of Debussy’s “Clair de Lune” trickle into the air. With difficulty, I stopped tears from springing to my eyes, but could not rein in a gasp of delight at the pure physical beauty of the ballet, the artists, and the atmosphere.

Understandably, the human body in all its naked glory is a significant theme of the ballet, a piece based on an internationally known sculptor. While there is never full nudity on the stage (there were children in the audience after all), flesh-coloured underthings are used with great skill to emphasize lines of the body and heighten the sculptural element of the form. Throughout the ballet, bodies are manipulated to create living replicas of Auguste Rodin’s sculptures, ranging in all size and scale. The creation and presentation of the living sculptures stand out in the ballet like pinprick moments of brilliant light, but they never grow too large. Bodies are covered with canvases, scarves, stretched and pulled. However, each moment is cut off too short, as if Artistic Director and choreographer Boris Eifman, in a moment of vanity or pride, is showing off to the audience what his dancers can do without backing it with more development.

The technical ability of all the Eifman dancers, even the Corps de Ballet, is evident, but the momentum of the piece as a whole is often lost in the group numbers. The crisp clarity of storyline segments with the principle dancers stands in stark difference to the often-muddled composition of group scenes like the asylum or the grape festival. The lack of a live orchestra also takes away some passion and energy from the ballet. Eifman does incorporate extra mixing-board media for great results, but the music is often not loud enough to inject its own energy into the theatre. The dancers are certainly able to stand on their own, but I found myself longing for the trembling and electric feeling of live musicians. In a modern ballet with an emphasis on theatricality over tradition,  recorded sounds could have been incorporated with an orchestra to create a stunning soundscape.

Through his choreography, however, Eifman does embody modernity with his ballet, highlighting the psychological drama of the inner self, the inner artist. Physically revealing oneself onstage takes bravery, but undressing the mind takes more courage than many choreographers hold. Both Eifman and his dancers reveal an inner turmoil, the seed of darkness that grows or festers in every artist. Eifman is also not afraid to delve into the world of modern dance, allowing and encouraging his dancers to express themselves in primal or animalistic ways with inversion of movements and joints, referencing Martha Graham and Vaslav Nijinsky in his choreography. Rodin takes a wonderful and interesting place in the history of dance, completely embodying contemporary trends to include more visual stimuli (of the multimedia variety), and honesty of movement.

A final criticism I have of the production is the written programme itself. What a bizarre element to cause me displeasure, but I found the editing (or lack thereof) an annoyance, and there is no clear casting list to allow me to credit individual dancers. The synopsis, as I sat in the pre-curtain hubbub of the theatre, suggested problems in the clarity of the plot, but I actually found the jumps between past and present, memory and reality, to be apparent on the stage. What I thought would be muddled and unclear in the plot was developed into comprehensive continuity through the artists of the Eifman Ballet.

With every show one attends, there are elements that please and elements that disappoint. While it would be easy to get caught up in the details of the Eifman Ballet’s performance of Rodin that irked me, I am far more inclined to lavish praise on the production. The work of manipulating the human body in space is unparalleled, and the overlying beauty of the production will stay with me for a long time to come. If at all possible, I would strongly recommend getting down to the Sony Centre to see the Eifman Ballet of St. Petersburg perform Rodin, and be prepared to gasp, sigh, clap, laugh, and feel goosebumps crawling along your body for the entire duration of the show.