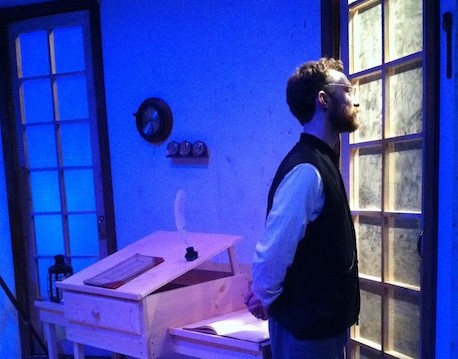 The Seabirds by William Orem

When this one came across the My Theatre desk, I snapped it up based solely on the fact that I saw Argos Productions‘ Wandaleria last year, and was incredibly impressed by their work. I have to say, I was surprised by The Seabirds. After the first few minutes, I was expecting a pleasant, if slightly hokey, piece of Americana involving a lighthouse keeper during the Civil War. What I got, though, was a deep, intense psychological piece about two very different, dynamic characters.

I don’t want to go too far into the plot, because it would be so much better if you went and experienced it yourself. I will say that the play revolves around two characters, Shadfield (David Lutheran) and Leance (Brendan Mulhern) who slowly learn what each other are really like, and about what in their lives has led them to the situation that they have found themselves in. The story is slowly and carefully unfolded, creating what I certainly consider to be a masterfully crafted story. That said, I do think that the first half of the play is the stronger half, and it is a bit wordy, but it is very well written, with an excellent blend of wit and gravitas that rises to the weighty themes that the show tackles. It does, at times, seem like the script is trying to take on too many social issues, making it a little confusing and hard to follow. However, when it swings back to the two characters’ personal lives, it sharpens greatly and becomes a very good show overall.

The actors are phenomenal. Mulhern is a personal favorite of mine, with his incredible physicality and the ease with which he portrays the intensely complex emotions of his character. He is complemented perfectly by Lutheran, who plays the exceptionally difficult character of Shadfield with a depth and precision that I couldn’t help but admire. He expertly toes the line between being sweet and creepy, setting the play up for a climax that had me quite literally on the edge of my seat. If I ever have the luck of seeing these two actors playing together again, I’ll have to jump at the opportunity, because their chemistry is so spectacular that they make the perfect two man cast.

The technical aspects of the show are equally impressive. Everything works together brilliantly, from the sounds of the sea that surround the lighthouse, to the impressively intricate and beautiful set, and the outstanding lighting design which perfectly replicates the feel of the light from the lighthouse itself. All of these technical aspects come together to support the actors in a way that makes every piece of set decoration and every lighting and sound cue part of a rich and astounding world, with nothing that doesn’t fit.  Some of the sound cues (I don’t really want to say what, at the risk of spoiling part of the plot) are significantly less impressive than others, but that’s one instance in a show that is otherwise perfectly put together.

All in all, I cannot recommend The Seabirds strongly enough. I can quite happily say that my opinion of Argos Productions remains as high as it ever has been, and I am dearly looking forward to their next set of shows, and for William Orem’s play to continue on to even larger venues in the future, because it certainly deserves it.

More information about Argos Productions, including ticketing information for The Seabirds can be found at http://www.argosproductions.com/