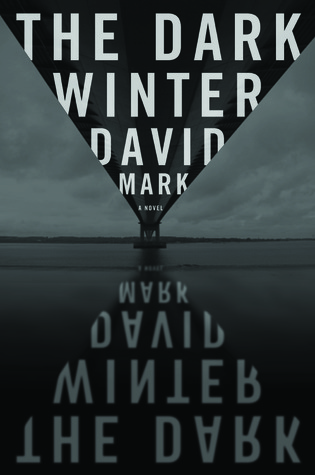 David Mark’s debut, The Dark Winter, is a stout, hardy, character-driven mystery that treats what is an introductory novel as a satisfying, whole, stand-alone work, complete with office politics, fleshy back story, and a series of seemingly random murders—as well as an interesting question posed concerning mercy and justice.

The Dark Winter features the mysterious and disgraced detective Aector McAvoy as its anchor, and tracks his unpopular, complicated, and messy journey through a series of crimes in the northern British town of Hull that pit McAvoy against a mirror of himself, as he becomes both a victim and a floundering yet dogged detective.

The book begins with an old boy—Fred Stein—recounting his miraculous escape from a deadly storm to a documentary crew. He talks about the calm before the storm—being able to hear the boots squelching and squealing on the deck. He gets choked up and leaves for a moment. Stein is meant to talk some more—is meant to sink a memorial wreath over the spot where the ship that took everyone else from his crew went down. But when he disappears after going on deck from a breath of fresh air, people assume an elaborate suicide. When McAvoy’s asked to console the politically relevant sister of the dead Stein, after the spectacularly public murder of a 15-year-old altar girl (in the middle of church, no less), McAvoy’s gut tugs him to investigate.

And I love following Aector. Mark does a good job with the mystery (it’s not the first person you talk to, it’s not the butler, etc.) but his true triumph is the characters—particularly McAvoy and Pharaoh.

Aector follows one of my favorite archetypes: the too-good-for-his-own-good Natural Policeman. The conflicted, gritty Good Cop. You know—they don’t bother much with office politics, they aren’t always great at following the rules, they often go rogue—investigating things that people tell them not to bother with, or that can’t be made to stick. Usually gruff, resembles a North American Grizzly bear, heart of gold and burning sense of Justice (yes, with a capitol J. because it’s the philosopher’s ideal, ultimate Justice. Often directly contrasted with the little j justice that happens in the courts).  Vigilis optimus. You know, one of my favorite character types (right next to stoic Noble Romans and Loyal Servants). If you don’t’ like or have some affection for this type, I don’t really understand you.

So anyway, Aector was meant for me in that he is definitely a member of that family. But he’s also great new spin on an old favorite. Aector is the Good Cop. But he’s also got some elements of Charlie Brown and a sword and sorcery Berserker. Aector cares about three things in the world: Justice, his wife, Roisin, and his son, Fin. And in the service of those things, he can find spectacular strength and rage (he’s also built like a Scottish mountain, so that helps). But when we first meet McAvoy, he’s this disgraced, office-bound cop known mostly for creating a new database, and having an old wound related to a top-secret, closed file with big HR ramifications. And he lets the killer get away. As the book wears on and he has multiple close brushes with the serial killer, we realized that McAvoy is a bit like Schultz’s favorite blockhead—almost always missing the football. Throughout the novel we understand more and more about McAvoy—he’s not a great talker, he can be painfully shy, he feels both proud and awkward in the designer clothes his wife picks out for him, and he is painfully aware of his own attempts (and perceived failures) at heroism.

Mark does a pretty spectacular job with most of the characters—there are a few minor characters that primarily serve their function (introducing x or revealing y, etc), but for the Mark’s focal characters are complicated, nuanced, and fascinating. My particular favorite is Trish Pharaoh. My only complaint is Roisin. Roisin’s too idealized for my taste—by which I mean she bugs me. We get a couple of hints that she’s not quite perfect, but beyond that she’s essentially a fantasy of a wife. She unfailingly considers McAvoy a hero, falls in love with him after he saves her (literally), and generally stays at home making him food, I think. Boring.

But Trish Pharaoh. She’s great. She’s in charge, and she wields her authority well, she’s got good intentions, good instincts, but she also has a head for the office politics—she’s not expert at it (especially when McAvoy’s unintentionally mucking things up and pulling rugs out from under her feet), but she’s good—and most of all, when she speaks, you can hear her. There is one passage in particular in which she reams out McAvoy for keeping her in the dark, for following a hunch, for endangering himself and a fellow officer—and it’s so good you can hear it ringing in your ears. You understand her sense of humor. No one on this earth is as tightly wound as McAvoy—and I mean that affectionately—but Pharaoh likes to drink and she likes her cigars and she treats the officers in her care like unruly children, friends, and subordinates in turn. She is sarcastic and biting and wonderful. And as much as I love Pharaoh alone, it’s in relation to McAvoy that she’s really her best.

Their relationship and McAvoy’s raw self-doubt are my two favorite pieces of the book.

As for the mystery—we have mentioned before that I’m not usually much for mysteries and thrillers. Here’s the rule: If there isn’t an element to the novel that will make me want to read it again, then I don’t really want to read it in the first place. And mysteries/thrillers traditionally rely on twists of the plot, the way the villain appears out of nowhere, in the guise of a seemingly innocent priest (or whatever) for their draw. Once I know the plot twists, there isn’t a whole lot to go back for. Those books have essentially zero re-read value for me.

Thankfully, The Dark Winter is not one of those books.

The mystery is present, it is intriguing (the killer isn’t the second person they talk to), it’s psychological (not, like the most psychologically complex thing I’ve read, but it has to do with zealotry, divine Justice, equity in miracles, mercy, and one man defying his stars, etc. so… all of my favorite things, essentially), the killer and McAvoy are nearly kindred spirits, and most importantly, the book is not about the mystery.

The book revolves around McAvoy and his growth—from victim to investigator, from disgraced to trusted cop, from data-guru to fighter. The murders are baptism by fire for McAvoy, but they are merely the sacrament. He is the focus.

I will read (and enjoy) The Dark Winter again.