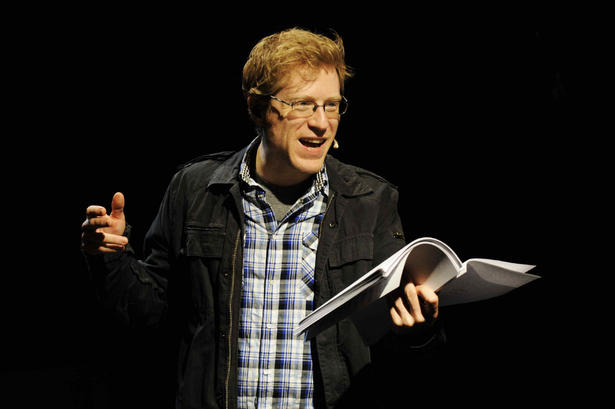 Anthony Rapp’s Without You

I read the original version of Without You when it was first released in 2006. It was a lovely book, full of emotional memories and revealing frankness nestled among the awkward prose and insider-y Renthead bait. I, like almost every theatre-loving girl of my generation, have a very special place in my heart for Rent and its original cast. Anthony Rapp, in particular, has become a sort of Rent ambassador, almost the show’s spokesperson in a way. A lot of that role just sort of fell on him- because he was the most famous cast-member going in thanks to movies like Dazed & Confused, because he was not only in the original off-broadway cast but in the very first workshop, because his character Mark kicks off the show and serves as not only the narrator but the audience’s way into the story- and some comes from the way Rapp has tied his life to Rent‘s since 1994 by writing the memoir, returning to do the film (with most of the rest of the original cast) then the tour (with just Adam Pascal), then finally by turning his memoir into a one-man show.There’s a certain cynical profitization to all of that, just as there is a certain desperation, but, having read the book and now seen the show, what I get more a sense of is Rapp’s reverence- for Rent, for its late creator Jonathan Larson, for his mother whose story runs parallel to Larson’s to make up the real “you” in Without You. I think Anthony Rapp embraces being Rent‘s ambassador, not just because it’s his one big claim to fame, and not just because he can live off the profits for decades, I think he thinks it’s important and helpful that somebody keep the show alive, and letting go of it- the show that made his career and helped him through the worst times of his life- would just be too hard.

At 41, Rapp has most of the quirky energy and all of the approachable sweetness he had 15 years ago. His singing voice, never the strongest in the Rent cast, has weakened with time but starts to recapture some of its trademark expressiveness as he gets warmed up. Opening night had sound issues off the bat and the original songs are well worth nitpicking (“Wild Bill” is inaudible, most are just not very clever) but generally Without You works far better as a stage show than it did on paper (where it worked fine). The reason for that comes down to two things: Anthony Rapp and Jonathan Larson.

If you like Rent, you like Anthony Rapp; you just do. Because of Larson’s death the night of his masterpiece’s final dress rehearsal, the original Rent cast possesses the unique magic of being the only people to have worked with the writer on the intensely personal and now-iconic characters. No matter how brilliantly Tracie Thoms was able to fill Joanne’s shoes (incredibly brilliantly), Fredi Walker will always have that legacy of being Jonathan’s only Joanne. This effect doubles for the actors who also appeared in the film version (everyone except Walker and Daphne Rubin-Vega) because, while it far from captures how special the stage version is, there are lots of people for whom that’s the only Rent they’ll ever see. Those original performances are- more than any in musical theatre history save perhaps Colm Wilkinson as Jean Valjean- intrinsically linked with the characters and to love Rent is to love those actors, none more so than Anthony Rapp, the man who literally guides you through your Rent experience from “December 24th, 9pm, Eastern Standard Time” on. All that is to say that, to a Rent fan, Anthony Rapp is a rock star and therefore having him on stage in front of you actually singing the songs you know by heart from that Original Broadway Cast Recording is thrilling, even if it’s not technically all that impressive (he’s not Jesse L. Martin, you’re not going to be blown away by his musical theatre prowess, but Collins isn’t as fundamentally “Rent” as Mark so I honestly wouldn’t request the trade).

If you do not care that he is Anthony Rapp, you probably also don’t care that the songs in the show (at least the Larson ones) are so massively important to the theatrical landscape; you definitely don’t have the reverence that makes most of the theatre tear up when the opening cadence of “Seasons of Love” is first played, and you are pretty much guaranteed to roll your eyes at a story about Larson telling someone at a party that he is “the future of musical theatre”. He was the future of musical theatre in 1994. It’s 2012, the future is here, and it’s got Larson’s fingerprints all over it. But if for some reason you don’t believe that. If you are like the National Post’s Robert Cushman, who feels the need to point out that Larson’s score for Tick Tick Boom is more musically sophisticated than Rent‘s while mislabeling “What You Own” as the opening number and asserting that “focus and structure” are the fundamental components of “art”, then I’m sure you will get the bare minimum out of Without You and you should really just go home right now. I’m not saying that Without You as a standalone piece is anywhere near as important or moving as Rent. In fact, I was shocked that many of the critics liked it as much as they did (Ouzounian flipped for it, Nestruck claimed to be moved despite being that annoying breed, a self-described “Rent skeptic”), because what I felt for Without You was inextricably tied to my love of Rent.

Completely objectively, Without You is entertaining, decently structured and appropriately moving as a tale of loss and grief. If you take the Rent out of it, it’s still an interesting story of how one man found his way through the loss of a friend/inspiration and the loss of his beloved mother within a few months. It’s not bad at all. But what it actually is is a companion piece to Rent and that’s what makes it special. If you fundamentally think Rent is stupid- and there’s a shocking number of people who honestly do- then you’re not going to be able to tap into what Rapp is trying to say about the grieving process and the role art plays in it, because it’s all about Rent’s philosophy. Yes, Rent fans can appreciate how huge a tragedy losing Larson was for theatre, not just for the people who knew him, and Rent fans can appreciate the backstage stories and hear more in Rapp’s rendition of “Without You” than just his remembrance of singing it at his mother’s memorial, but what makes Without You accessible and appreciable to Rent fans and maybe less to those who still can’t wrap their head around the musical is the show’s philosophy. That “no day but today” attitude, the ensemble effect, the message of hope, the sense of worldwide community that Rent has fostered- that’s all a part of Rapp’s Without You journey of getting through his grief. Rent is one of those shows that is so special to people that it has literally saved the lives of some who are going through what the characters go through- love, loss, addiction, disease, the dissolution of friendship, artistic hopelessness, poverty, grief. I think the point of Without You isn’t to teach people that Rent is awesome (which is true) and Jonathan Larson was a tragic genius (also true) and Anthony Rapp is an amazing performer (only sort of true). I think the point is to show Rent fans that as affected as they’ve been by the show, as much as they’ve been able to use it as a form of its own “Life Support” or “Friends in Deed” (the real organization that figures prominently in Without You, on which Rent‘s Life Support was based), it did the same for the people who helped bring it to life.