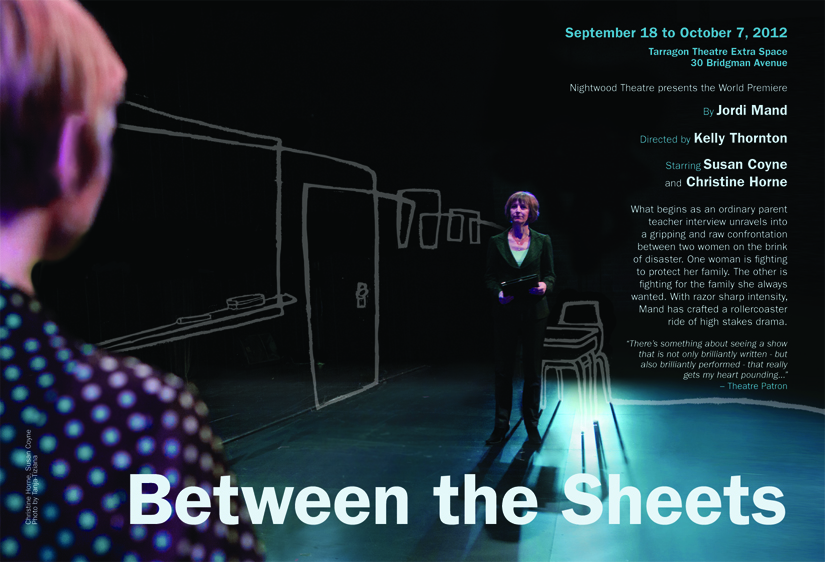 A Family Show – for Adults: Between the Sheets

I’ve always liked to believe you can tell a fine play by its title.  In this case, playwright Jordi Mand has ingeniously chosen a seemingly ordinary one which, in actuality, alludes to the electrifying secret that propels the story forward in this head-to-head dispute between Marion (Susan Coyne) and Teresa (Christine Horne) about what really goes on there – beneath the sheets.

I went into Between the Sheets doubting if I would be able to relate to the story as a young unmarried male.  But as I looked at the incredibly detailed set design (Kelly Wolf) in the intimate Extra Space at the Tarragon, I knew that – aside from the title – the bar had already been set high for a great show.  We have all been students at some point or another in our lives, and we have all been part of delicate relationships, of some form or another.  I felt completely transported back to my own grade three classroom, complete with multi-coloured duotangs, equally colourful alphabet display, a PA system, team points tracked on a chalkboard, and a large clock above it.  But the clock in this show is more like a ticking time bomb ready to explode as the lives of Marion and Teresa are exposed to us.  The real sound of the clock, in fact, grounded the entire show from start to finish.  It is within this most contentious hour that Marion, first, shows up late for parent-teacher interviews, with a vengeance, slowly revealing all she knows about her husband’s little affair with her son Alex’s teacher, as the discussion between this duo turns into a ping-pong match ending with both characters defeated, and the horrifically loud sound of the bell.

Mand has written a play packed with details, issues and themes ranging from gender roles to betrayal to women’s health, delivering us one of the most well written and “fresh” pieces of theatre in a long time.  Having only began development in 2010 as part of Nightwood’s emerging writer’s unit and workshopped the following year, Mand writes with the skill of a veteran.  Between the Sheets is one of several scripts appearing on Toronto stages this season which make reference to internet services and the role they play in relationships.  But while plays often make humorous reference to things like online dating, here we learn a fatal lesson on managing online accounts.  It is her husband’s unclosed message account that leads Marion to easily track the seductive email chains exchanged between him and Teresa.  However, this show is much more than dramatic spit-fire between two women.  It’s about complex family dynamics that affect each and every one of us in some way, and that’s what makes this a family show, notwithstanding the nasty words tossed at Teresa by a power-driven Marion, and the heated debate around infidelity.  In many ways, it’s about taking responsibility for your actions before it’s too late.

You see, one minute you want to side with Marion whose husband has been cheating on her, then the next minute you realize what an absent mother and wife she has been, making you want to side with Teresa.  Then, when Teresa seems completely naive and nonchalant about the whole thing, you want to, once again, join Marion’s battle.  But, then, we discover the reason why Teresa keeps saying “it’s not what you think”: she is not the young sex-driven bombshell that Marion insists she is: she can’t have children, an illness and surgery left her unwilling to be touched at all.  The tables are turned.  And Marion seems to gradually ease up, feeling not only sympathetic, but empathizing with Teresa’s sense of emptiness due to having had several miscarriages before Alex was born.  It is a real treat to see these multi-award winning veterans of the stage in real tour-de-force style, never once losing focus or skipping a beat.  They deliver their lines with utmost fluidity as if the scenes full to the brink with fears, pain, and longing were really unfolding in front of us.  So often in live theatre it is questionable who we are as an audience.  But here, we almost become the support staff eavesdropping down the hall or the passerby who has heard some ruckus outside the window.  What makes this narrative unique is the plot twist which comes so late after the climax.  Marion has already done the unimaginable with those emails that will likely cause poor Teresa her job.  At the heart of it all is a child who we never see or hear on stage.  Though he appears to have many caring supportive individuals in his life, will they ever be able to sort out their own problems so as to keep his best interests in view?  This is one of the questions this play bravely asks.

Excellent writing and design bond actors and audience together in a gripping and exciting moment of theatre, as it should be.  If this show is any indication of Nightwood Theatre’s upcoming season then that’s reason to be excited.

Between the Sheets plays at the Tarragon Theatre Extra Space until October 7, 2012.