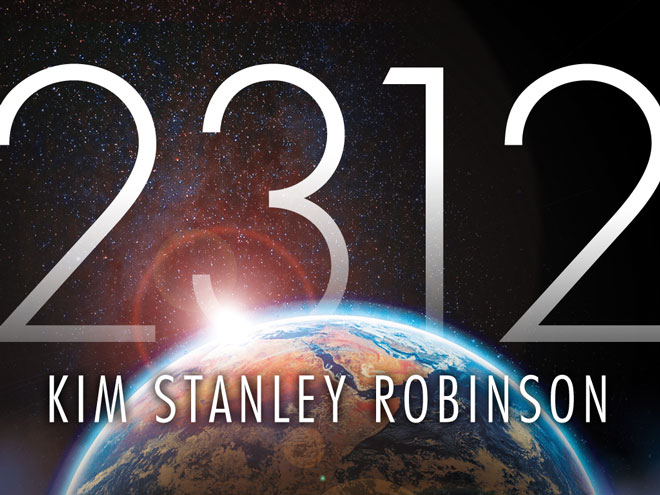 2312 is a futuristic exploration of human expansion into the rest of the solar system, and focuses on Swan Er Hong (an artist from colonized Mercury), and her attempts to unravel the weird events surrounding and immediately following her grandmother’s death. This book is also a whole lot more than that.

2312 has some of the best world building I’ve read since Harry Potter (and if anyone even thinks for a second that that wasn’t a compliment of the highest order, think of just the CANDY in the HPverse. Then remember how JKR devoted that kind of attention to everything in the world. Right. Thank you). So anyway, the world building in this is fantastic. Robinson covers the scientific puzzles of terraforming other planets, politics in space, historical theories, and social morays in play in the year 2312. Robinson defines each corner of space. Mars is different from Mercury is different from Saturn is different from Venus–politically, socially, and in a palpable geographic and tonal way. It’s wonderful and deep and rich and I can tell that I would want to live on Saturn, Mercury, or in an aquatic Ascension terrarium, but definitely not on Mars or Venus. And there are a lot of Shakespeare references (and we know how much I love those)—and lots of references to other big literature and artists, people who shape culture. And while I love random Easter eggs, what I love even more are Easter Eggs that make sense and contribute to the story. And these references not only invoke the weight of the works they’re from—reinforcing that this story is more emotionally impactful than just a bunch of really cool spaceships (although there is a bunch of really cool spaceships)—they also do some of the work of that world building. I can imagine what the Mercurial high school curriculum would be. So, in short: the world building is baller.

The characters are pretty great–most notably Swan Er Hong (our Mercurial artist-heroine). I really like Swan. In some ways, she has elements of a MPDG (Manic Pixie Dream Girl), for indeed, she is a bit manic, and she’s actually an artist and sometimes full of whimsy and whatnot. But the crucial thing about Swan that makes her awesome is that she’s a fully fleshed-out main character, and she drives the narrative in her own right, instead of being the lesser, reflective satellite of a dominating male viewpoint. Beyond that, Swan’s a brash, weird, impulsive, warm-hearted person who has a past and a history that she has to answer to in subtle but important ways. She’s really really great to read. The other characters are well done too (Warham and Pauline are very different and still great), but it’s mostly Swan’s story.

The only thing that I thought could have been better was the plot. Don’t get me wrong, it wasn’t bad at all, but it got started a little slowly (not like I cared much at first, I was all “ooh! Descriptions of social morays!”), and even when it really gets going, it’s never VERY action packed. But that’s fine with me. I’m way more into the emotional musings than the actual plotting. This book is more a snapshot of the year 2312 and Swan’s involvement than a traditional narrative. There is a traditional narrative there–the story of Swan Er Hong figuring out what’s happening in 2312–but all of the best parts of the book are the parts that don’t fit neatly into the standard style of story telling. Robinson switches back and forth between narrating the book by following various characters, providing excerpts of various documents from the year 2312, lists, and quantum walks. It’s like reading a world instead of a traditional novel. Really, at the end of the day, there are no plot twists, no shock endings, and no real surprises. The plot is simple, straightforward, and even sparse. I firmly believe that this sparsity of events is what allows Robinson to delve more into the description of each circumstance, and to give us the emotional relevance of each moment. Because Robinson can write. It’s beautifully done, and if you let yourself, it’s easy and enthralling to become immersed in the fictional future of 2312.

In case you weren’t sure, I think you should find this book and read it. It’s the best science fiction book I’ve read in a long time, and even if you’re not usually a fan of the genre, this book just might convert you.