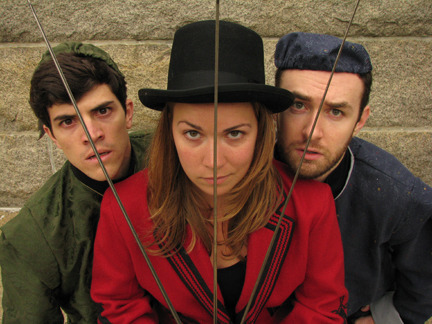 Rosencrantz and Guildenstern are Shouting

I have seen a lot of Shakespeare in parks, but I am fairly new to other theater presented outdoors. The last show I saw from Apollinaire was Cyrano de Bergerac, also in Mary O’Malley Park. Even though it was not Shakespeare, that text has a certain poetic bombast that doesn’t feel out of place when shouted earnestly. However, Rosencrantz and Guildenstern are Dead, a play with quick stichomythia making up a large percentage of the dialogue (as it is a play inspired by Beckett), stands to lose the hilarious speed and clever subtlety that makes the play great when delivered largely enough to read in an outdoor setting. All that said; I enjoyed the show. Ronald Lacey as Rosencrantz and Sean Cote as Guildenstern are able to carry the lumbering show, adding energy and great comedic timing. Everyone on stage seems to be giving it their best effort, and having fun – which goes a long way in making a show entertaining to watch.

The sets are well crafted, and they use site-specific locations for each act extremely well. The third act, which takes place on a boat, is set on dock on the river. They need no soundtrack to evoke water when the audience can hear, see, and smell it. The act also involves shipping crates, and the actors pop in and out of the crates to hilarious effect. It has a fantastic clown-car effect as more and more people issue forth from the crates. The second act’s set has a beautiful mural as their backdrop and a fascinating amount of lamps on stage. Castle servants bring lamps onto the stage, and subsequently light them, almost every time they enter. The lamp army grows to twelve by the end of the act, and I considered the metaphor of scenery closing in on Rosencrantz and Guildenstern, but missed the actors noting the encroaching furniture. Regardless, it is an intriguing way to deal with the oncoming darkness of night.

For audience members unfamiliar with the text, Rosencrantz and Guildenstern are helpfully dressed in color-swapped outfits (blue with green accents and green with blue accents), and the players who represent them sport the same colors and patterns. Overall, the costumes are great. Ophelia’s dress especially, a gorgeous white lace confection, impressed. The sound, provided by the troupe of players, is well placed. The instruments, though not played with overwhelming talent (a limitation of characters who can’t play, I’m sure the actor’s abilities are excellent) add musical accents to the dumb show, and garnered big laughs from the audience.

The production is at its strongest when it goes wholly into the absurd. For an outdoors production, I’m not surprised that the moments of silent acting play the best. The pirates and swashbuckling Hamlet running amok on stage, and the players rehearsing the dumb show were the strongest comedic scenes. The bigness necessary to reach the far away audience felt at home in these scenes, and the audience was alive with laughter. Christie Lee Gibson’s Hamlet was one of my favorites because she kept the Prince physically big but verbally small, and always on the edge of absurdity.

Although I think Rosencrantz and Guildenstern a dubious choice for a park production, the group does a good job bringing out different aspects of the play that you wouldn’t normally experience in an indoor setting. It’s was fun, light-hearted, and worth the trip to Chelsea.