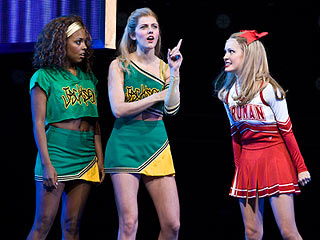 My friends always laugh at me when I tell them Bring it On is about race relations. Because, you know, it’s about cheerleaders. But it actually IS about race relations. That iconic 2000 film was a quotable, hilarious, rip-roaring exploration of urban race relations, gender roles and outsider assimilation conflict. It Was! Screenwriters of massive sellout studio projects are always layering depth like that into their work (everyone likes to feel like they’re contributing to the world, who says you can’t do that through a movie about cheerleaders?) and they’ve had widely varying degrees of success. I would argue that the original (“only”, if Hollywood were a more inventive place) Bring it On was a success in the let’s-make-this-somewhat-meaningful game. The great Gabrielle Union led her uber-talented Clovers to Nationals against all odds without help from anyone, and Kirsten Dunst’s Torrance (stupidest name in history) learned to stop being a naïve, overly competitive nincompoop. Meanwhile, rebellious Eliza Dushku found out that joining a team is not the same thing as surrendering your soul and traditionally girly activities don’t make you any less powerful of a person (a lesson also learned in a super-sub plot about male cheerleaders being manly). It was kind of a great movie. And by great movie I  mean a movie that is thoroughly entertaining on repeat watch while also not being completely devoid of substance. It was the best possible reality for a movie that was literally about cheerleading.

Because I’ve long been a totally accepting fan of the film, I had at least some faith that Bring It On: The Musical might not be a disaster. After all, the Legally Blonde musical is far from a disaster, in fact I completely love it (Blonde was a far better film than Bring it On to start with, but still, it gave me hope). Also, the musical pedigree of the folks tasked with turning this film which should not be a musical into a musical is damn impressive (including the likes of the Avenue Q, Next to Normal and In The Heights creators) and I knew the dancing/gymnastics would be fantastic, so I went in with high hopes. Alas, the secret to liking crappy musicals is to not go in with high hopes (I even managed to like Lord of the Rings: The Musical by going to the theatre with horrific review quotes floating around in my head!).

What I found at the newly re-named Ed Mirvish Theatre was a disaster of a product with a sensation of a cast. The music isn’t terrible and the dancing is as expected (meaning, awesome) but, my god!  those lyrics! It’s like they were written by the Glee staff! But Worse! I literally cannot express in words how horrifically cheesy, strained and stupid those lyrics are, I can only warn you that spontaneous mocking laughter is generally frowned upon in the mezzanine, though you might not be able to help yourself. The story (anything involving the English language, really) is equally disastrous. The somewhat interesting take on racially charged competition and awkward white guilt that runs through the film becomes a stupidly self-aware story about a white girl opening up the black kids to the enlightening world of competitive cheerleading (which, of course, changes their lives for the better). There’s a decent but under-written love story in which the one non-cheerleading kid gets Campbell (because all Bring it On leading ladies have to have dumb names) to realize that cheerleading (and, by extension, high school) doesn’t have life-and-death stakes, and the relationship between the tough black girl and the naïve white girl whom she doesn’t want to “try to save her” (until she swoops in and changes her world for the better anyway) at least grows with plausible tentative pacing.

I did appreciate that Campbell’s Act One boyfriend isn’t a bad guy (just a dumb guy) and he and her friends from her old school aren’t squashed in “former life” loser territory. The fact that said Act One boyfriend is played by So You Think You Can Dance favourite Neil Haskell is an unexpected delight. Taylor Louderman is a great leading lady and true triple threat, which is nice to see, playing Campbell with a Cher Horowitz quality that’s utterly appealing, even when she’s saying stupid crap. And she’s met by an overall excellent ensemble. Kate Rockwell (Skylar)’s voice is a bit grating and Ryann Redmond (Bridget)’s acting is too caricature but each makes up for it in other ways (Skylar by being the only naturally funny character on stage, Bridget by having a rafters-shaking singing voice). Adrienne Warren’s Danielle is acceptably awesome though nothing on Gabrielle Union’s no-nonsense character (whom the writers are clearly ripping off). Her sidekicks are also pretty fun between Ariana Debose’s monster voice and Gregory Haney’s general fabulousness (their “Aint No Thing” is probably the best song in the show). Cute-as-a-button Elle McLemore (Eva) makes for the least convincing villain in the history of the world, but that is entirely the fault of the atrocious writing and not the actress. The story has at least a little interesting dimension when it’s possible that Campbell is exaggerating Eva’s villainy (displacement, jealousy, paranoia- all more interesting than basic victimization) but that possibility is taken away pretty darn quickly.

In the opening number there’s one small hint at the entire Eliza Dushku storyline from the film (aka the most successful storyline from the film) and the rest of the plot I understand to be taken from those direct-to-dvd sequels noone (including myself) saw. Why? Why would you make a Bring it On musical and not use the plot of the generally well-plotted film? If you couldn’t clear the rights, then, I don’t know, maybe don’t make a Bring it On musical! Story story story, people. I don’t care how well your kids can dance or whether the funny sidekick can hit insane belt notes or how many beloved SYTYCD alums you can draw- if you don’t tell me a story at least halfway worth watching, I’m out. Bring it On is, at best, a mild diversion, at worst, a Massive Wast of Time and Resources. It’s amazing to me that someone, anyone, during the surely long and surely expensive development process didn’t think to say “hey, you know what? This might completely blow”- why didn’t anyone think to say that? Because, maybe then, there might have been at least a little course-correcting that got done. As it is, you’re better off curling up with a bowl of popcorn and a warm blanket (cause, you know, “brr, it’s cold in here, there must be some Toros in the atmostphere”!)  to watch the surprisingly thoughtful film that spawned this musical atrocity.

After all, is there anything better than this?:

“I’m sexy, I’m cute, I’m popular to boot… Don’t hate me ‘cause I’m beautiful, well we don’t like you either, we’re cheerleaders. We Are Cheerleaders”.

*If you don’t get this joke, go fix it and never see Captain America the same way again.