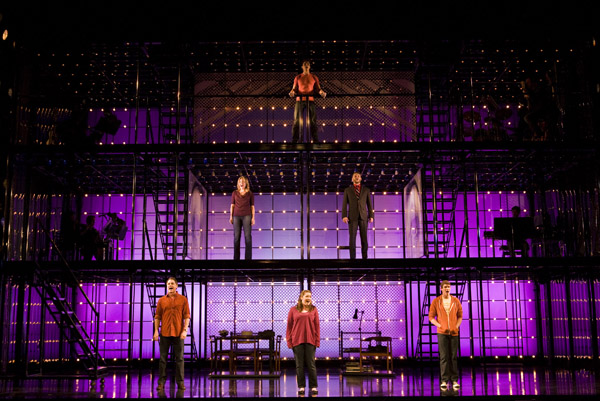 Next to Normal at the Opera House

Next to Normal is one of those pieces that, no matter what you do with it, ultimately comes down to the actors. You can place it on a cool, versatile and modern set, you can dress it up with colour-coded costumes and loud rock music, you can place it in the biggest venue available. Ultimately it’s a small story in the hands of 6 people.

In the touring production currently playing at the Four Seasons Centre, those 6 people achieve varied amounts of success for the uneven but entertaining Dancap production.

In the leading role of mentally ill Diana, the production boasts Alice Ripley, who won a Tony for the role during its original Broadway run. It is a crazy hard acting role and I’ll be the first to admit that Ripley attacks the character with everything she’s got. But I just can’t get over the strangeness of her singing voice. It’s as though she’s forcing all her notes down to avoid them coming out sharp, but the result is that it’s next to impossible to hear what she’s saying. Brian Yorkey’s wonderful lyrics are completely lost in Ripley’s hands and thus Diana gets lost too.

The men in the principle love stories are clear enough but neither brings much gravitas to their role. Preston Sadleir’s Henry is wonderfully sweet. He’s endearing and engaging and all sorts of lovely things. What he’s not, however, is a full fleshed out individual. I never really understood why he was staying, why he loved Natalie so much, I just understood that it was really nice that he did. As a symbol of all that’s positive and healthy in Natalie’s life, Sadleir delivers an excellent performance. As a character that comes close to matching her depth, he falls short. Asa Somers faces a similar challenge as Dan. Enunciation issues aside, Ripley is a fierce Diana- loud and forceful, frantic in her desperation. A flimsy Dan doesn’t stand a chance of making sense next to her and Somers is just a little too lightweight to handle the grounding responsibility that defines Dan as a character. He needs to weigh her down but instead gets dragged behind her like a slightly resistant kite string.

Jeremy Kushnier fares much better as Diana’s doctor. With the best voice in the cast, he gets at the heart of the character’s sympathy but also portrays a frustrating detachment that haunts you on behalf of Diana. He also breaks out perfectly in his fantasy-sequence rock star moments.

I’m not sure how I feel about Curt Hansen in the key role of Gabe. My friend who didn’t know the show’s major twist was surprised in just the right moment, which I suppose is a major credit to Hansen’s subtlety, but to be honest I’m a little surprised that his highly stylized movement didn’t give him away. With a chiseled face, sculpted hair and a perfect body, Hansen’s appearance is idealized to the point of looking manufactured. Pair that with the highly choreographed blocking and the effect is a rather creepy one, poignantly touching on the reality of Gabe’s role in his mother’s life. An unstoppable voice would be the cherry on top of the strangely perfect performance, but Hansen’s own slightly-flawed wail creates a small sense of humanity in the character.

The highlight, however, is Emma Hunton as Natalie. Listening to just the soundtrack, I’d never before realized that the real emotional arc of the piece belongs to the neglected daughter. Diana’s struggle is more obvious but less perspective-altering and Dan’s arc is one of standing still. It’s Natalie whose journey we’re on. It took a standout performer like Hunton to make me realize that. With a rafter-shattering voice and incredible timing, the darkly comic actress delivers a brilliant, pain-filled performance that really stays with you. She changed how I viewed the entire play, a real feat, especially for a young actress in a seemingly supporting role.

When it comes down to it, Next to Normal has been brought to entirely the wrong space. The opera house is massive, light, airy and open. The intimate 6-person musical doesn’t fill the space it’s given and the audience is too far away to appreciate whatever detailed character work the actors achieve while making their way through the anguish of the difficult story. It’s an actor’s musical and anyone other than the first 3 rows of that opera house can’t appreciate the actors’ work.