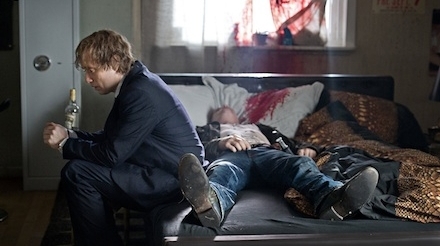 While American politicians abjectly deride the Scandinavians for being ‘pinko commies’, Hollywood has been taking notice of their considerable cinematic talent, finding every opportunity to import some of their best films for American remakes. David Fincher’s The Girl with the Dragon Tattoo and Matt Reeves’ Let Me In are excellent examples, but no Scandinavian film will appeal to North American sensibilities more than Norway’s Headhunters.

The film stars Aksel Hennie as the titular headhunter, an enigma of a man who recruits corporate talent by day and steals valuable art pieces by night. When his wife (Synnøve Macody Lund), herself an art dealer, introduces him to an ex-intelligence mercenary turned electronics tycoon (Nikolaj Coster-Waldau) at an art exhibit, his interest is piqued when he learns said tycoon is in possession of an invaluable painting.

Things take a turn for the worse, however, when, while trying to steal the painting, he discovers something at the man’s house that turns him into the prey in his very own manhunt.

In the beginning, Headhunters is an engrossing character study. Vain, libertine, bourgeois, and unabashedly pretentious, the film’s protagonists is the Norwegian equivalent of Don Draper, an introvert who rationalizes his deep emotional problems by indulging in decadence and debauchery.

At only 1.68 m tall, it’s suggested that his proclivity for extravagance stems from a hyperactive Napoleon complex (his wife is stunning, and considerably taller). In fact, sexuality becomes a driving force in the film, elucidating character motives and thematic concepts. Although not as comprehensive as American Beauty, the film’s use of sexuality as a leitmotif provides an interesting dimension to what is otherwise a straightforward thriller.

So it’s bittersweet, really, when the film eventually departs from this careful dissection and moves onto the aforementioned manhunt. But even then, the film still manages to surprise.

Initially, the sense of foreboding and trepidation mirrors that of Michael Clayton, creating an amazing amount of tension and suspense. But somehow, the film pulls off an unfathomable tonal shift, making the devolving misadventures and dark comedy in Fargo pale in comparison.

The film’s ability to seamlessly switch back and forth from these antithetical tones is one of its major achievements, never allowing itself to feel redundant, tedious or banal. Taken as an experience, the film excels in entertaining, and as an intellectual exercise, it also succeeds with social and political commentary, as well as with Freudian ideas of sexuality.

With a lead character named Roger Brown, an actor that looks like a young Steve Buscemi, and a narrative that borrows from well known Hollywood thrillers, Headhunters not only merits a remake, it’s all but inevitable.

But with Mark Wahlberg set to star in the Hollywood version, the remake (by definition) will be inferior, so see the original Headhunters first, so you can be a snob to all your friends by saying the Scandinavian version was better.