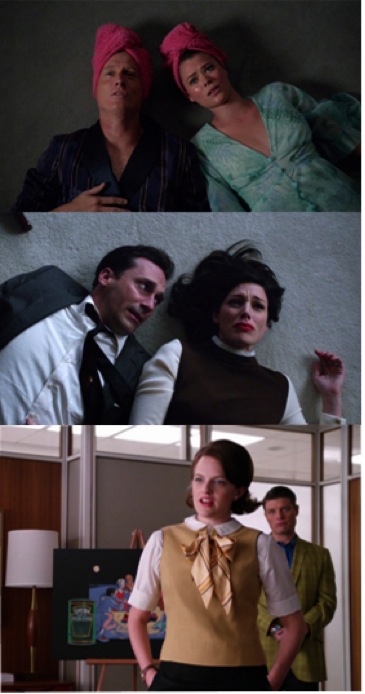 Sadness and Struggle, in Three Parts

This week’s episode of Mad Men was kind of a bummer. A beautiful, poignant, heart wrenching bummer.

We start with Peggy, all primed to deal with the dipshits from Hein with a new pitch. She wakes up, and immediately gets in the same fight with her boyfriend that she seems to get into with every love interest. Namely, Peggy is awesome and career oriented, and they don’t understand that. Okay, also she’s kind of a bitch and doesn’t make any time for the men in her life. Mostly, though, the awesome part. She heads into  work already bummed out, and then her team gets on her case (I still love her chemistry with the Stan, who may be a misogynist weirdo, but who is also strangely endearing). By the time she walks into that all important Heinz meeting, Peggy needed a win.

Heinz is not a win for Peggy. Don ducks out in order to go on vacation with Meghan. Heinz shoots Peggy down, and when Peggy tries to pull of the Don Draper hard sell, Heinz all but tells her he’d hit her if she weren’t a lady. The scene where Peggy struggles not to cry, and pulls it off with steely determination, is some Emmy-caliber acting from Elizabeth Moss. Peggy’s response to her professional disappointment, escaping to a movie theater where she shares a joint with a random stranger and then gives him a hand job, is probably not high-caliber. Peggy returns from the movies, passes out on a couch at SCDP, and then has a strange and terrible conversation on the origin of Michael Ginsberg. There’s a lot going on with Ginsberg, and I’m excited to see it explored more, but here has potentially tragic past is played mostly for the way it shakes Peggy out of her ennui. Then, she goes home and begs her boyfriend to come over, telling him she “always needs him.” Gone is the woman from that same morning who seemed ready to chuck the relationship rather than deal with anymore of his whining.

From there we cut to the saga of Roger Sterling. After unsuccessfully trying to lobby Don into a boys’ weekend, Roger heads home where wife Jane forces him to what he believes is a normal, boring, stuffy social gathering. Turns out, it’s actually a group LSD trip where Jane wants to be “alone in the truth” with him. In a long and perfectly subtle series of scenes, Jane and Roger circle the truth of their crumbling marriage until they both spell out exactly how unhappy they are. The next morning, Roger wakes up elated and ready to leave. Jane, the LSD effects wearing off, craves the momentary closeness of the last night, but it’s too late. The drugs freed Roger from his inertia, and there’s no turning back for the two now.

Lastly, we have Don and Meghan. First, Don shanghais Meghan away from her job in favor of taking a spontaneous vacation with him. The two head up to a Howard Johnson near the Canadian border, where Don continues trying to force his version of the perfect vacation on Meghan until she snaps. Meghan’s pissed that Don has all the power in their relationship, pissed that he doesn’t value her at work, and pissed that he seems more interested in some idea of propriety than in her.  The moment reveals all the tiny fissures brewing in their marriage, fissures greater than Don’s past penchant for infidelity could possibly create. When Meghan responds to a crack about her own mother with an ill-timed “and where’s your mother?”, Don’s face crumbles and he’s broken. He takes off in his car, stranding his young wife at the Howard Johnson.

It’s Don’s greatest desire to recreate the idyllic American life that he craved back when he was an orphaned whore’s son. It’s why he continually tries to force Meghan, who wants to be a 60s career woman, not a house wife, into the role that Betty Draper craved. And it’s his greatest fear that when people learn of his low past, it will crumble his hard fought present. So Meghan’s off hand cruelty, coupled with her refusal to see the value in Don’s HoJo and Orange Sherbet, is a complete dismissal of all that Don works for.

Still, Don spends the next six hours regretting that decision. He paces the Howard Johnson searching for Meghan, waiting for her response, begging for clues. He arrives home to find that Meghan is already there, and that she’s locked him out. He kicks down the door and bursts into the apartment, and for the next five minutes he chases Meghan around with a terrifying mixture of hurt and anger. I’m glad the episode didn’t go for the violent end it could have, but the actual end was just as depressing. Meghan and Don are slowly shifting out of happiness, and there’s a definite sense that this might be inevitable. As Don clings to Meghan as she tries to leave for work, he’s trying to cling to a moment that may already be gone.

And so I return to my first point – this episode was depressing as hell. The only person left happy at the end of the episode is the man who just decided to get divorced from his wife. Peggy and Don, striving as they have been for the past five seasons to combine their brilliance and charm with a successful home life, seem no closer to the happiness and stability they crave than they were when Peggy first wandered into Sterling Cooper. And as that last, beautiful image of Don standing alone in the conference room while the episode passes him by can attest, the world outside speeds by them, uncaring, as they struggle.