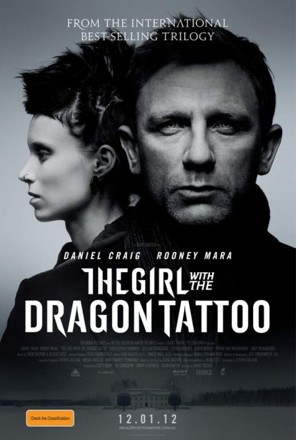 The Nipple-Pierced Heart & The Dragon Tattoo

Steig Larson’s Girl With the Dragon Tattoo is a fast-paced, utterly engrossing, reactionarily feminist mystery novel, with a charismatic leading man and a fascinating lead female. But Larson’s novel falls off when you start thinking about writing style, thematic brilliance, or overall writerly aptitude.

David Fincher’s Girl With the Dragon Tattoo, in contrast, is almost all slick style and directorial panache. His vision of this world is so all-encompassing that even just the score (produced masterfully by Trent Reznor and Atticus Ross) is enough to put you immediately in the right frame of mind. In condensing the somewhat unwieldy book into the two and a half hour movie, Fincher gutted or condensed a lot of the backstory (including a whole romantic subplot, but the movie’s not exactly light on sex scenes as it stands) and in turn managed to create a film that is a lot more tense, moving, and accomplished than its literary counterpart.

And while a lot of that praise should be laid at Fincher’s feet, the movie would be nothing without its titular character, Lisbeth Salander (much like the book, which would probably be passed over as sensationalistic trash if it didn’t also feature Ms. Salander). Rooney Mara’s fearless, breathtaking performance anchors the film, and, combined with Fincher’s direction, makes for a movie-going experience that feels much more transcendental than it actually is.

Girl With a Dragoon Tattoo, at this point, is pretty much a mainstream book hit, but it’s also a deeply unpleasant experience, full of rape, torture, murder, incest, and deception. The movie doesn’t shy away from any of these themes, nor from Larson’s simplistic view of the universe as either “omni-sexual good guys” or “c-word-dropping potential rapists,” but it embraces the prickly contrast at the heart of Salandar’s world: she’s a woman who’s been so profoundly damaged by the world around her that she’s retreated into a spiky-haired shell of her own devising, but who is still looking for light and goodness in this world. Girl With the Dragon Tattoo revels in its spiky-haired casing, while also telling a hero action story that features costume changes and exciting action climaxes. Fincher’s steady hand, and Mara’s unshakable performance, are what allow this contrast to feel like such a compelling, if difficult, film.