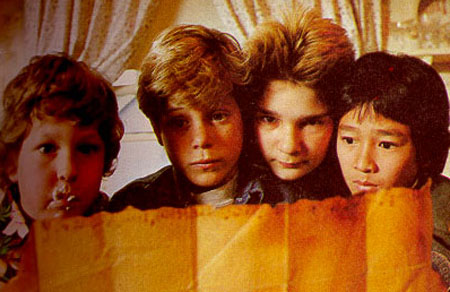 In Defense Of Growing Up

For me, the greatest kid’s film in the world was made in 1985 and starred a rag-tag group of adolescents trying to save their town from greedy country club owners.  The Goonies literally shaped my childhood.  I had it on VHS and watched it so many times that the opening seven minutes and closing fifteen wore completely out.  It was the first DVD I purchased and, to this day, whenever life gets tough, I pop it in and immediately smile.

In The Goonies no one dies.  No one gets anything but feelings hurt, and in the end good guys win, bad guys lose, and a 13-year-old fat kid adopts a mentally challenged man.  There is a certain magic in stories of childhood adventure.  The tropes of the underdog hero, the overweight buddy, and the nubile love interest are what shaped late 80s and early 90s youth.  It’s what made me a man today and what made my days in the woods searching for buried treasure, pirate ships, and cracking my imaginary bull whip so perfect.

That is why, with much chagrin, I must be critical and harsh when people call The Hunger Games a kids movie and I am even more mad that when I went to see it, I sat next to a child.  I’m all for art, completely against censorship, and willing to bend my mind around the strangest of topics (I liked Tree Of Life!) but, when it comes to good old-fashioned family films, I am appalled that The Hunger Games was made accessible to those under 17.

You will never be able to convince me that a film about families who are starving so much that they are willing to offer their 12-18 year old children as fodder for bloodsport is and should be suitable for anyone who is not an adult.  We live in a tough time where growing up with the Internet has made all kinds of social realities accessible at the touch of a button.  There are dead bodies shipped home from war every month, invisible children dominating the Internet, and reality television bringing other peoples’ problems into out homes.  In a month where the MPAA has decided a documentary about kids bullying each other in such drastic ways that it caused an eleven year old to kill himself would only be accessible to those children’s parents, it causes me great stress to know the same board thinks that it’s okay for pubescent children to watch the same demographic eliminate each other in an arena (in a fictitious world).

What happened to growing up?  In today’s film society it seems like the division has become little children or adult.  Don’t argue Harry Potter because after the first film the body count began to soar.  By the seventh film we were watching carnage on Civil War level and the same goes with the pro-life/abortion debate in Twilight.  What happened to the happy ending?  What happened to riding off into the sunset, getting the girl, and the high five? Why are we suddenly pushing kids to become adults faster?

I’ve got some old news for everyone.  The real world sucks.   There’s war, famine, jealousy, hate, adultery, genocide, and the list goes on.  When I need to escape those things I head for The Goonies, not to be ignorant of the real world but to be reminded that, if we all pitch in, sometimes something magical can happen.  Sometimes good does triumph, the underdog does fly, and pirate ships do sail.  Sometimes even if you don’t have all the money, cars, or looks, you can have a great time.  Sometimes all you need are friends, family, and a little bit of gumption.