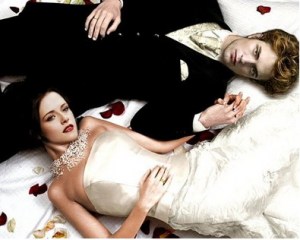 I did not see the new Twilight movie at midnight. But I would have.

Here’s the thing. I get your point, hypothetical Twilight-hater. I don’t think that Bella and Edward have a particularly healthy relationship (in fact, I could and have written pages and pages on the anti-empowerment message the books so often embody). I don’t think the writing’s particularly good. The movies are essentially hours-long excuses to make Robert Pattinson look moodily gorgeous and Taylor Lautner take off his shirt. And the plot of Breaking Dawn could be the stupidest yet, with Bella losing her virginity, in a way that’s guaranteed to make even sex-positive feminists squeamish, before growing mystically pregnant. But my question remains… why do we hate on Twilight so much?

The easy answer is because it’s popular, and it’s popular with a particularly vocal group of annoying consumers. It’s hard not to bristle at the idea that millions of teen girls are so obsessed with a book series that seems to encourage completely losing yourself in an abusive relationship, while simultaneously cutting ties with your family. And there’s a certain, “WON’T ANYONE THINK ABOUT THE CHILDREN?!” style logic to the amount of anger this generates in both hipsters and feminists alike. It seems like a dangerous message to be giving our teen girls.

But at the end of the day, Twilight is also a stealthily enjoyable series that means a lot to a lot of young women (and men, I don’t mean to be all heteronormative). And while I don’t think any work of fiction is actually harmless, since all works have a viewpoint that they are trying to make you explore along with them, Twilight IS NOT propaganda that will turn your healthy, well-adjusted daughter into a sex-after-marriage crazed masochist. It can totally be a jumping-off point for talking about women’s roles in fiction, or the role of genre fiction within books in general, or even a way to convince someone that they should really check out Buffy the Vampire Slayer. But it’s not the end all and be all of anyone’s fictional life, and the adoration of Twilight doesn’t cancel out opportunities for greater literary advancement.

The hate we feel the need to pile on Twilight (and I have definitely been guilty of it in the past) is, frankly, kind of stupid. Feel free to pull apart the merits of the film, or to talk about its negative messages towards girls, or to destroy the awkward prose Stephanie Meyers uses. But at the end of the day, the movies and books are about being in love, being an idiot, and having really hot boys fight over you. It’s escapist fiction, not Mormon propaganda, and should be treated with the same level of analytic distance that critics and consumers bring to similarly flawed, similarly absurdly popular properties (that’s right Transformers, I’m looking at you). I plan on doing just that when I get around to seeing the movie on Tuesday, for $5 bargain movie night.

I recently got the opportunity as part of My Entertainment World to participate in a conference call with author Neil Gaiman, the mere mention of whom normally serves to establish your “cool kid” credentials. And I think he explained, better than I ever could, why it is so silly to spend our time obsessing over how “bad” Twilight is. “The truth is that when kids encounter books, they bring themselves to them. And the place that you’re going to find the magic can be anywhere, it doesn’t have to be in a great book, because you’re bringing yourself as a reader to it.”* At the end of the day, there are definitely things that I could pick on in Twilight, and I do occasionally, but the vast majority of its fans are bringing their own version of the world (their own hopes, dreams, and neuroses) to the story, and that’s where the magic lives.

On a side note, get excited for The Hunger Games, where hipsters and feminists can resume their normal roles of quietly hating each other, as hipsters think HG is now too mainstream, and feminists think it’s the second coming of Gloria Steinem.

*Note: Neil Gaiman was not talking about Twilight in this quote, just the state of Young Adult Literature in general.