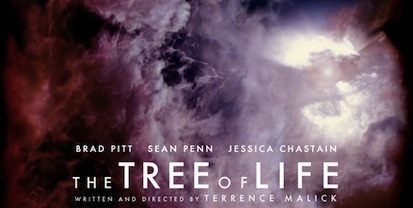 The Tree Of Life

I’m not sure Terrence Malick believes in God but he most certainly believes in the power of cinema.

After sitting through the two-and-a-half hour non-linear story of existence and how it means nothing in the grand scheme of the universe but means everything to the people existing, I went home, showered, and saw it again the next day.

The Tree Of Life, directed by Terrence Malick, is a meditation on existence. A film so beautiful it belongs playing on repeat in the MOMA. If you were going to give it a basic story, and nothing in this film is basic, you could say it’s a three-part coming-of-age tale that flies between a boy becoming a man, a man accepting a death, and the world coming into existence. The film has an operatic score that is definitely over-the-top and reminiscent of angelic choirs, but in a movie that literally begins at the big bang, you would not expect anything less.

While the film is being ballyhooed internationally it is safe to say it will polarize any audience. While many critics laud the film’s efforts there is a large contingency that considers the story masturbatory and exclusive. Theaters across America have run disclaimers about the non-linear structure and extended periods where no human appears on screen. There are roughly five instances in this film where for fifteen minutes or more there is only opera and visuals.

Nevertheless, what you are left with is certainly a masterpiece. If you believe in the power of cinema and its ability to elicit emotions The Tree Of Life will certainly move you. Though it is hard to find nuance in such an over-arching endeavor, one must look close at the performances by Brad Pitt and Sean Penn for the juxtaposition of weakness and power.

The opening of the film posits that there are two ways to live; the way of Nature and the way of Grace. The Tree Of Life proves Terrence Malick knows nothing and simultaneously every about both. It is a film that makes you question your own being. That alone is worth the price of admission.

Author’s note: This film demands to be seen on the biggest screen possible.