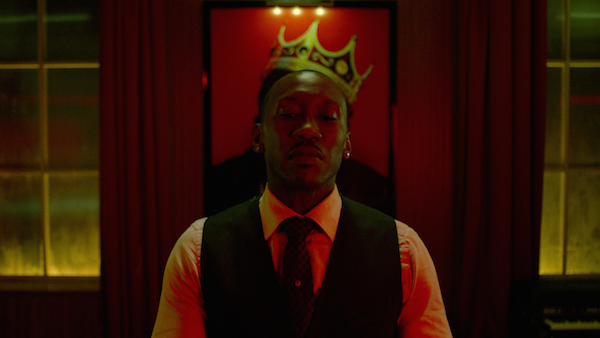 Luke Cage: And the Band Played On

There’s a lot to love about this series. The way it deals with society’s criminalization of clothing, of black culture and black people. The heavy stylizing of Harlem and the characters who inhabit it, going past caricature and into something deeper, into what it means to be black. But I think my favorite part of Luke Cage is the music. You’ve got A Tribe Called Quest scoring the whole show, for one, so you know the soundtrack is going to have the hits you love, the old school sounds and the R&B charters. But where so many shows use sound cues to manipulate an audience, to induce jump scares and dramatic tension, the music of Luke Cage adds dimension to the world.

The best way dimension is created, of course, is by adding depth. Depth is achieved in sound by using, to be blunt, a whole hell of a lot of sounds, songs, and tracks. Tunefind.com shows 17 different songs used in just the first episode of the series. Ernie and the Top Notes, Coleman Hawkins, Nas, even Nirvana and Mike Snow show up in the background. In later episodes, Rakim, EPDM, De La Soul, MC Lyte, 2Pac and many, many others are featured. It’s a rich tapestry of the black music scene, an exploration and celebration and exultation in soundspace. True, it’s all playing while Luke is smashing people through walls, Cottonmouth is throwing people off of buildings, or while Diamondback is being extra creepy. But there’s a point to it. Everyone in the show is struggling with Harlem, with what the face of black culture looks like, will look like, has looked like. But the music of Luke Cage represents an eternal image of creativity and renewal, of self-expression and political outcry. One Harlem is shown to be fragile, made of brick and mortar that’s constantly being demolished by man, machine or rocket launcher. But the other Harlem, the musical one, is enduring, resilient, and ever-new.

This, of course, is what the music in Luke Cage means to us. But there is a live score in the show as well, and the musicians do have an impact on the narrative. Raphael Saadiq, the sultry R&B singer, is the first one to take the stage in Harlem’s Paradise, the club owned by the gangster Cottonmouth. He’s later joined by Faith Evans, the living legend Charles Bradley, even the Delfonics take the stage after Cottonmouth has his head bashed in against it. Each singer tells a different story for the episode they appear in. Saadiq gives us the sweet romance that lets Misty and Luke find each other and bond over his music. Charles Bradley’s tunes are about the gangster life, and his oft-repeated “aint it a sin” does make us beg the question as we watch the thugs and hoodlums tear the city apart. Faith Evans sings to us about love gained and lost, and we see what it does to Cornell Stokes, we see how much he loves music, the singers and performers who come to his club. This isn’t Luke Cage being excited to run into Method Man on the streets, or the old timers rhapsodizing about their heydays. Cornell had a dream to be a musician, to pull tunes out of thin air and get out of the Harlem he knew, full of crime and death. From his perspective, this life was forced upon him, so he became the kind of man who could survive that life: tough, unforgiving and bloodthirsty. He is reckless (who throws a man off the roof of the club he owns?), he is brutal, but it is his reaction to the world that he sees. Music is not, however, a part of that reaction. It is his escape, his commitment to something better. It might be the one thing him and Luke see eye to eye on, too.

There is one artist, though, whose appearance in Harlem’s Paradise represents a confluence of Cottonmouth’s world with Cornell Stokes’ purer dream for Harlem. Jidenna, with his performance of “Long Live the Chief,” steals the show and is my favorite singer from Luke Cage. The scene is striking: no one in the audience, save for Cottonmouth with a thousand-mile stare and Shades waiting for the song to end. Jidenna, dressed in his typical finery, matches Cottonmouth. They are both successful, smart and well-dressed. The scene weaves between Claire Temple’s reunion with Harlem, Luke’s sifting through the rubble of his home, and “Long Live the Chief.” The message, for Cottonmouth, is clear: “cockroaches and the rat shit/hand me downs with the patches” are those who would take this world away, the life he has built, the criminal empire he’s inherited. He is the chief, at that time, in that moment. Diamondback is a distant concern at this point in the series, Luke Cage is a serious annoyance, and his cousin, Mariah is just nagging him. But Cottonmouth is getting himself pumped up for a meeting with his crew, listening to Jidenna point to him when he says “Long Live the Chief,” and he can feel it. “Lil boys bang bang” and “niggas wanna be the king” – it’s all beneath him, this conflict, this struggle to be on top, because in the end, Cottonmouth will always be on top and he knows it. It’s such a telling moment in Luke Cage, where the music Cornell loved comes to represent the life and times of Cottonmouth, the man who had to outlast the boy. Jidenna is the last artist to play in Harlem’s Paradise before *spoiler alert* Cornell’s death, and the song becomes very obvious – we only say “Long Live the Chief” when the title is passing.