The Wonderful Wizard of Oz Drops Down on Boston 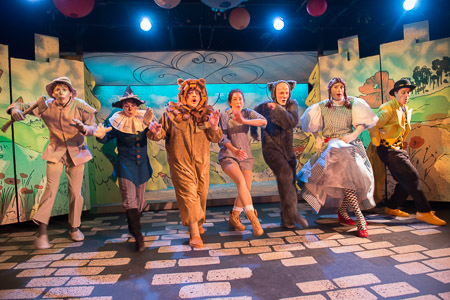 The imaginary beasts are back this January with their seasonal Winter Panto. This year they present the story of The Wonderful Wizard of Oz, the well-loved classic by L. Frank Baum, and proceed to shake it up in true panto style. References to Beyoncé, State Farm Insurance, and Hamilton bubble easily to the surface, as giddy, humorous, and unpredictable as the appearances of Glinda the Good Witch (Kiki Samko).

A panto, a beloved UK theatrical tradition, takes familiar fairy tales and breathes new life into them through improvisation and audience participation. No two performances are alike, and it is up to the audience to support the goodies, boo the baddies, and make sure everything ends up A-OK in the end.

The twists hit early in this panto. The curtain rises, and we meet the Royal Historian (Bob Mussett), who is stunned to see that his encyclopedic reference copy of The Wonderful Wizard of Oz is missing pages and is all scrambled up. The culprit is his assistant, Scraps (Molly Kimmerling), a well-meaning patchwork girl who hungers to be a Great Herstorian. Her antics mean the story is narrated improperly, and characters and plots are all mixed-up.

As best they can, our favorite characters play their parts. Young Dorothy of Kansas (Sarah Gazdowicz), afeared for her beloved yet gravely misunderstood canine companion, Toto (William Schuller) tries to convince her Auntie Em (Joey Pelletier) and the farmhands (Amy Meyer, Michael Chodos, and Cameron Cronin) to protect the pooch from the evil Miss Gulch (Matthew Woods) and her creepy dog catcher (Mikey DiLoreto). While the ineffectual sheriff (Noah Simes) can’t help them, a tornado comes to their aid, sweeping everyone away.

The fact that the story is so well known created an interesting challenge in terms of upending audience expectations. Some techniques were effective and amusing (e.g., Auntie Em joins Dorothy and her friends in their adventures in Oz); others were a little too silly or not as interesting (e.g., dragging in the Nome King (Libby Schap) from Ozma of Oz to add spice to the plot).

For the most part, the changes leaned more towards amusing. Tattypoo, the Wicked Witch of the East (Elizabeth Pearson), is very existentially confused, even post-house drop. Glinda is delightfully maniacal and menacing, and seems to hit up the bubbly too often. The poor Tin Man (Chodos) can’t escape the unwanted attentions of Auntie Em. On the flip side, our friendly neighborhood Scarecrow (Meyer) and Scraps fall in love at first sight. And if all that weren’t enough, we get a revealing glimpse of the fascinating inner life of Toto.

The biggest drawback of the show was the sound. It was hard to hear some of the performers, particularly at the beginning, and they were often drowned out by ever-present clips of music. While the sound was irregular, the rest of the staging boosted the show. Cotton Talbot-Minkin designed costumes in full technicolor glory, and the modest set included doors designed to look like the spines of all the Oz books, which opened and closed onto various single place-setting props, for ease of scene change (scenic design by Christopher Bocchiaro and Matthew Woods).

Pantos allow us to enjoy what would seem like gimmicks or slips in other shows. We welcome brief breaks in characters—I perked up at moments where actors corpsed or called out audience members (Schuller shouted out a mention of fellow actor Chris Larson, who was sitting in the audience the night I attended). We all nod wistfully at reminders of Boston’s evil winter of 2015, at traffic on I-93, of allusions to “Hotline Bling,” Bernie Sanders, Call of Duty, and Donald Trump’s hair. And I don’t think anyone laughed louder than I (except maybe this older gentlemen to my left) when a brief allusion to this year’s Miss Universe competition came up.

One of the best things to look forward to in a panto is what speaks directly to you. imaginary beasts may bring us together as a community, but you also have your chance to see what in our mutual experiences matters to you. So before a surprise blizzard comes to snow us all in, make sure you drop by the BCA Plaza Black Box Theatre to get some hearty laughs in first.

imaginary beasts’ production of The Wonderful Wizard of Oz is playing now through January 30th, 2016, at the Plaza Black Box Theatre.

Mission Uganda Accomplished?
My Theatre Award Nominee: Q&A w/ Jacqui Dupré
Side by Side by Sondheim at the Jack Studio Theatre